The change would ensure that the business of Congress could go on during crises such as the coronavirus pandemic. 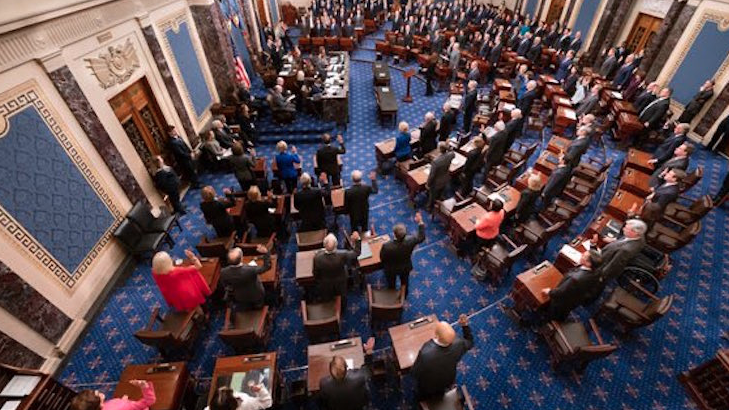 Multiple members of the House have reported positive tests or exposure to the coronavirus, the worst being 45-year-old Utah Democrat Ben McAdams, who was hospitalized with breathing troubles over the weekend. In the Senate, Rand Paul has tested positive, and Amy Klobuchar reported that her husband is hospitalized and receiving oxygen.

It’s time for Congress to follow the rest of the country and work remotely. That means taking unprecedented steps that both houses have resisted for years. While it would be a good thing to expand remote voting capacity permanently, now is not the time to leverage a crisis into long-term reforms; short-term measures that prove workable can be assessed later for their long-term viability. Remote voting should be passed immediately as a short-term emergency measure and reevaluated after the present crisis has passed.

Remote voting could never be a full substitute for the presence of Congress in Washington. Our representatives frequently need to meet with each other and their staffs and receive briefings, many of them involving information that is more securely delivered in person in the Capitol than over any network. Public hearings require physical presence. But much of Congress’s staff work could already be done outside of D.C., and the challenges of security for 535 people voting on bills are not significant. If necessary, each member could still have a (younger, D.C.-resident) staff proxy on site to verify the vote cast. Remote voting would ensure that the business of Congress could go on without large physical gatherings of infected or vulnerable representatives. If it proves workable, it could also lengthen the amount of time members of Congress could spend in their home states and districts without ignoring their core duties.

The need is bipartisan, but it would prevent the vagaries of illness from unsettling the partisan balance of power. President Trump has supported the idea, and Dick Durbin and Rob Portman have proposed a resolution:

Durbin called for establishing “a verifiable technology and procedure so members do not have to be physically present.” “Five of our Senate colleagues were unable to come to the floor of the Senate and vote because they’re in self-quarantine at this moment,” he said. “The numbers could grow to the point it could reach an extreme where there’s a question of an actual quorum on the floor of the Senate.”

Portman and Durbin’s resolution would give the Senate majority and minority leaders joint authority to allow secure remote voting for up to 30 days during emergency situations such as the current pandemic. Under the measure, the Senate could vote to extend the initial authority in additional 30-day increments.

The need in the case of the Senate should be particularly obvious: Five Senators are between the ages of 83 and 86, and more than a quarter of the chamber is age 70 or over. Senate traditionalists such as Mitch McConnell and Roy Blunt have thus far proven resistant, given their hesitance to open broader questions about changing the rules, but they should reconsider given the exigencies of the situation.

The Constitution should not be an insuperable obstacle, although it might preclude either House from going to remote voting without the other. Article I, Sections 4-5 provide:

The Congress shall assemble at least once in every Year, and such Meeting shall be on the first Monday in December, unless they shall by Law appoint a different Day [which they have]. [In each House], a Majority of each shall constitute a Quorum to do Business; but a smaller Number may adjourn from day to day, and may be authorized to compel the Attendance of absent Members, in such Manner, and under such Penalties as each House may provide. Each House may determine the Rules of its Proceedings. . . . Each House shall keep a Journal of its Proceedings, and from time to time publish the same, excepting such Parts as may in their Judgment require Secrecy; and the Yeas and Nays of the Members of either House on any question shall, at the Desire of one fifth of those Present, be entered on the Journal. Neither House, during the Session of Congress, shall, without the Consent of the other, adjourn for more than three days, nor to any other Place than that in which the two Houses shall be sitting.

Obviously, when the Framers wrote the requirements that Congress “assemble” and do so in the same “Place,” and that various rules be determined by those “present,” they anticipated physically assembling in the same location. But nobody in 1787 would have thought that this excludedpresence by telecommunication, as no such thing was possible at the time. The best methods of long-distance communication in America in 1787 were crude tools such as smoke signals. Samuel Morse’s telegraph would not be invented for another half a century; its French predecessor was not publicly demonstrated until 1793. Constitutional interpretation typically tries to apply old rules to new technology by finding analogous Founding-era practices, but there is really no contemporary analogue to being present in a legislative chamber by remote technology. The best answer is instead to leave interpretation of these requirements to the House and Senate themselves.

The Court gave strong weight to the Senate’s determination that it was not in recess during the pro forma sessions, notwithstanding the fact that it was transparently engaged in a legalistic interpretation of a “session” in order to thwart the president. The Court stressed “the Constitution’s broad delegation of authority to the Senate to determine how and when to conduct its business”:

The Constitution . . . gives the Senate wide latitude to determine whether and when to have a session, as well as how to conduct the session . . . when the Journal of the Senate indicates that a quorum was present, under a valid Senate rule, at the time the Senate passed a bill, we will not consider an argument that a quorum was not, in fact, present.

The Court emphasized that its deference may not be absolute in every case, but in Noel Canning, it considered the question closed so long as the Senate was sufficiently present to be capable of doing business. If both chambers changed their rules to consider remotely present members to be present and able to vote, that standard would be satisfied.

The business of the nation requires Congress to remain on duty during a crisis such as this one. Changing the rules to ensure the functioning of the national legislature is the responsible thing to do.