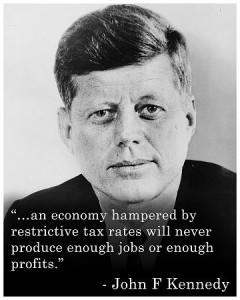 Massachusetts lowered its state income tax in 2001. Given the presumably large number of rich people who pine to pay more taxes, the state allowed tax filers to check a box and voluntarily pay the old, higher rate. In a liberal state of over 3 million tax filers, how many volunteered to pay the higher rate in 2004? A tiny fraction of 1 percent — 930 taxpayers.

John Edwards, former senator and Democratic presidential candidate: His wife, Elizabeth, once called him a person of “character” because Edwards voted against his own economic “interests” by voting for higher taxes. Well, OK, but like billionaire investor Warren Buffett, who urges higher taxes, Edwards is less than keen on paying them. As a lawyer winning major jury awards, John set up a subchapter S corporation to pay himself through dividends — and thus avoid $600K in Medicare payroll taxes.

Kennedy patriarch Joe Kennedy: The late Ted Kennedy and his family shield their money through a series of complicated family trusts first begun by father Joe Kennedy. The trusts transfer wealth from generation to generation while avoiding estate taxes.

The late Ohio Democratic Sen. Howard Metzenbaum: A liberal’s liberal, Metzenbaum enjoyed a lifetime rating from Americans for Democratic Action of 95 (100 being perfect) and a zero from the American Conservative Union. He never met a tax hike he did not like. He moved to Florida when he retired from the Senate. Why Florida? No state estate or personal income taxes.

“Civil rights” leader and MSNB-Hee Haw host Al Sharpton: Though he supports increasing taxes on the rich, Sharpton, it seems, fails to do his part as a member of the 1 percent. As of last year, according to the New York Post, Sharpton owed $3.5 million in state and federal income taxes. His nonprofit, the National Action Network, as of 2011 owes nearly $900K in unpaid federal payroll taxes.

What do these individual instances of hypocrisy say about whether taxes should be increased on the so-called rich?

First, contrary to Buffett’s assertion, people absolutely make decisions and change behavior in response to taxes. Compare the economies of Texas and California, two border states with similar immigrant populations. Texas is a no-income-tax, right-to-work, business-friendly state with substantially less regulation than the Obama-like high-tax (especially on the “the rich” and on business), forced unionism, heavily regulated state of California. Texas also has one of the lowest per-capita spending rates, while California has one of the highest. . . .

Second, because people change behavior in response to taxes, raising them can result in getting less revenue. John Kennedy said, “It is a paradoxical truth that tax rates are too high today and tax revenues are too low — and the soundest way to raise revenues in the long run is to cut rates now.” . . .

The full article first ran at larryelder.com on December 6, 2012. (NOTE: It is reported that Al Gore and his partners were eager to complete a deal selling Current TV by Dec. 31, 2012 to avoid being taxed at higher rates which would take effect on Jan. 1, 2013. )