Freedom Centers Constitutional and Political Freedom Leading From Behind? ... 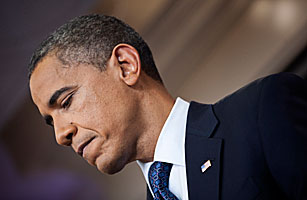 The history of mankind had always been an unending struggle for the refutation of the past and its replacement with a future that had frequently amounted to the mere restoration of the former.  Oscillating between short periods of peace and protracted wars, ephemeral tranquility and ever-present violence, successive generations had mostly lived in various stages of ideological and political hatred and institutionalized fear.

Progressivism, therefore, had always been fraught with two fundamental contradictions.  Because it systematically had negated the existing realities, progressivism had been in eternal danger of embracing senseless causes, while simultaneously striving to conceal the real nature of its true intentions.  As a result, progressivism had rarely aimed at reform and transformation, but at the total annihilation of all opposition.

Today, even democratically elected politicians behave like autocrats, governing with arrogant contempt for the wishes and interests of the opposition in their respective countries.  A case in point is the Obama Presidency in the United States of America.  In absolute confutation of his campaign rhetoric, he has demonstrated throughout his presidency that he has no intention of governing according to the letter and the spirit of his oath, and in the name of the people, and to the benefit of the country, as the elected leader of all Americans.  Like an unelected autocrat, he has exercised absolute power, ignoring all opposition.  Ignominiously, he has been assisted all along by a nefarious media, an unprincipled Republican opposition and by the indifference of the greater part of the nation.  As a consequence, American politics, the economy and culture have been imprisoned within many vicious circles, and efforts to break out of these situations have only led to drawing the circles even tighter.

The same deceptive modus operandi has guided President Obama’s disastrous foreign policy.  Intellectually poorly endowed, devoid of any understanding and experience in international affairs and national security matters, driven by his subjective minority mentality toward everybody who differs from him, Barack Obama has created a vacuum of leadership that has resulted in chaos and anarchy in the world.  Lacking competent advisers and a strong opposition, having no capacity for self-criticism, tormented by his incompetence, he has remained clueless to the challenges and difficulties of his responsibilities.  The price that the United States and the rest of the world has paid for the absence of Obama’s vision is horrendous and will take a long time to undo.  This discombobulated nonsense is called by Obama and his followers progressive foreign policy.

Meanwhile, the world is passing through a very serious crisis.  For this reason alone the election year of 2016 is the moment of truth for the United States of America.  This year will also mark a dividing line for the American foreign policy and the world at large in which, like in the tower of Babel, every country speaks only its own language and refuses to listen to the others’ arguments.  Obama’s rhetoric of hope and change, Putin’s promise of Russia’s restoration to its past glory, Iran’s illusions regarding a world revolution, Europe’s aimless timidity, the Middle East’s dangerous position between the rock of modernization and the hard place of preserving Islam’s purity, China’s quest for a new foreign policy, the African continent’s divisive contradictions and its politicians cluelessness, the Asian countries’ inability to cooperate meaningfully with each other, and the self-defeating grievance politics of Central and South America, have left the world in a state of hopeless chaos.

In order to deal both smartly and humanely with such a critical situation, it is imperative the break the bonds with which blind ambition and destructive megalomania, in their violence and terror, have shackled American foreign policy thinking during the 20th and the beginning of the 21st centuries.  The question is whether the new American President would be able to provide leadership even at the risk of his political future.