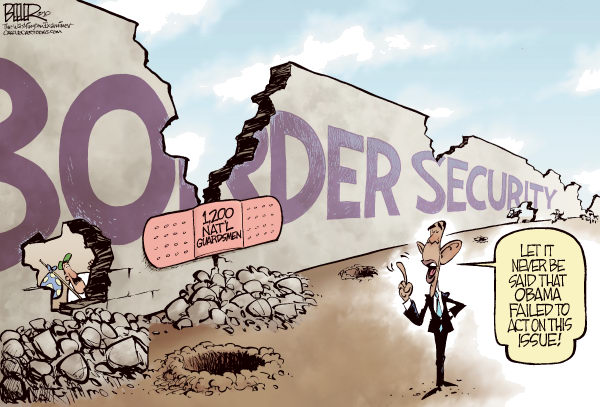 I am more open to some form of amnesty than most people around here, I suspect, though the form I could support (as part of a deal that included more serious border control and visa enforcement) would involve legalization short of full citizenship, for reasons well articulated by Peter Skerry here. But the question of how to address the complicated problem of the status of the more than 10 million people who are in our country without legal authorization is a matter for the political system as a whole to address. That system has made several serious efforts to do so in recent years, so far without success. The most recent such effort (which resulted in a bad bill, in my view) took place while President Obama has been in the White House. He knows that as things now stand in Congress the question is not about to be resolved, and that the 2014 election is not likely to lead to its being resolved in the way he would prefer. Presumably this disappoints him. But the notion that the president can respond to a failure to get Congress to adopt his preferred course on a prominent and divisive public issue by just acting on his own as if a law he desires had been enacted has basically nothing to do with our system of government.

In one sense, the approach the president is said to be contemplating does fit into a pattern of his use of executive power. That pattern involves taking provocative executive actions on sensitive, divisive issues to isolate people he detests, knowing it will invite a sharp response, and then using the response to scare his own base voters into thinking they are under assault when in fact they are on the offensive. That’s how moving to compel nuns to buy contraception and abortive drugs for their employees became “they’re trying to take away your birth control.” This strategy needlessly divides the country and brings out the worst instincts of people on all sides, but it has obvious benefits for the administration and its allies. Liberals get both the substantive action and the political benefit of calling their opponents radicals and getting their supporters worked up. Obama’s legalization of millions would surely draw a response that could then be depicted as evidence of Republican hostility to immigrants, rather than of Republican hostility to illegal executive overreach that tries to make highly significant policy changes outside the bounds of our constitutional order.

But while the legalization now being talked about fits into that pattern in a sense, the sheer scope of its overreach would put it in a different category as a practical matter. That overreach is not mitigated but exacerbated by the fact that the president apparently intends to be selective: We are told he may offer effective legal amnesty to about half of the 11 or so million people who are here illegally. Which half? And why not the other? The president apparently intends to answer these questions based on criteria of his choosing, with no clear foundation in any particular statutory authorization or provision of law.

President Obama has long treated Congress with contempt, and has on many occasions taken executive actions that have bent or broken the limits of the executive’s discretion in our system. Perhaps above all, he has enforced Obamacare selectively — ignoring some clear requirements of law and conjuring up others that do not exist. These have been serious violations of his obligation to see that the laws are faithfully executed, and have caused serious problems for our system of government. They will leave the next president with a lot of damage to undo. But what the administration appears to be contemplating here is of a different scale and character. It is not selective enforcement of a new statute but rather just an action outside the law, in an arena in which the president himself has said unilateral action is beyond his authority and in which there is no case for extreme urgency.

White House officials clearly understand that such a move would invite a firestorm of opposition and criticism, and they appear to see that as an advantage. Maybe they’re right that such a step and its aftermath would work to their political benefit, and maybe they’re not. But surely it would all harm the country — dividing the public and debasing our system of government. It seems like just the sort of thing that a national leader would seek to avoid, rather than work to invite. Let’s hope the reports aren’t true.

Yuval Levin is a contributing editor to National Review.