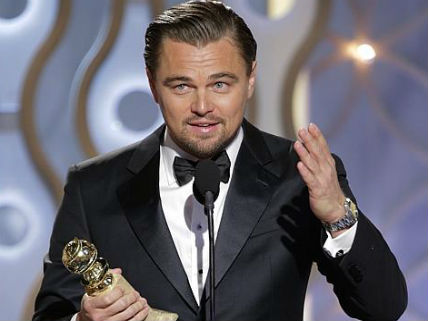 Actor Leonardo DiCaprio won the Oscar for best actor for his role in the snow hell movie, The Revenant. A long-time and vocal environmental activist, DiCaprio took the opportunity to spotlight his concern over man-made global warming in his acceptance speech. His foundation has committed to spending $15 million on environmental causes including on climate change activism. Citing surface temperature data, DiCaprio declared that humanity had “collectively felt in 2015 as the hottest year in recorded history.” On the other hand, satellite temperature data from climatologists at the University of Alabama in Huntsville suggest that 2015 was third warmest year since 1979 when satellite measurements began. The past year was particularly warm because of a large El Nino in the Pacific Ocean in which a massive amount of warm water sloshes toward South America from Asia. The phenomenon warms the atmosphere, but now appears to be fading which suggests that 2016 will be cooler than last year.

DiCaprio further asserted that climate change “is the most urgent threat facing our entire species, and we need to work collectively together and stop procrastinating.” DiCaprio is right that global average temperatures have been rising in recent years, but, as an article in Nature Climate Change just last week acknowledged, temperature has been rising much less rapidly than projected by most computer climate models. If this lower rate were sustained, it would substantially undercut claims that the world faces an urgent and impending climate catastrophe.

DiCaprio also stated, “Our production needed to move to the southern tip of this planet just to be able to find snow.” Apparently the original plan was to shot the entire movie in Canada, but a persistent high pressure ridge over the Pacific Coast of North America produced an unseasonably warm winter in the Western U.S. and Canada. On the other hand, the Eastern U.S. and Canada suffered through a “polar vortex” winter with plenty of snow. Perhaps the producers should have moved the filming from British Columbia and Alberta to Quebec and upstate New York.

In any case, the producers used southern Argentina as a snowy location. Originally the filming was reportedly supposed to wrap by March, 2015, but did not finish up until August, 2015 when it just so happens to be winter in Argentina and summer in Canada. Citing warmer than average temperatures in western North America for one specfic year as dispositive evidence for global warming makes as much sense as citing colder than average temperatures in eastern North America in the same year as evidence for global cooling.

DiCaprio expressed his concern for how climate change will deleteriously affect “indigenous people of the world, for the billions and billions of underprivileged people.” First, the good news is that the World Bank reports that absolute poverty (defined as living on less than $1.90 per day) has now fallen below 10 percent of the world’s population. The global rate of absolute poverty was 37 percent as recently as 1990. In large measure this amazing improvement in poverty rates stems from hundreds of millions of poor people gaining access to modern energy supplies. Total electric generating capacity has more than doubled since 1990 and most of that energy is produced by burning fossil fuels. DiCaprio would be better advised to direct his aid toward connecting the 1.2 billion underprivileged people who are still without electricity to modern power plants.