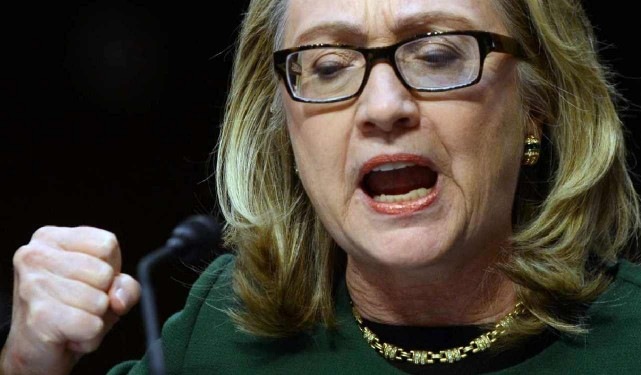 By Joey Wulfsohn • The Federalist

Hillary Clinton has gone global with her self-pity party.

At a speaking event in India, the failed presidential candidate extended her list as to why she lost the election and while doing so attacked all 63 million Trump voters.

Clinton began by explaining how on the electoral map, Donald Trump won “all that red in the middle” while she won the coasts and states like Illinois and Minnesota. But then she goes on to explain how she won in places that “represent two-thirds of America’s gross domestic product” and that are “optimistic” and “diverse.” In other words, urban cities.

She then said the following: “His whole campaign: ‘Make America Great Again’ was looking backwards. ‘You didn’t like black people getting rights? You don’t like women, you know, getting jobs? You don’t want to, you know, see that Indian American succeeding more than you are? Whatever your problem is, I’m going to solve it.’”

Let’s unpack all of that.

First, she blatantly disregarded Middle America simply because they didn’t vote for her and chastised them for apparently not contributing enough wealth in comparison to cities like New York and Los Angeles. Then she began smearing Trump supporters, many of whom voted for President Obama, particularly in the swing states, by assuming they’re a bunch of racists and misogynists. She was essentially calling them “deplorables” all over again.

And if that wasn’t bad enough, she also went after the 52 percent of white women that voted for Trump.

When asked by the moderator how she lost such a demographic, Clinton began by pointing out the voting trend that the Democratic Party continues to lose white voters and, in particular, doesn’t do well with white men and married white women.

“And part of that is an identification with the Republican Party,” she said, “and an ongoing pressure to vote the way your husband, your boss, your son, whoever, believes you should.”

She went on to claim that she was on her way to winning white women until then-FBI Director James Comey reopened the email investigation just days before the election and her polling “plummeted.”

Such rhetoric was shared by former First Lady Michelle Obama when she said that any woman who voted against Clinton “voted against their own voice.” Imagine being woman who voted for Trump and being told by the first woman to win the nomination of a major political party AND by the former First Lady that you are incapable of thinking for yourself. Such shaming is the antithesis of being a feminist, something Clinton claims to be.

Trump went after a lot of people as a candidate and continues to do so as president from journalists, celebrities, Democrats, to members of his own party and cabinet. However, he never viciously attacked the millions of voters who supported Clinton the way she constantly does to his voters. Clinton continues to show disdain for average Americans who don’t think like she does and frankly, that’s a major problem for Democrats.

It has now been over 16 months since the 2016 election and despite some gains they have made in special elections, the Democratic Party is still struggling to grapple with why they lost so much control in every level of government over the years. Right now, they’re solely relying on the “resistance” movement, which to some extent is effective. Is it enough to win back the House in 2018 or the presidency in 2020? Absolutely not.

Just as Trump won over blue-collar Democrats in states like Wisconsin, Michigan, and Pennsylvania, Democrats must win them back in order to win elections and that will require a message that resonates with them and a messenger that they can trust. Obviously, both Hillary Clinton and her party failed to do so during her campaign, but instead of reflecting on her own shortcomings, Clinton blames everything and everyone for her defeat. Even Al Gore, John Kerry, John McCain, and Mitt Romney have shown more grace than this sore loser. It’s no wonder why her favorability numbers continue to hit new lows following the election.

While the general consensus is that the Clintons represent the past of the Democratic Party and not its future, her never-ending complaining about the 2016 election will only remind Americans how awful of a candidate she was, which will only drag down Democrats, since they’re in the midst of an identity crisis as they seek new leadership. If they want another shot at glory, they ought to urge Clinton to stop talking about her humiliating defeat, and, more importantly, stop smearing the people they need to vote for them in future elections.