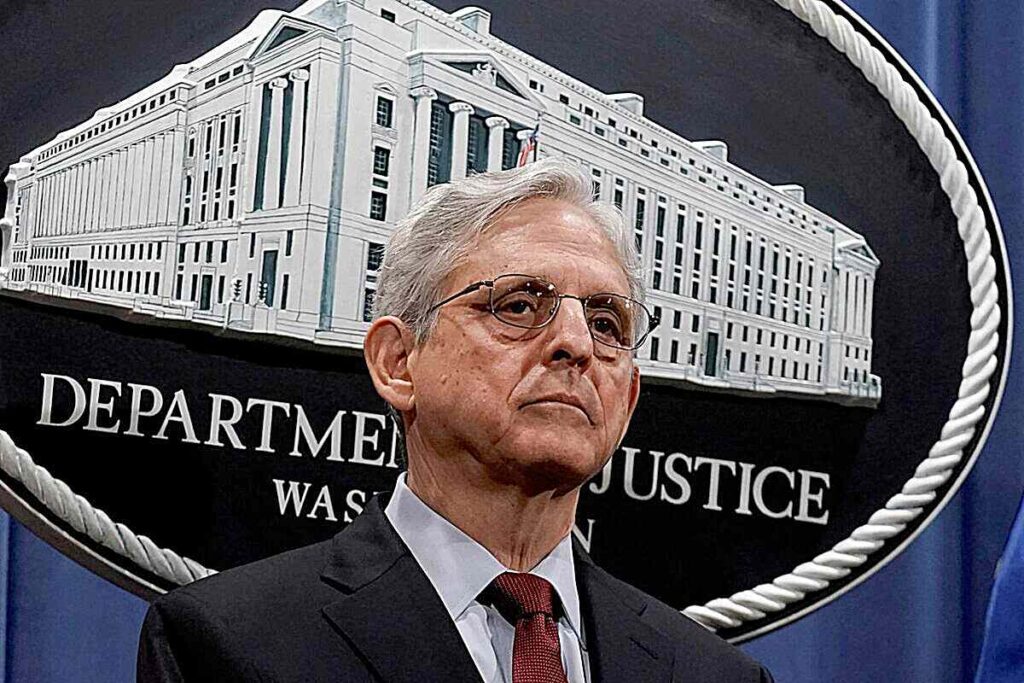 On March 16, 2016, former President Barack Obama nominated Merrick Garland – then the Chief Judge of the United States Court of Appeals for the District of Columbia Circuit – for Associate Justice of the Supreme Court of the United States of America to succeed Antonin Scalia.  The President and his Democrat allies in the Senate pitched him as an old-fashioned moderate lawyer who also won approval and praise from senior Republican figures.  The Merrick Garland nomination failed spectacularly in the Senate.  Five years later, President Biden nominated Merrick Garland to the post of Attorney General.  In announcing his nomination, President Biden called him “a consensus building voice.”  This time he was confirmed by a vote of 70-30 and sworn in on March 11, 2021.

Proving that not all gold that sparkles, Attorney General Merrick Garland has proven himself to be another political hack in the garb of a seemingly impartial arbiter of legal disputes on the top of the nation’s constitutional pyramid.  Recently, penning a memo to the FBI and state attorneys general, Merrick Garland opined thus:  “While spirited debate about policy matters is protected under our Constitution, that protection does not extend to threats of violence or efforts to intimidate individuals based on their views.”  Almost certainly, his memo was triggered by the National School Boards Association October 1st letter, in which they asked the Justice and Homeland Security Departments – as well as the FBI – to investigate “a form of domestic terrorism” directed against school board members, staff and students.  To wit, parents’ objections to Marxist-Leninist-Stalinist indoctrination, instead of teaching and educating their children, will warrant political persecution by Merrick Garland’s DOJ as the new political wing of the Democrat Party.

This newest anti-American idiocy by the “moderate” Merrick Garland brings to mind the myth of Pavel/Pavlik Morozov from the early 1930s in Stalin’s “Workers’ Paradise.”  The “heroic deed” of this thirteen-year-old Siberian boy was that he accused his father, the head of the local governing council or Soviet, to falsify safe conduct passes for formerly rich but by then dispossessed peasants, called Kulaks.  His father was taken away and summarily shot.  Some months later, Pavel/Pavlik and his younger brother Fedya were found murdered in the nearby forest.  The OGPU, the forerunner of the KGB, arrested all of the boys’ relatives, charging them with murder and opposition to Stalin’s plan to form collective farms across the Soviet Union.  Their crime of allegedly killing the boys was compounded by Article 58, Section 8 of the Soviet Criminal Code, which defined any opposition to Stalin as domestic terrorism against the state.

In addition to not a single fact turned out to be true, Stalin used this invented story to peddle a new hysteria of domestic terrorism against him and the Communist Party of the Soviet Union.  For starters, all of Pavel/Pavlik’s relatives were also shot.  After all the relatives were exterminated, the myth about the child-saint and child-martyr to the Communist cause was made an object of almost religious adulation.  His “heroism,” namely, informing falsely on his father was (mis)used to create a morbid Communist cult about loyalty to the state as opposed to loyalty to one’s family.  “Be like Pavlik, children were told from the moment they took the oath as pioneers,” the newspaper Tribuna exhorted the young Communists on the anniversary of his death.  Moreover, “Study hard, love your motherland, expose the enemies of Soviet power, and be merciless with traitors.”  Almost half-a-century later, when the Soviet Union ceased to exist, Pavel/Pavlik’s father and all of his relatives were officially “rehabilitated.”

Parents are rightfully angry.  At least, since the death of the hard criminal George Floyd who graduated to false sainthood, they are convinced that schools can get nothing into perspective.  To add ill-educated insult to the burgeoning and seemingly unbreakable tyranny of an aggressive as well as arrogant  minority educators, they feel being stuck between some teachers’ hatred of everything American and the overwhelming rage of Democrat politicians that make their job as parents increasingly impossible.  In this tragically miserable situation, the entire Biden administration in general and Merrick Garland’s DOJ in particular, have become a morbidly hollow, moot dummies, the satirized form of a bunch of little Stalins.  And as the original Joseb Besarionis Dzhugashvili who throughout his life wore the mask of Stalin, Merrick Garland put the mask of a ruler on his face that transforms him from an educated lawyer to a bureaucratic despot.  Meanwhile, Americans over whom he pretends to rule slowly but surely begin to hate him.  In the end, like Stalin’s Soviet Union, political hacks like President Biden, members of his administration, including Merrick Garland, will deservedly disappear without too much notice inside the huge pile of history’s garbage dump.