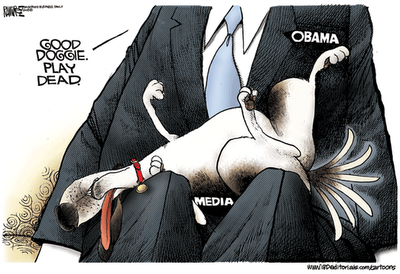 The mainstream media is treating the ongoing Middle East turmoil as an unfortunate distraction from the “real story” that they would like to shove down the public’s throat – that Mitt Romney is incompetent. The media’s tortured narrative ignores the facts and relies upon double standards so offensive that even the truly dull-witted and see the fallacy.

Reporters are incensed that Romney would “politicize” a matter of national security. However, that is a shockingly dishonest narrative because these same reporters filed zero news stories in 2008 criticising then-candidate Barack Obama when he regularly and opportunistically used every death or bit of bad news out of Iraq as an excuse to promote himself and attack Hillary, Bush and McCain who were more supportive of the Iraq war than Obama. If you believe Romney should remain silent now, than you must also believe that Obama should have remained silent in 2008. Yet, Obama was far more vocal in his criticisms in 2008 than Romney has been in 2012. Thus, the mainstream media again (as it does almost daily) reveals itself to be thoroughly dishonest, deceitful and morally blind.

The media’s entire narrative is bizarre given that Mitt Romney’s criticism of the State Department’s only communication for about 10 hours about the violence in Cairo is now the official position of the Obama Administration. Team Obama has completely disavowed the offending State Department posts and explicitly stated that those posts do not reflect Obama’s views or America’s policy. But they did that hours after Romney pointed out it made no sense for the U.S. Government’s only statement on the violence to be a condemnation of some stupid video on YouTube.

For the record, the White House has spent far more time telling the world of its condemnation for the homemade movie and how awful they think Romney is, than they have condemning the murder of our diplomats or the attack of our embassies. Now that would be a real news story.

Notwithstanding that Obama has vindicated Romney and his statement, the media acts like the real story is that Romney can’t be trusted to protect America. These soft-headed media schleps live in the world of bizarro. In their world, apples don’t fall from trees, they float away into space – grass isn’t green, it’s pink – and skies aren’t blue, they’re lime green. It should surprise no one that the public’s trust of the media is at an all time low.

Even a well-known and card-carrying liberal and Democrat — Kirsten Powers — has expressed complete shock and disgust that the mainstream media continues to tell a false narrative and ignore the real story.

Jonah Goldberg has a great blog post on this topic at National Review Online. Here are some excerpts:

The establishment-press position is that Mitt Romney outrageously jumped the gun in his condemnation of the Obama administration’s response to the attacks on our embassies (even though the administration soon moved to exactly Romney’s position, condemning the U.S. embassy’s response)….

I understand and can respect the opposing point of view, by the way. I don’t think it’s ridiculous to argue that Romney jumped the gun. I do think, however, the obsession with the issue is beyond ridiculous. It should have been a minor sidebar question, taking up a few minutes on Sunday shows. Instead, we’ve gotten to the point where the MSM seems to be treating the ongoing turmoil in the Middle East and the metastasizing attacks on our embassies as an unfortunate distraction from the “real story” of Romney’s incompetence. Indeed, much of the political press seems to have decided that their job is to explain why Romney shouldn’t be president. In an effort to master self-parody, Chris Matthews now believes it was “arrogant” for Romney to even run against Obama in the first place.