Freedom Centers Constitutional and Political Freedom Messaging is not the problem ...

Messaging is not the problem 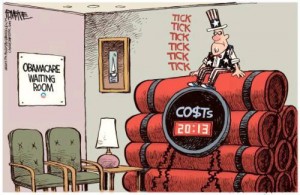 “Healthcare.gov No Longer a Complete Fail” was the headline on the story in Time magazine Dec. 2 on the rollout of the “new, improved” version of the Obamacare website.

It’s hard to find a better illustration of the expression: “to damn with faint praise.”

In November, Healthcare.gov was “up” just 42.9 percent of the time. According to the web monitoring firm Panopta, the lowest uptime rate last year for the websites of 130 major retailers was 99.34 percent.

Healthcare.gov still crashes so often that the low bar the administration has set for “success” — that 80 percent of visitors could complete the enrollment process — may not have been met.

Apparently, the site can handle no more than 17,000 visitors at a time — not the 50,000 the administration claimed. People should try to gain access during “off peak” hours, officials recommend.

“Would you consider an ATM machine to be functional if it created a lifelike experience but no money comes out, no deposits get credited, no transfers actually work?” asked Jonah Goldberg of National Review.

People who access Healthcare.gov can have a “satisfying user experience.” But for many, nothing happens after they fill out the forms because the “back end” — the portion of the site that communicates with insurance companies, processes payments and actually enrolls people — hasn’t been fixed.

To hide from Catherine the Great the squalor that actually existed in the Crimea, Gregory Potemkin allegedly erected pasteboard “villages” along the banks of the Dnieper.

The Obama administration “has erected a Potemkin village online — a facade that temporarily conceals the lack of architecture behind it,” said Washington Post blogger Jennifer Rubin.

“The website provides the illusion of a working health care exchange, but while it takes your information, there’s no telling what it will do with it (e.g. lose it, send duplicates, garble it),” she said.

Those who fill out forms that go nowhere may suffer more than a waste of time. There are so many security flaws in Healthcare.gov’s 500 million lines of code it’s a “mother lode for identity theft,” four experts told a House committee Nov. 19. It would take about six months just to assess all the risks, they estimated.

Rushed “fixes” have made security worse, said David Kennedy, former cyber intelligence analyst for the Marine Corps. The most popular searches on the website have been hack attempts, he noted.

State health care exchanges — but not the federal government’s — are required to notify the victim if there’s a security breach. This matters, Mr. Kennedy said, because the administration has been trying harder to conceal security problems than to fix them.

The president began this week a campaign to encourage Americans to sign up for Obamacare.

Most of Healthcare.gov’s troubles can be attributed to galactic incompetence. But to cajole Americans to disclose their personal information when administration officials know how grave is the risk of identity theft is “not average political dishonesty,” said Bryan Preston of PJ Media. “This is evil.”

Reality soon will overtake the current set of what The New York Times chooses to call Mr. Obama’s “incorrect promises.”

“Up to one-third of users who believe they have applied for private insurance will discover in January that they have not,” predicted Noah Rothman of Mediaite, citing a Washington Post story Dec. 2.

But for the president and his aides, “the crisis these errors will create in January is January’s problem,” Mr. Rothman said. They think only of damage limitation today. Like Scarlett O’Hara, they’ll think about tomorrow tomorrow.

Perhaps Mr. Obama imagines he can talk his way out of anything. But his isn’t a “messaging” problem. Obamacare has done too much harm to too many people for reality to be spun or ignored.

Exposure of his earlier lies about Obamacare has taken a terrible toll on the president’s credibility. Young people used to be his strongest supporters. In a Harvard Institute of Politics poll released last week, a majority of 18- to 24-year-olds said he should be recalled from office. More lies will seal his doom, not save him from it.

Jack Kelly is a columnist for the Pittsburgh Post-Gazette.