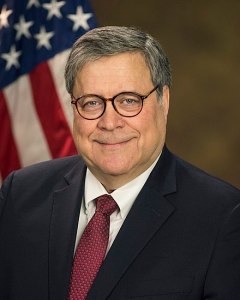 Below is my column in the Hill newspaper on the allegations that Attorney General Bill Barr is now somehow “implicated” in the Ukraine controversy because he spoke with counterparts in England, Italy, and Australia about assisting in the investigation by U.S. Attorney John Durham. If those calls were truly about the Durham investigation, it would be entirely proper for Barr to ask for such assistance. I have always maintained that the Congress has a legitimate interest in investigating the Ukraine controversy. However, the chorus of recriminations on the Barr matter reveal the hype triggering much of the hypoxia.

Here is the column:

With all of the breathless headlines of the last two weeks, it is astonishing that the entire city of Washington is not swooning from hypoxia. Much of the media have blasted out the news that Attorney General William Barr is “implicated” in the Ukraine scandal, after sources said he pressed leaders in Australia, Italy and England to supply evidence about the origins of the Russia investigation. Esquire Magazine was a tad more descriptive, proclaiming Barr was now “far up s–t creek” because of his calls.

Yet not only is there a valid reason for such calls, but they could indicate that the creek could become a storm of sorts for Democrats over the coming weeks. The calls made by Barr were reportedly linked to the ongoing investigation by United States Attorney John Durham into the origins of the Russia investigation. It is not uncommon for an attorney general, or even a president, to ask foreign leaders to assist with ongoing investigations. Such calls can shortcut bureaucratic red tape, particularly if the evidence is held, as in this case, by national security or justice officials. A call to request assistance for the Durham investigation would “implicate” Barr in nothing other than an official investigation.

I supported the appointment of a special counsel after President Trump fired FBI Director James Comey. I also supported an investigation into the origins of the FBI investigation. The country is divided on the merits of both with legitimate concerns raised on each side. With the start of a House impeachment inquiry, it is more important than ever to have transparency along with a review of both investigations.

Moreover, Durham could answer some disturbing aspects of the origins of the Russia investigation, including the mysterious role of Professor Joseph Mifsud. Efforts by Durham to gain cooperation from Australia, England, and Italy likely concern figures such as Misfud. The professor seemed eager and focused in revealing that there were “thousands of emails” in the hands of the Russians in conspicuously opportunistic meetings with key figures.

An academic from Malta, Mifsud has long been tied to Russian interests and appears at critical moments throughout the Russia investigation. He met with former Trump campaign aide George Papadopoulos in both Rome and London. In one of those meetings, he referenced the existence of hacked emails.

We have never established the real facts or loyalties of Mifsud. Some have suggested that he may have been a Western asset working for American, British, or Italian intelligence services. Fueling that speculation was the fact that the special counsel report indicates Mifsud lied repeatedly to investigators on sensitive national security issues. While Robert Mueller charged others for minor discrepancies in the stories that they told investigators, Mifsud somehow escaped any such charge.

Information on Mifsud would be found in countries like Australia, England, and Italy, as would be information on the work of former British spy Christopher Steele. The Clinton campaign paid him and an American opposition research firm a large sum of money to seek dirt on Trump, including Russian and other foreign sources. Such information is not easily shaken loose without a high level prompt from someone like Barr.

However, many of the very same figures in Congress and in the media who previously called for full disclosure of every aspect of the Russia investigation are now criticizing the effort to gather evidence in the Durham investigation. It appears the public “right to know” does not extend that far. The reason is that a key report by Durham likely would come at a most importune time in advance of the 2020 election.

Democrats already are moving to impeach Trump on the Ukraine matter. House Speaker Nancy Pelosi and others have told fellow Democrats to focus on Ukraine instead of on Russia conspiracy or obstruction, which led to more than two years of investigation. One reason for this is that Trump would be able to call his own witnesses during a Senate trial, particularly with a Republican majority dictating the rules. If the Russia investigation winds up as part of an impeachment trial, then Trump would be able to use these reports and earlier disclosures to place the conduct of the Obama administration under the spotlight before the public.

Trump would have plenty to work with in such a trial. The original focus was on his campaign aide Carter Page, who ultimately was not indicted on any crime. Mueller could not find a single crime by George Papadopoulos other than a marginal false statement that led to a whole 12 days in jail. Mueller ultimately found that no Trump official knowingly dealt with Russian hackers or trolls. If Durham finds irregularities and improper conduct in the Russia investigation, it will reinforce the claim by Trump that his campaign was improperly targeted by hostile FBI officials.

Even worse is there could be a one two punch coming on the Russia investigation. Justice Department Inspector General Michael Horowitz is said to be close to releasing his report on the secret surveillance targeting Trump officials. The report is expected to be both comprehensive and damaging for many involved in the start of that investigation. Durham and Horowitz will not be easily dismissed. Both are widely respected and are working with career investigators. If either finds improper conduct, it could reinforce the position of Republicans and moderate Democrats in voting against the impeachment or removal of Trump, who strongly maintains that the Obama administration not only improperly targeted his campaign for investigation but proved lax in investigating allegations against Democrats ranging from Hillary Clinton to Joe Biden.

Convicting a president in an impeachment trial requires evidence and clarity. Even if Democrats only proceed on the Ukraine call, Trump will be able to claim that he sought evidence tied to the Russia investigation to assist Horowitz and Durham in their own investigations. He will be able to call witnesses like Hunter Biden on his business dealings in Ukraine while his father handed out more than a billion dollars in aid.

It is doubtful that Democrats could resist references to the Russia investigation in an impeachment trial, which would trip the wire for Trump to bring in countervailing evidence from the Horowitz or Durham reports. Esquire Magazine could right about the nature of this river, but while it may lead to many things, clarity is not likely one of them.