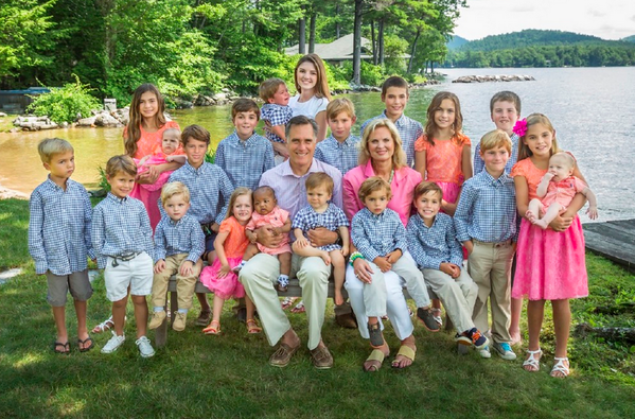 Sarah Palin slammed the ‘lamestream media’ for an MSNBC segment on Melissa Harris-Perry’s show mocking Mitt Romney’s adopted black grandson. Thereafter, the host apologized for causing offense. This marks the second time the cable network has been criticized for a bizarre personal attack against a Republican personality.

The Romney family Christmas card was among the items featured in the “Nerdland plays Caption That!” segment on the cable news show Sunday.

In the photo, the former Republican presidential candidate and his wife Ann, who are both white, sit in the center of their 22 grandchildren. Nestled on Mitt’s knee is one toddler grandson and on his other knee he holds baby Kieran James, the adopted infant son of Mitt’s son, Ben, and his wife, Andelyne. His adoption was announced in September.

The Romneys, who are devout Mormons, have regularly showcased their five adult sons and their ever-growing brood.

“That little baby, front and center, would be the one,” said Glenn, who was among the four panel members who joined Harris-Perry for the segment.

Daily Beast’s Dean Obeidallah, also on the panel, chimed in that he thought the photo was “great.”

“It really sums up the diversity of the Republican Party and the RNC, where they have the whole convention and they find the one black person.”

The host called the baby “gorgeous” and revealed her pipe dream for 2040 would be the wedding between Kieran Romney and North West, the infant daughter of rapper Kanye West and celebutante Kim Kardashian.

“Could you imagine Kanye West and Mitt Romney as in-laws?” she said.

And Romney wasn’t the only conservative to be scoffed at during the show.

Panelist and comedian Judy Gold commented on Texas Sen. Ted Cruz, expressing her dismay that the Republican was the father of two daughters, Catherine and Caroline, in another segment on the Sunday show “2013: The year in political ridiculousness.”

“Men like this … they have daughters. That disturbs me,” she said, chiding Cruz and conservative Republicans for being anti-women.

Calling the segment “holy (sic) unbelievable,” Palin praised Romney for “embracing the spirit of adoption” with the addition of their new family member. Slamming the “lamestream media” for the prejudice, Palin said, “This latest attack from the Left is despicable,” in a Facebook posting to her 3.9 million followers.

Palin published her reproach early Tuesday morning and hours later, Harris-Perry tweeted to “apologize to the Romney family for hurting them.”

“I am sorry. Without reservation or qualification,” she tweeted.

At noon Tuesday, the news host posted an official apology to her show’s website.

“On Sunday’s program, we showed a photo of Governor Romney holding his adopted grandson, who is African-American. The intent of featuring the photo was to celebrate it— I often speak to the issue of the increasingly diverse American family.

“Whatever the intent, the segment proceeded in an unexpected way that was offensive. Without reservation or qualification, I apologize to the Romney family and to all families built on loving transracial adoptions,” the statement said.

Obeidallah also published a blog posting to commend the Romney family for the adoption and apologize for his remark.

Sunday’s episode is just the latest incident on the cable network to upset Palin.

The former Alaska governor was the subject of a crude attack by former host Martin Bashir, who suggested on his show in November that someone defecate in the Republican’s mouth as punishment for her comparison of the U.S. deficit to China to the chains of slavery.

Bashir later apologized for the “ill-judged comments” and resigned from the network in December.

Network president Phil Griffin only said that he accepted Bashir’s resignation and wished him the best.