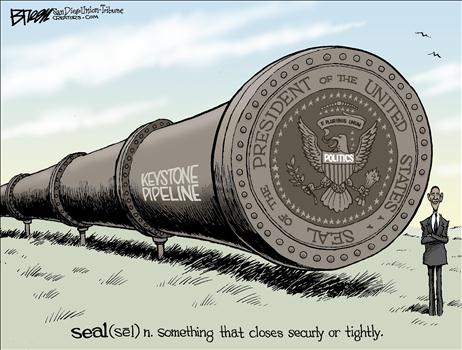 But politics are indeed driving the president’s Keystone inaction, thanks largely to climate change and environmental alarmists. How else to explain the more than five-year wait for approval of the Keystone pipeline, a project that requires no tax money, is shovel ready and loaded with good-paying jobs? The State Department’s Final Supplemental Environmental Impact Statement, released Jan. 31, concludes: “During construction, proposed Project spending would support approximately 42,100 jobs (direct, indirect, and induced), and approximately $2 billion in earnings throughout the United States.”

Most importantly, the report says construction would have little if any impact on climate change. (Note the immensely arrogant underlying assumption that mankind is responsible for all extreme weather events and can reduce the frequency and impact of those events by crippling the continent’s oil and natural gas revolution, which is driving the supposed economic “recovery” the president takes credit for.) A State Department official said “approval or denial of any single project is unlikely to significantly affect the rate of extraction of the oil in the oil sands, or the refining of heavy crude on the U.S. gulf coast.”

Translation: That oil is coming out of the ground, whether President Obama and the environmental lobby like it or not. If it isn’t transported via the Keystone XL pipeline, it will be shipped by rail or truck, which produce more carbon emissions than a pipeline and are far less safe, creating a greater risk of accident-caused oil spills.

Of course, Canada could always tell the United States to pound oil sands. A pipeline to the western Canadian coast would allow the sale of all that oil to China, a country that builds an average of 1.3 coal-fired power plants every week.

Make no mistake, this is all about politics, Mr. McDonough’s statement notwithstanding. If the president delays the project’s approval any longer, it will serve as notice to unemployed Americans and the Canadian government that they will have to wait for a new U.S. president to move the pipeline forward.

If President Obama won’t approve Keystone XL now, he never intended to authorize it in the first place.