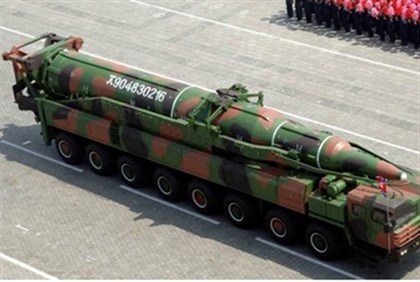 US intelligence officials revealed that during the ongoing Iran nuclear negotiations, North Korea has provided several shipments of advanced missile components to the Islamic regime in violation of UN sanctions – and the US hid the violations from the UN.

The officials, who spoke to the Washington Free Beacon on Wednesday on condition of anonymity, said more than two shipments of missile parts since last September have been monitored by the US going from North Korea to Iran.

One official detailed that the components included large diameter engines, which could be used to build a long-range missile system, potentially capable of bearing a nuclear warhead.

The information is particularly damaging given that Admiral Bill Gortney, Commander of North American Aerospace Defense Command (NORAD) and US Northern Command (USNORTHCOM), admitted this month that the Pentagon fears that North Korea and possibly Iran can target the US with a nuclear EMP strike.

Critics have pointed out that the nuclear framework deal reached with Iran earlier this month completely avoids this question of Iran’s intercontinental ballistic missile (ICBM) program, which would allow it to conduct nuclear strikes.

US President Barack Obama was given details of the shipments in his daily intelligence briefings, but the officials say the information was hidden from the UN by the White House so that it would not take action on the sanctions violations.

The US officials said the recent transfers fall within the scope of the sanctions.

In confirmation, a spokesperson for Spain’s mission to the UN, now in charge of the UN’s sanctions committee, said the committee has not been told about the incidents by the US since Spain took over in January.

White House and State Department spokespersons contacted by the paper refused to comment on the report.

A wave of experts came out with criticism against Obama’s administration for hiding the missile part transfer from the UN.

Former UN Ambassador John Bolton said the shipments violate UN sanctions on Iran, as well as those imposed on North Korea back in 2009.

“If the violation was suppressed within the U.S. government, it would be only too typical of decades of practice,” Bolton said. “Sadly, it would also foreshadow how hard it would be to get honest reports made public once Iran starts violating any deal.”

Former CIA analyst Fred Fleitz shared his assessment, saying “while it may seem outrageous that the Obama administration would look the other way on missile shipments from North Korea to Iran during the Iran nuclear talks, it doesn’t surprise me at all.”

“Iran’s ballistic missile program has been deliberately left out of the talks even though these missiles are being developed as nuclear weapon delivery systems,” noted Fleitz. “Since the administration has overlooked this long list of belligerent and illegal Iranian behavior during the Iran talks, it’s no surprise it ignored missile shipments to Iran from North Korea.”

The mounting criticism was added to by Thomas Moore, a former Senate Foreign Relations Committee arms control specialist, who told Washington Free Beacon that the transfer “certainly points out the glaring omission present in the Iran deal: the total lack of anything on its missile threat.”

“If true, allowing proliferation with no response other than to lead from behind or reward it, let alone bury information about it, is to defeat the object and purpose of the global nonproliferation regime – the only regime Obama may end up changing in favor of those in Tehran, Havana and Pyongyang,” Moore said.

And Henry Sokolski, head of the Nonproliferation Policy Education Center, said the missile transfer “more than suggests why the administration had to back away from securing any ballistic missile limits in its negotiations” with Iran.

The Washington Free Beacon went into detail about the relationship between North Korea and Iran in building the latter’s advanced missile program, which is poised to construct ICBMs capable of delivering a strike with a nuclear warhead at astounding distances.

A classified State Department cable from October 2009 that was exposed by Wikileaks details that Iran is the leading missile customer of North Korean.

It stated how since the 1980s North Korea has been handing Scud missiles and technology for developing Nodong missiles with a 620-mile range to Iran.

“Pyongyang’s assistance to Iran’s [space launch vehicle] program suggests that North Korea and Iran may also be cooperating on the development of long-range ballistic missiles,” read the cable.

Another cable from September 2009 posited that the steering engines in Iran’s Safir rocket likely come from North Korea, and are based on Soviet-era SS-N-6 submarine launched ballistic missiles.

The assessments of the classified cables were confirmed by Joseph DeTrani, former director of the US intelligence agency National Counterproliferation Center, who said North Korea has kept “close and long term” relations with Iran in transferring missiles and related technology.