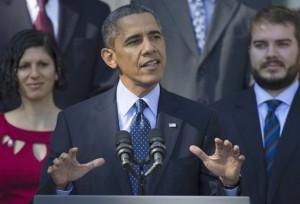 A great debate is underway regarding the nuclear agreement with Iran — and the Obama administration is losing. Unhappy with the growing opposition to his legacy deal, President Obama is trying to stifle the debate by attacking the personal motives and public-communication methods of those who oppose the pact.

He recently derided some prominent opponents as “the same columnists and former administration officials that were responsible for us getting into the Iraq war.” Those comments followed last month’s characterization of deal critics as “talking heads and pundits, and folks who are not going to be making sacrifices, if in fact you end up in a conflict, who are reprising the same positions we saw during the Iraq war.”

Obama has also decried the millions spent by organizations in opposition, saying they have been “putting the squeeze” on members of Congress with TV ads and lobbying campaigns. These groups, he claims, are backed primarily by “billionaires who happily finance super PACs” and are “opposed to any deal with Iran.” In a July 18 address, he seemed particularly hostile to the influence of AIPAC; speaking a day after the pro-Israel lobbying group came out against the deal, he urged Congress to evaluate the agreement “based on facts . . . not based on lobbying.”

Yes, groups such as AIPAC and Nuclear Free Iran have spent large sums pressing their position, but so too have organizations who favor the deal. Take J Street, which in its own words serves as a “blocking back” for the president. Although it claims to be a pro-Israel lobby, J Street has spent five million dollars to convince members of Congress to vote against the consensus view of Israeli leaders, right, left, and center. A number of other far-left groups have also launched a massive lobbying initiative to similar effect in the “StopWarWithIran” initiative.

President Obama has also called on foreign leaders to lobby Congress in favor of the deal; British Prime Minister David Cameron admitted to calling several members of Congress in January, at the administration’s behest, to express his view that further sanctions against Iran would be counterproductive to negotiations.

View Story
Sidney Topol: Listen to the experts and support the deal
The arguments against the agreement are a medley of misrepresentations, half-truths, and fantasy.
George J. Mitchell: Congress should approve agreement

President Obama’s characterization of opponents of the deal as a collection of billionaires and war-hungry neocons is misleading, incomplete, and unfair. The reason so many members of Congress have come out against the agreement is their growing sense that it’s a bad deal. The public agrees; polling has repeatedly shown that Americans oppose the pact and believe that it will “make the world less safe.” As a liberal who opposed the Iraq war, I share those doubts.

Rather than preventing Iran from obtaining nuclear weapons, as the president repeatedly assured us he would do, it may merely postpone and legitimize this catastrophic outcome. Nor does it provide the transparency or immediacy of inspections such a deal should have.

In a worst-case scenario, international inspectors would need 24 days to gain access to a suspected site. The administration should also release the content of side agreements between IAEA inspectors and the Iranian government regarding the conduct of inspections.

Instead of disparaging opponents of the deal, the Obama administration should stand by its own promise to encourage a substantive discussion on this vital issue. With that in mind, I propose a series of TV and radio debates between supporters and opponents of the agreement.

In that spirit, I myself will gladly debate any responsible administration defenders on the deal’s merits and demerits. The American public has the right hear all sides of this issue. The president’s bully pulpit shouldn’t be used to bully Americans who oppose the deal into silence.

Alan M. Dershowitz, a professor emeritus at Harvard Law School, is the author of “The Case Against the Iran Deal.”