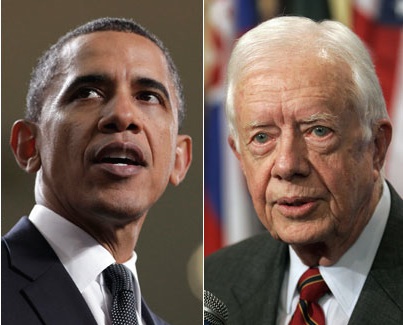 For decades, Carter’s presidency was synonymous with weakness on the world stage. The late 1970’s was the era of double-digit inflation, a worldwide oil crisis, Iranian hostages and Soviet military advances from Latin America to Afghanistan. So pathetic was America’s predicament at the time that the late Massachusetts Sen. Ted Kennedy mounted a primary challenge to Carter from the left.

Obama’s rise to power mirrored his Democratic predecessor’s in many ways. Both men came to office in the wake of widespread public disenchantment with the political establishment, and promoted themselves as outsiders and breaths of fresh air. Both men spoke of surmounting what they portrayed as Americans’ exaggerated anxieties about the dangers hyped by fear-mongering conservatives.

For Carter, in a 1977 commencement speech, it was “our inordinate fear of communism” that Americans needed to overcome. For Obama, in his 2009 Cairo address, it was the “fear” and “mistrust” that had grown between the West and Muslim world in the wake of the 9/11 terrorist attacks. Both men came into office emphasizing the promotion of human rights as a crucial dimension of American foreign policy. And both men gave the impression that their good intentions would be enough to accomplish these Herculean tasks.

Unfortunately, as is often the case, the reality of the world came crashing down.

It is barely remembered today, but, for all the derision heaped upon Carter as a weak and feckless President, he eventually responded to foreign aggression in tough and concrete ways. In November 1979, Iranian revolutionaries — fresh after having overthrown the American-allied Shah — seized the U.S. embassy in Tehran, taking 52 American diplomats hostage. In December, the Soviet Union invaded Afghanistan.

Gone was the President Carter who had scolded Americans for their “fear” of the communist behemoth.

By January, Carter announced a series of proposals directed at weakening America’s adversaries. First was a 5% increase in defense spending, a move that angered many of his Democratic allies in Congress who had taken to slashing the defense budget in the wake of the Vietnam War.

In his State of the Union address, Carter announced what would later come to be known as the Carter Doctrine: that the United States would use military force to protect its vital interests in the Persian Gulf.

Next came an embargo on grain and agricultural technology to the Soviet Union. Carter also declared that the United States would boycott the 1980 Moscow summer Olympics unless the Soviets withdrew their troops from Afghanistan. When they did not, he began covert funding of Afghan rebel fighters.

Conservatives like to credit Ronald Reagan with ending the Cold War. To the extent that the collapse of the Soviet Union was brought about by American policies and not the internal contradictions and weaknesses of the communist system itself (a debate that engages historians to this day), the last year of the Carter administration laid the groundwork.

The correlations between the world situation in the twilight of the Carter administration and in the second Obama term are hard to ignore. Once again, Russia has invaded a neighbor. Only this time, that neighbor is on the European continent, and Moscow went so far as to annex — not merely attack — its territory. And once again the Middle East is in flames, with the prospect of another Islamist movement taking control over a state, this time in Iraq.

But rather than respond to the collapsing world order by supporting our allies and undermining our adversaries, the Obama administration dithers. It is an indication of just how worrisome the situation is that many in Washington are pining for the resolve and fortitude of Jimmy Carter.

For months, the beleaguered Ukrainians have requested the most basic of military aid. The administration sends Meals Ready to Eat. Even hard-hitting, “sectoral” sanctions aimed at the Russian economy are viewed as too provocative.

Last year, Obama declared a “red line” on Syrian dictator Bashar Assad’s use of chemical weapons against his own people. Assad’s deployment of such weapons, the world was told, would constitute the sort of breach of international law and norms requiring an American response.

When Assad did use such weapons, Washington allowed itself to be coopted into a farcical deal — proposed by that most altruistic of world leaders, Russian President Vladimir Putin — that saw the purported removal of Assad’s chemical arsenal. The message from Washington to Assad: You can continue murdering your people en masse and destabilizing the entire Middle East, but just do so using conventional weapons.

But even that solution was full of holes. Days ago, the Organization for the Prohibition of Chemical Weapons announced that evidence it has gathered from the field “lends credence to the view that toxic chemicals, most likely pulmonary irritating agents such as chlorine, have been used” against civilians. Two senior administration officials working on Syria, special advisor for transition Fred Hof and Ambassador to Syria Robert Ford, resigned their posts rather than continue participating in this charade.\\

Few take America, least of all Secretary of State John Kerry, at its word anymore. Earlier this week, Kerry demanded that Russia urge separatists in Ukraine to disarm “within the next hours, literally.”

Or what? This empty threat followed months of similar reprimands from Washington.

Two days earlier, Kerry was in Cairo meeting with Abdel Fatah al-Sisi, Egypt’s military dictator. The United States had just released millions of dollars in military aid to Egypt, aid that had been frozen after al-Sisi launched a coup to topple the country’s democratically elected Muslim Brotherhood president last year. “We also discussed the essential role of a vibrant civil society, free press, rule of law and due process in a democracy,” Kerry told the New York Times.

Hours after Kerry’s plane took off, an Egyptian court demonstrated the country’s commitment to “free press, rule of law and due process” by sentencing three Al Jazeera journalists to long prison sentences.

So convinced was he that American presence, rather than absence, causes problems, Obama hastily exited Iraq in 2011 rather than try to negotiate an agreement that would have left a stabilizing American military force in the country.

Obama and his surrogates endlessly complain about the “disaster” they inherited from the Bush administration there, but the country was largely pacified by the time Obama entered the White House. Today, due largely to American absenteeism in the region, Islamist militants that make Al Qaeda look like a Rotary Club control a large chunk of the country.

Obama’s hands-off approach seems to be aimed at appeasing a domestic constituency that sees diplomacy, no matter how toothless, as the best way to maintain peace. A recent poll conducted by the Pew Research Project finds that an overwhelming 91% of “solid liberals” believe that “good diplomacy” is the best way “to ensure peace” while only 5% see “military strength” as having that effect.

But even “good diplomacy” is too much to expect from this administration. Over the past six years, no issue received more diplomatic attention from Obama, as well as Kerry and his predecessor Hillary Clinton, than the Israeli-Palestinian conflict. Despite countless trips to the region from high-ranking American officials, the parties are further apart today then they were when Obama swore the oath of office.

Along with Israeli-Palestinian peace, global nuclear disarmament was the other grand Obama diplomatic project. This was always woolly-headed – but this goal, no matter how well-intentioned, was dealt a devastating blow with Russia’s invasion and annexation of the Crimean Peninsula. In 1994, Ukraine signed (with the U.S., Great Britain and Russia), the Budapest Memorandum, which stipulated that, in exchange for delivering its then-considerable nuclear weapons stockpile to Moscow, Kiev’s territorial integrity would be assured.

Now that Russia has blatantly violated the terms of that document, how can Obama convince a nuclear weapons-aspirant state like Iran that it does not need such an arsenal to ensure its own survival?

The administration and its supporters are banking upon hopes that Americans will remember their distaste for the foreign policy of George W. Bush as some sort of salve against its own, present-day failures.

The other day, former President Bill Clinton lashed out at the Bush administration, telling NBC News that “what happened in Syria wouldn’t have happened in Iraq” had the U.S. not invaded in 2003. Given the sectarian fissures opening up across the region thanks in large part to the Obama administration’s allowing the Syrian morass to fester for so long, confidently predicting that the tremors would have left Iraq untouched were Saddam Hussein still in power is a wild claim.

And keep in mind that this was the same President Clinton who himself bombed Iraq, signed the 1998 Iraq Liberation Act committing the United States to Hussein’s overthrow, and who vocally supported “Bush’s war” — along with the vast majority of his Democratic colleagues.

Global instability is on the rise and faith in America’s stabilizing presence is on the decline, and all we have from Washington are empty, millennial-friendly buzz phrases. “Leading from behind” was how one, too-clever-by-half administration official termed Obama’s global strategy. Hitting “singles” and “doubles” is Obama’s own, jocular assessment of his foreign policy. And now, “Don’t do stupid s—” is the mantra being repeated throughout the halls of the White House and State Department.

“Don’t do anything at all” seems more apt a description of this administration’s approach.

Kirchick is a fellow with the Foreign Policy Initiative.  This article was published in the New York Daily News.