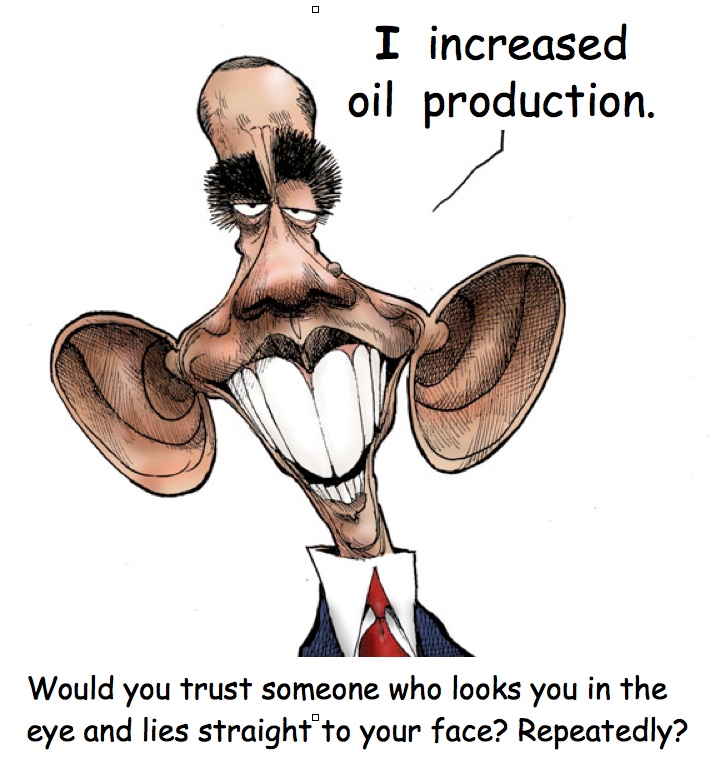 Deception: There he goes again. The president is taking credit for an economic recovery that isn’t happening and a surge in oil production he’s had nothing to do with. If he can’t be honest, it’s up to us to set the record straight.

While touring an Ohio steel mill Thursday, President Obama talked about jobs and the economy bouncing back.

He prattled on about factories “reopening their doors” and businesses “hiring new workers.” He even went so far as to imply that his administration has “been trying” to “rebuild a new foundation for growth and prosperity to protect ourselves from future crises.”

Meanwhile, in the real world, the U.S. economy continues to struggle under his watch.

As we mentioned earlier this month, “his recovery is by far the weakest since the Great Depression.”

Not much to be proud of. Yet the White House has the nerve to brag about the economy.

But shamelessness, not honesty, is the White House’s hallmark. Of course it’s that lack of shame that also allows the administration to boast about America’s gushing oil output, which has surpassed imports for the first time since 1995, despite the Obama war on fossil fuels.

Not only has U.S oil production exceeded imports for the first time in nearly 20 years, America is on its way to being the world’s top oil producer, a watershed that will be reached in 2015, according to the International Energy Agency’s most recent World Energy Outlook.

We expect the Obama administration will take credit for that, as well. But it is not responsible for any of the progress made in oil production.

Indeed, it has done more to curb oil output than increase it.

While domestic oil production is growing, it is increasing only on private and state lands. The American Petroleum Institute notes that “in areas controlled by the federal government, production has actually fallen on President Obama’s watch.”

We’ve made the same point in the past, but we feel that we have to make it again, because this administration continues to mislead on the subject.

Going back just to September, we reported that the Western Energy Alliance was pointing out that the federal government “continues to erect obstacles to domestic oil and gas production” and that the Congressional Research Service had found that “all the increases in production since 2007 have taken place on non-federal lands.”

A month earlier, we quoted Bruce Vincent, president of Houston-based Swift Energy, who said the Obama administration had “done nothing but restrict access and delay permitting.” The White House, he added, “threatened this industry at every turn.”

We also quoted Daniel Kish, who reported the previous October in U.S. News and World Report “that oil and gas production is actually falling on federal lands” with Obama in office. It was Kish who maintained that increased oil production “is happening in spite of the president’s polices, not because of them.”

Obama ran for president on the audacity of hope. He even wrote a book under that title.

This article was written by the editorial board of The Investor’s Business Daily.