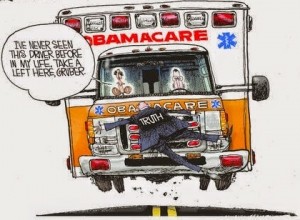 ObamaCare was sold as a means to making health care more affordable. It even makes that claim in its official name. But its creators knew it wouldn’t, and they forced the idea into law anyway.

Obama adviser Jonathan Gruber seems to be carving out a new career as the go-to guy for those of us who were and still are opposed to a government takeover of the health care sector.

Statements he made while the Democrats were crafting the Patient Protection and Affordable Care Act show to what depths they sank to deceive the public to get the bill passed.

First, Gruber once said that “the stupidity of the American voter … was really, really critical” to the passage of ObamaCare. He gleefully admitted that “the lack of transparency is a huge political advantage” for ramrodding the bill through Congress.

Now, thanks to the Daily Caller, the public knows that Gruber, who was an ObamaCare architect, knew that the “affordable” part of the Affordable Care Act was a lie and expressed it in an October 2009 lecture at Syracuse University.

“There’s a real debate about what is affordable, and there’s no right answer here,” Gruber said in a talk that became a policy brief. “The problem is it starts to go hand in hand with the mandate; you can’t mandate insurance that’s not affordable.”

Cost controls, he said, could just come later, after everyone was covered. And one way to control costs, he explained, would be to tell patients “they can’t have something they want.”

So along with a lack of affordability, there isn’t full patient protection under ObamaCare, either. Patients can still be denied care.

Three years after he made his remarks at Syracuse, Gruber said in a podcast — also exposed by the Daily Caller — that he wished “President Obama could have stood up and said, ‘You know, I don’t know if this bill is going to control costs. It might, it might not.'”

On the other side of the aisle, however, Republicans were talking about ObamaCare’s unaffordability. Rep. Paul Ryan of Wisconsin called it “a fiscal Frankenstein.” Sen. Mike Enzi of Wyoming said that “this bill is anything but affordable.”

The kicker is the Democrats knew it, too, but publicly denied the facts all the way to the bill-signing ceremony and beyond. Honesty and openness were sacrificed for the sake of a bill that won’t work as promised and the country doesn’t even like.

As Gruber has acknowledged, ObamaCare was written in a tortured way, not for effectiveness but for passage. That’s not the way a representative government with constitutional limits should work.