ObamaCare: It’s unsustainable; better to scrap it and start anew 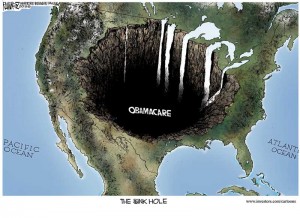 Confirming the disconnect between the empty-promise pretenses on which ObamaCare was sold and its real-world effects in practice is a new report from Medicare actuaries that says health spending in ObamaCare’s first 10 years will be about $621 billion higher than it would be without that train wreck of a law.

That’s $7,450 more in health spending per family of four through 2022, according to Duke University health-policy expert Chris Conover, writing for The Apothecary, a Forbes blog. And that figure’s contrast with candidate Barack Obama’s 2008 promise that he’d lower such families’ premiums “by up to $2,500” — during his first term! — is both grim and stark.

The Medicare actuaries’ report is consistent with their prior reports showing ObamaCare would increase, not decrease, health spending. It’s the latest evidence that Mr. Obama made America the “absurd promise” that Mr. Conover says it is.

And contrary to what some “progressives” believe, the bill for that increased health spending ultimately will be paid by America’s families. Insurers and the federal government will pass along those higher costs to them — in the form of higher premiums and taxes.

“In short, American families manifestly will be absorbing every single penny” of ObamaCare’s $612 billion in additional health spending, Conover says. And while he urges a year’s delay to “fix” ObamaCare, better to scrap it entirely and start fresh — without absurd promises or unrealistic scenarios.

This op-ed article was written by the editorial board of the Pittsburgh Tribune Review.