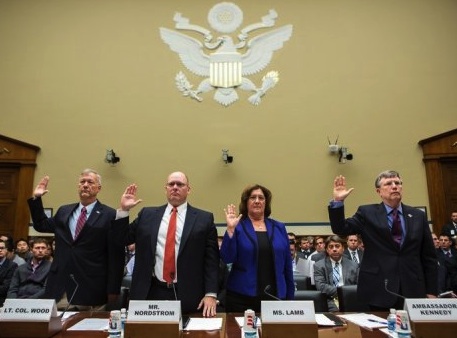 Here are excerpts from articles

all across America reflecting the growing realization that Obama and his spokesmen and his administration purposefully misled the American public for weeks about the attack on the consulate in Benghazi that resulted in the deaths of four Americans. It is revealing that the President and his team refused to come clean until Congress held hearings. Only then, the truth started to leak out.

The White House never had any evidence that the attack was the result of a spontaneous mob that got out of control. They made that up. It was a lie. The White House never had any evdience that a movie caused the attack in Benghazi — none at all. They made that up too. That too was a bald faced lie. These lies were told by the President himself and by his personal spokesman and by his Ambassador to the UN who was sent out to sell the lies on TV.

This is a serious scandal — far bigger than Watergate. Four Americans are dead and the White House tried for weeks to cover up the details because it is an election year and Obama hopes to avoid accountability.

When will President Obama and his administration come clean about the events surrounding the deaths of U.S. Ambassador to Libya Chris Stevens and three other Americans? For nearly a week after the Sept. 11 attack on the U.S. consulate in Benghazi, the White House insisted the killings of Stevens, security contractors Glen Doherty, 42, of Encinitas, and Tyrone Woods, 41, of Imperial Beach, and information officer Sean Smith were the result of a spontaneous uprising triggered by an anti-Muslim video posted on the Internet.

But on Monday, several reports raised doubts about the administration’s honesty and competence. Their findings:

•On Sept. 12, even as White House press secretary Jay Carney was blaming the video, a State Department undersecretary briefed dozens of congressional staffers that the consulate attack almost certainly was a sophisticated terrorist operation.

•The former head of the U.S. security team in Libya said the State Department ignored his requests and those from other security officials to increase security for Stevens and others, not continue to reduce it.

•In a cable that Stevens approved the day he died, Washington was warned that security was deteriorating in Benghazi – not because of the video but because local militias upset with U.S. maneuvering in Libya were no longer keeping the peace.

This is a major scandal, as at least ABC News and CBS News seem to understand. Four Americans are dead, and the White House tried to hide the circumstances of their deaths to help a president in a tough re-election fight. If this issue fades from the headlines, that is a stunning commentary on the national media, and not a flattering one. 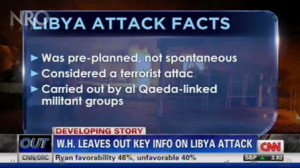 A couple of days after the Benghazi fiasco, I wrote here:

The 400-strong assault force in Benghazi showed up with RPGs and mortars: That’s not a spontaneous movie protest; that’s an act of war, and better planned and executed than the dying superpower’s response to it. Secretary Clinton and General Dempsey are, to put it mildly, misleading the American people when they suggest otherwise.

Four weeks on, the official spokespersons of the government of the United States are belatedly catching up to this third-rate foreign hack’s version of events. The State Department has now conceded that there was no movie protest at all, and that it was, in fact, one of the most sophisticated military attacks ever launched at a diplomatic facility.

Both these very obvious points were surely known to Washington by 6 a.m. Eastern on Wednesday September 12, by which time the surviving consulate staff had been evacuated to Tripoli. Yet Ambassador Rice, President Obama, et al., were still blaming the video days later. Obama and Secretary Clinton always refer to Ambassador Stevens as “Chris” — Chris this, Chris that — as if he were a treasured friend or intimate. Yet they and the sad hollow men around them dishonor their “friend” in death.

Given the conflicting reports on the manner of his demise, any chance of an autopsy? Or is that also politically inconvenient?

“This is significantly different than what we were being told at the time. At the time, as you recall, we were told it was a protest that went bad and became an attack. Now, we are told there was no protest going on outside that embassy. The first indication that they heard anything outside the walls of the embassy — of the consulate compound, was an explosion and gunfire,” Karl reported.

The more we learn about the 9/11/12 murder of Libyan Ambassador Chris Stevens in Benghazi, the worse it looks for everyone who put him in that position and then spent weeks lying about it.

The indispensible Eli Lake writes at the Daily Beast:

Just two days before the 9/11 anniversary attack on the U.S. consulate in Benghazi, two leaders of the Libyan militias responsible for keeping order in the city threatened to withdraw their men.

The brinksmanship is detailed in a cable approved by Ambassador Chris Stevens and sent on the day he died in the attack, the worst assault on a U.S. diplomatic mission since the 1979 hostage crisis in Iran. The dispatch, which was marked “sensitive” but not “classified,” contained a number of other updates on the chaotic situation on the ground in post-Gaddafi Libya…

The cable, titled “Benghazi Weekly Report – September 11, 2012,” notes the dangerous environment in eastern Libya. It does not, however, make a specific plea to Washington for more personnel or more security upgrades, and concludes that much of the violence in the country consists of Libyans attacking other Libyans, as opposed to specific plots directed at the West. Indeed, it says that in a meeting with Stevens, members of the Benghazi Local Council said security in their city was improving.

At the same time, the cable makes no mention of the anti-Muslim YouTube video or planned protests at the consulate, two key pillars of the Obama administration’s initial narrative on the 9/11 attacks.

Everybody already knows they lied, but this is just more evidence.

Did the State Department ignore clear warnings? Sure sounds like it.

“An ill-advised drawdown of security.” Oh, but it was all because of a YouTube video, remember? How was the State Department supposed to know there was a problem, just because everybody was telling them so? For months?

Mitt Romney spoke about this today. Here’s an excerpt from his remarks, courtesy of Fox News Insider:

“The attacks on America last month should not be seen as random acts. They are expressions of a larger struggle that is playing out across the broader Middle East—a region that is now in the midst of the most profound upheaval in a century. And the fault lines of this struggle can be seen clearly in Benghazi itself.

The attack on our Consulate in Benghazi on September 11th, 2012 was likely the work of the same forces that attacked our homeland on September 11th, 2001. This latest assault cannot be blamed on a reprehensible video insulting Islam, despite the Administration’s attempts to convince us of that for so long. No, as the Administration has finally conceded, these attacks were the deliberate work of terrorists who use violence to impose their dark ideology on others, especially women and girls; who are fighting to control much of the Middle East today; and who seek to wage perpetual war on the West.”

And the only people telling you anything different are the ones who want to keep lying to you for four more years.

Democrats opened up this line of attack in two ways. First, they very overtly brought up the topic repeatedly in Charlotte during the convention, especially on the final night, as John Kerry, Joe Biden, and Obama himself attacked the Republican ticket for their lack of experience on foreign affairs…

The incoherent and downright dishonest response to the Benghazi attack, however, opened up a huge opportunity on what had been perceived — by Democrats, at least — as the strongest part of Obama’s foreign-policy track record: the Arab Spring. In fact, the Benghazi attack was an all-around debacle, with the State Department failing to respond to obvious and building threats with better security to the outrageous deceptions staged by the White House to spin the terrorist attack as a movie review riot. The sheer incompetence leaves Romney an opening to underscore the narrative of a chief executive far out of his depth, and leaving America flailing for direction and success at home and abroad.

It’s not a tough case to make, at least to anybody who’s been paying attention for the past month. As for anybody who hasn’t, just show them this, courtesy of the Heritage Foundation:

“Bumps in the road.”

All Romney has to do is convince people he can do better than that. Obama’s inept, dishonest response to the Benghazi attack makes his debate performance look like a stunning success.

Hey, look over there! Big Bird!