Obama’s Economic Growth Record Is The Worst In 60 Years

0.8% — The Abysmal Rate of Economic Growth under Obama 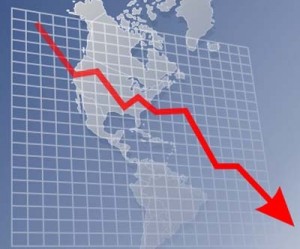 President Obama’s defense of his economic stewardship has effectively amounted to this: At least we no longer have the Bush-era economy. With an entire 4-year term in the books, it’s now possible to confirm, and to lament, the essential truth of those words.

Prior to Obama, the second term of President Bush featured the weakest gains in the gross domestic product in some time, with average annual real (inflation-adjusted) GDP growth of just 1.9%. That’s according to figures from the federal government’s own Bureau of Economic Analysis (BEA).

It was the worst tally achieved during any presidential term in the past 60 years.

And here’s the kicker: If it had been doubled (to 1.6%), it still would have been the worst tally in the past 60 years.

True, Obama inherited a recession, but that recession only lasted for the first six months of his term. Eighty-eight percent of his term was post-recession.

Moreover, the abysmal performance of the economy in 2009 (Obama’s first year in office) gave it plenty of opportunity to grow rapidly in the years to follow — there was essentially nowhere for it to go but up.

But it’s what the economy did in the subsequent three years in each instance that’s striking:

Of course, GDP growth isn’t the only measure of economic prosperity — and, in truth, even the puny 0.8% rate of growth under Obama hasn’t extended to those who aren’t well connected to the Big Government-Big Business alliance. On Main Street, things haven’t gotten 0.8% better; they’ve gotten worse.

Figures from the Census Bureau’s Current Population Survey, compiled by Sentier Research, show that the real median American household income dropped 8.1% — and more than $4,500 — from December 2008 to December 2012. (It rose 1.7% during Bush’s second term — a nearly 10-point swing vs. Obama’s tally.)

What’s more, according to figures from the Bureau of Labor Statistics, the portion of Americans at or above the age of 16 who were employed dropped by 2.4 percentage points from December 2008 to December 2012 — from 61 % to 58.6%. (It dropped by only 1.4% during Bush’s second term.)

If there were a Triple Crown of economic failure for one presidential term, it might justly be awarded to a president who managed to oversee only 0.8% average annual growth (the worst in six decades), failed to steer even that paltry growth toward the middle class (whose real incomes dropped substantially), and likewise failed to spur greater employment (as employment dropped significantly).

It will be interesting to see how much longer Obama — and his fawning allies in the press corps — can convince Americans, in spite of all evidence, that they have it better now than they did under Bush.

Anderson is a senior fellow at the Pacific Research Institute. He was the senior speechwriter for Secretary Mike Leavitt at the U.S. Department of Health and Human Services. This article first ran at InvestorsBusinessDaily.