Freedom Centers Constitutional and Political Freedom On Catholic Push Calls, If Not the Obama Campaign, ...

On Catholic Push Calls, If Not the Obama Campaign, Who? 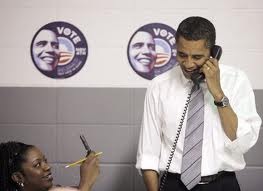 Are Catholic voters getting “push calls” that question how they can vote for former Massachusetts Gov. Mitt Romney, a Mormon? According to President Barack Obama’s re-election campaign, the answer is “No.”

When the issue was raised earlier this week in this column, the Obama campaign, through a spokesman, reiterated its position that a candidate’s religion was “out of bounds.”

“The activity being attributed to the Obama Campaign and our Catholics for Obama program is categorically false,” the spokesman said.

Well, as Trace Adkins says, “Whooo-eee. Shut my mouth. Slap your Grandma.” It’s not clear from the carefully worded statement provided by the campaign to U.S. News and World Report whether they are simply denying they are behind the calls or are claiming they are not happening.

It’s easy to infer the latter. Nevertheless, someone is making them. And they can’t be traced back to their origin because the number appearing on Caller ID is nonexistent. According to one person who received a call, the person making the “push call” she received identified herself as an Obama-supporting Catholic. When asked about the president’s support for legal abortion and gay marriage, the person making the call asked how Catholics could in good conscience support Romney, a Mormon “who doesn’t believe in Jesus Christ.”

In addition, the president’s supporter making the call also said Planned Parenthood does not promote abortion, that President Obama does not support abortion, and also asked how the person receiving the call felt about the anti-Paul Ryan “Nuns on the Bus.” Someone is making these calls, in a pattern that suggests they are looking for young voters, newly registered and Catholic, which suggests a level of political sophistication above and beyond that of the average activist.

The Obama campaign’s statement, which some might read as a “nondenial denial” represents a failure of leadership on the president’s part. Remember that when Missouri Republican Senate candidate Todd Akin left jaws agape after saying women had a natural biological response that prevented conception from occurring during a sexual assault that a number of senior party leaders, Romney among them, quickly stepped up and called for Akin to reconsider remaining in the race.

That was leadership. Even though Akin apologized for the remark and admitted he had been wrong in making it, the support of the national GOP for his candidacy has remained tepid—even with control of the U.S. Senate potentially resting on the outcome.

In the case of the pro-Obama “push calls,” the president’s campaign denies it is behind them but, rather than call on those making them to stop, wants people to believe they aren’t happening. That’s not good enough. How many times have liberals used a statement made on a candidate’s behalf by a supporter or third party to blacken the reputation of every Republican, finding code words where none exist, demanding immediate denunciations and insinuating the statement proves the party is full of closet bigots, secret misogynists, or worse? Quite often, as memory serves.

The Obama campaign needs to do more than deny they are behind these calls. They need to come clean about what they might know. If the political operatives on the president’s or the party’s payroll know who is behind them, they need to identify the guilty party or parties. And the president needs to say, explicitly, that whoever is making these calls needs to stop—and that they need to stop now.