One way to respond to Putin: Don’t let him control the Internet 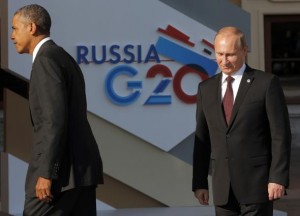 Russian President Vladimir Putin has authorized, and his military forces have carried out, an armed invasion of a neighboring nation, Ukraine, whose sole transgression was wanting closer diplomatic and economic ties with the West. Despite wide condemnation of the unprovoked attack, Putin is unrepentant and China is now standing with Russia. As if the invasion wasn’t provocative enough, Putin also test-fired an Intercontinental Ballistic Missile (ICBM). These are dangerous times.

While the administration’s response has been muted, there has been no shortage of suggested ways the U.S. could signal its strong objection — recalling our ambassador, imposing sanctions, removing Russia from the G8 and reverting back to the G7, sending an naval carrier group to the region, reconstituting plans to build a missile defense capability in Eastern Europe, and maximizing our own energy production to weaken Russia’s economy and its hold on much of Eastern Europe. These ideas have merit, but some are longer-term plans. It is not clear how the administration will respond to this crisis.

Here is one thing the U.S. can do immediately, and at no cost, and about which there should be no disagreement — the U.S. should not give away Internet governance to international voices that would include Putin and further empower him. The White House should announce that they are immediately ending any consideration of giving away the Internet’s controls to international voices that could include Putin or other autocrats like him.

Very quietly but very effectively, there are voices around the globe and even within the Obama administration that are calling for the Internet to no longer be governed by the U.S. Instead, they want America to turnover Internet governance to a UN-like or European Union-like organization. These voices want the Internet to be less America-centric and more international. These voices want Russia, China, Brazil and others to have a much more prominent voice in Internet governance and the U.S.  to have a substantially smaller role.

Later this month in Singapore and a few weeks later in April in San Paulo, Brazil, the world will meet to discuss internet governance and push for the U.S. to give up its governing authority over the Internet to an international group. The administration is under a lot of pressure to express its sorrow for the Edward Snowden revelations by giving the world a peace offering — control and governance of the Internet. This is a terrible idea. It does not promote America’s interests and it doesn’t even promote the world’s interests.

There is nothing to be gained by allowing the Putins of the world to gain control of the Internet. Before Putin invaded Ukraine and began firing ICBMs, he was famous for abruptly cutting off natural gas supplies to Europe in the middle of winter — leaving millions to freeze — whenever he wanted to bully the affected nations into political or economic agreements that favored him. Does anyone think that control of the Internet would not be similarly abused by a global authority?

The U.S. needs to stand up for its interests. We invented, built, and continue to run and govern the Internet. We allow the entire world to use it. We do not turn it off for nations that are hostile to us. But it is our invention and creation, and it has become a huge economic engine. There is no reason we should simply give it away.

The Internet is also a tremendous source of international intelligence. In Syria and Iran, the situation on the ground leaks out onto the Internet because it allows anyone with a phone or a tablet to tell the world what is actually happening. Tyrants can no longer control the flow of information. We know about Russia’s invasion of Ukraine in part because we have video and photos shot on the ground by locals. Is there any doubt that Putin would try to shut down such information if he were in charge of the Internet?

It is time that every American stand up and demand that the Obama administration stop all plans of turning over Internet governance and control to international voices or groups. It is presumptuous for any foreign voice to demand that we give away the Internet.

Ask yourself one simple question — will turning over Internet governance over to Russia, China, North Korea, and Iran make the Internet more open, reliable, or transparent?

The answer is clearly no — and that should be the answer the administration forcefully and unapologetically gives to the anyone who says America should give away its stake in Internet governance.

George Landrith is the president of Frontiers of Freedom.