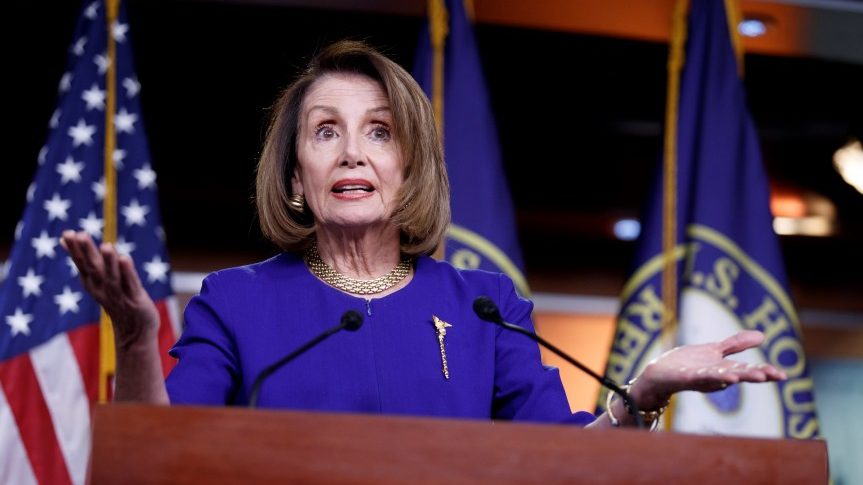 Democrats are rushing into impeachment despite the knowledge that, given what we know now, the Senate will not remove Donald Trump from office. Why is Nancy Pelosi doing this?

Because she has resigned herself to the argument that impeaching Trump is the way for Democrats to win the presidency and Senate 13 months from now. Pelosi’s bank shot isn’t aimed at Trump’s conviction on the Hill. It’s aimed at his loss at the polls.

American University professor Allan Lichtman best expressed the political logic in a recent op-ed. His “13 keys” model, along with most quantitative forecasts, currently favors Trump’s reelection. Lichtman says impeachment would change that by tarnishing the incumbent with scandal. The facts of the case, and whether the Senate convicts, do not matter.

Impeachment alone would not doom Trump according to Lichtman’s model. What it might do is trigger additional events that would help Democrats. The cumulative effect would be a Republican loss.

The conventional wisdom that impeachment backfired on the Republicans in 1998 has been overturned. Yes, the argument goes, the GOP gave up some House seats. That did not stop them from winning the presidency and both chambers of Congress two years later. Impeachment contributed to “Clinton fatigue.” It boosted the chances of a candidate who promised to restore dignity to the White House. The same could happen in 2020.

Advocates of impeachment say the inquiry, whether an official “proceeding” or not, might damage Trump’s approval rating to such an extent that he will draw forth a significant primary challenger, a third-party candidacy, or both. Nor is political tumult and uncertainty helpful for a global economy roiled by trade war and lack of investment. Recession would make Trump’s downfall even more likely.

If impeachment comes to a vote in the House, Democrats representing Trump districts will be risking their political futures. Pelosi seems willing to take that risk. She knows this knife cuts both ways.

Mitch McConnell says that if the House votes to impeach, the Senate will hold a trial. It won’t just be Democrats Doug Jones (who is in cycle) and Joe Manchin, Jon Tester, and Kyrsten Sinema (who are not) in awkward positions. So will Republicans Susan Collins, Martha McSally, Cory Gardner, and Thom Tillis, all up for reelection. Democratic victory in the Senate is critical for progressives. McConnell is Horatius standing between Elizabeth Warren and structural reform of the Senate, the judiciary, and the U.S. economy.

Pelosi has fixed impeachment on the July 25 phone call between Trump and Ukrainian president Volodymyr Zelensky for three reasons. The scandal fits on a television chyron: “Trump pressured Ukraine for dirt on Biden.” The process can be run through her ally Adam Schiff’s Intelligence Committee rather than through the obstreperous Jerry Nadler’s Judiciary. And the national security connection provides cover for the seven moderate freshmen with backgrounds in defense and intelligence agencies.

What makes Ukraine different from the Russia investigation is the simplicity of the alleged wrongdoing. Everyone can read the transcript of the Trump-Zelensky phone call and decide whether its contents warrant impeachment and removal from office in an election year. The Democrats need to move quickly, however, and maintain focus. Otherwise they risk losing the plot.

Speed is essential if Ukraine is to avoid the fate of other supposedly Trump-destroying scandals that collapsed from either a dearth of outrage or internal contradictions. Stormy, Avenatti, Omarosa, Scaramucci, Cohen have all gone the way of the dodo. The Russia investigation was too confusing, its results too murky, its special counsel too confused to end or cause lasting damage to Trump.

For Ukraine to be different, the Democrats must uncover evidence that will convince independents and some Republicans the president abused his office. That hasn’t happened yet. Already there are signs of overreach: the attempt to rope in William Barr and Mike Pompeo, tenuous arguments that the Zelensky call somehow broke the law, and calls for canceling Rudy Giuliani’s media appearances and for shutting down the president’s Twitter feed. Pelosi is moving quickly under the assumption that the longer the process takes, the more opportunities Trump will have to wriggle out of this vise, and the more Democrats will become distracted and dissolute.

“How can I lose?” asked Paul Newman’s character Fast Eddie in The Hustler. Pelosi might ask the same question as she enters her own high-stakes tournament. Eddie thought he had a pretty good bank shot, too.