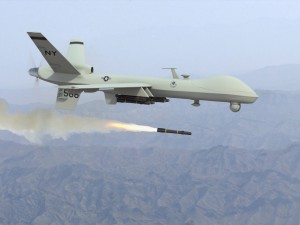 On Friday, President Barack Obama ruled out sending U.S. troops back into Iraq to fight the Islamic State in Syria and Iraq, or ISIS, fighters as they take over large areas of the country. He did leave the door open to a set of nebulously named “other options.” What form might those take? In May, Iraqi Prime Minister Nouri al-Maliki made clear that he would allow the U.S. to carry out Predator and Reaper drone strikes in the country against groups hostile to his government. Today, many in Washington are asking when will the U.S. send drones back to Iraq?

Armed drones may provide the administration with a cosmetic military solution for the ongoing crisis, affording the U.S. the opportunity to look tough and engage ISIS without endangering U.S. troops or creating the impression that we we’re re-fighting a war that we declared over in 2011. Unfortunately, armed drones by themselves would be relatively ineffective against an enemy like ISIS, the brutal offshoot of al-Qaeda, according to experts.

Drones vs. ISIS: The Pros

Drones against ISIS would have the same benefits that unmanned aerial vehicles have brought to every battlefield where they’ve been deployed — they’re low-cost and low-risk. Compared with traditional fighter or reconnaissance aircraft, they can fly longer without stopping, allowing for better intelligence collection and targeting. When they’re shot down, you don’t have worry about a potential hostage situation or death of a pilot.

With no Status of Forces Agreement in place between Iraq and the United States, drone warfare could give some political cover for Iraqi leaders.

“With a drone overhead, Maliki can credibly claim to the Iraqi people (and others in the region like Iran) that he didn’t allow any U.S. boots on the ground or U.S. persons in his country. It’s a flying robot, after all. This could matter politically,” according to Sam Brannen, a senior fellow with the Center for Strategic International Studies.

“U.S. armed drone strikes in Iraq might have some symbolic resonance,” agreed Audrey Kurth Cronin, the director of Center for Security Policy Studies for George Mason University who has written on the use (or non-use) of armed U.S. drones in Syria.

Given the delicate nature of the diplomatic relationship with Iraq, and the buildup of ISIS forces in the region, targeted drones strikes might be easy to carry out. “The U.S. could probably deploy them relatively quickly if it moved over aircraft already in the region, say from Afghanistan,” said Paul Scharre at the Center for a New American Security.

Drones vs. ISIS: The Cons

Too much ground has been lost, the enemy has grown too large, and available support from the Maliki government is too absent for armed drones to be a decisive weapon against angry hordes. Much like in Syria, the U.S. doesn’t hold enough ground to use them effectively. The same could be said of Pakistan, where targeted drone strikes recently resumed, but in that country, the targets are more clear. They perform best not against large groups of fighters but very specific targets. In Iraq, drones present a little risked, nothing gained proposition.

“We do not have good intelligence about what is going on the ground; it would be hard to identify the right targets. We don’t have human intelligence assets or troops available to help guide them tactically. Third, we could hit civilians or friendly forces, giving ISIS a huge propaganda coup that would be worse than no U.S. intervention at all,” said Cronin.

Pentagon spokesman Rear Adm. John Kirby said Friday that the U.S. has stepped up intelligence in the past several days. But he acknowledged that “intelligence isn’t always perfect.” He couldn’t confirm reports that units from the Iranian Revolutionary Guard had entered Diyala province, and estimated that the number of ISIS fighters is in the thousands.

“It’s not a monolithic organization. Extremist groups rarely are. I don’t have any particular insights into their makeup and their manning. I mean, clearly, there’s a lot of foreign fighters involved here,” Kirby said at a Pentagon briefing on Friday.

“It’s not a hierarchical organized nation-state force,” he said.

Scharre said that drone strikes may help relieve the symptoms of the current unrest, but they hardly provide a cure. The issues in Iraq are too deep for flying robots to fix.

Our drone options in Iraq would be better, in other words, had we planned for a situation like this earlier. Now, the mess is too big for the robots to clean up after us.

Patrick Tucker is technology editor for Defense One.