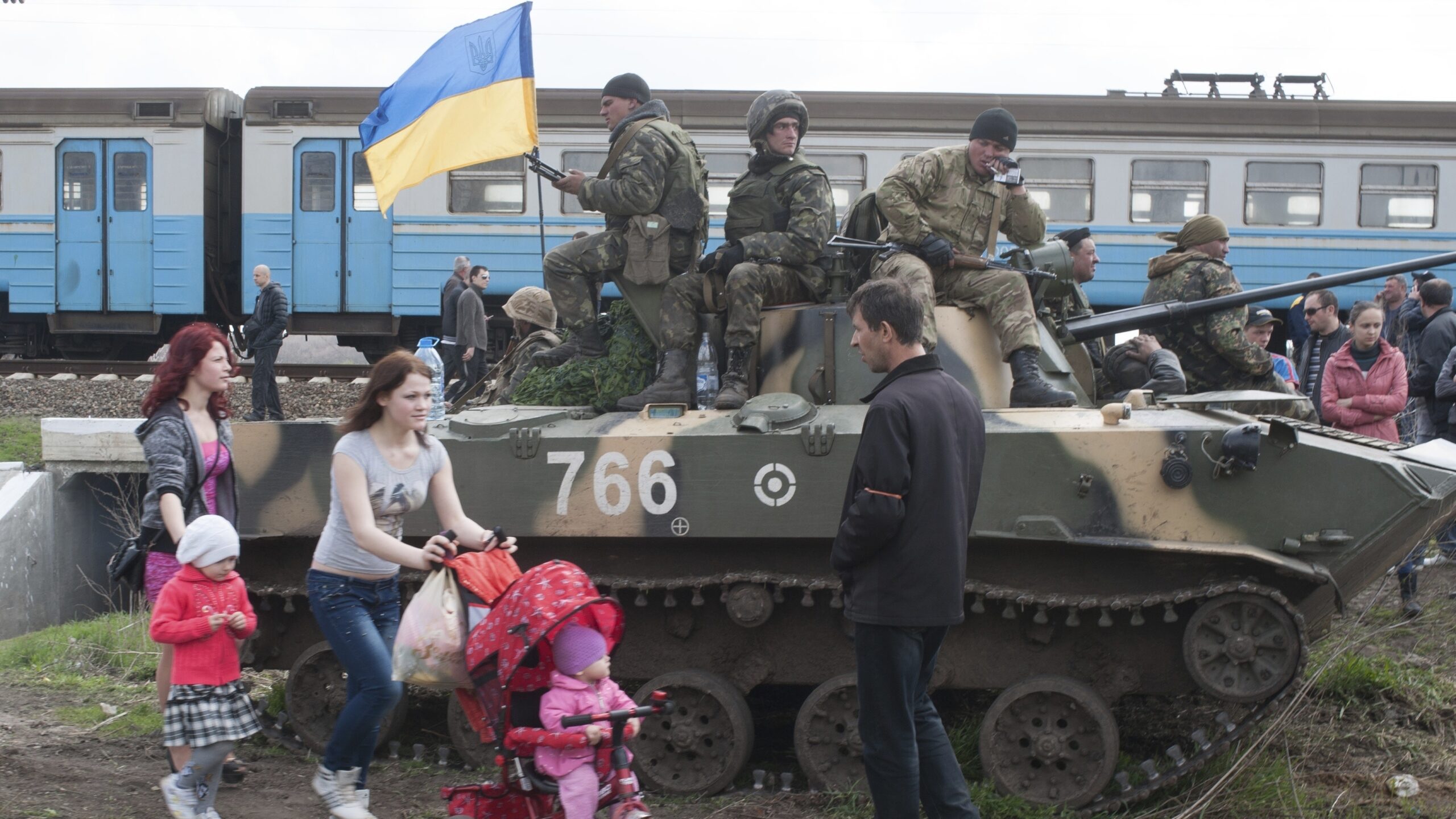 The annals of human history are filled with innumerable acts of barbarism and tyranny committed by ruthless warmongers, religious fanatics and their ethnically hate-filled genocidal followers.  After the countless battery of heinous crimes committed by Hitler’s Germany, Stalin’s Soviet Union and Japan’s Imperial Military before and during World War II, it was rightly expected that the light of humanism finally would emerge triumphant over the dark forces of Fascism, National Socialism, military Imperialism and the Soviet Union’s depraved utopian Communism.  However, while Germany, Italy, Japan and their former allies completely renounced Imperialism, Fascism as well as National Socialism, Russia’s leaders have never abandoned their tyrannical and revanchist domestic as well as foreign policies to restore the putative “greatness” of the thoroughly discredited Soviet Union with its colonial empire.  To wit, by the leaders of the newly minted Russian Federation, the terms Fascism, Nazism and Imperialism have been misused to emphasize their irreconcilable enmity and their fallacious use of the most strategic engagement in their quest for the restoration of the status quo ante – their uncompromising confrontation with the United States of America as well as the rest of the world.

Accordingly, from his original installation by former President Yeltsin as the new tyrant of the Russian Federation at the end of 1999, Vladimir Vladimirovich Putin has labored to recreate the Soviet Union under the old Tsarist ideology of Official Nationality.  Composed of Pan Slavism, known also as transcendent Christian Orthodoxy; Autocracy, meaning the so-called governing elite’s tyrannical supremacy; and Nationality, depicted as the racial superiority of the Russian narodnost cum  nation.  Moreover, in his capacities as President and Prime Minister, Putin has been on a mission to reassure the Russian people that the Soviet Union’s disintegration was due to the hostile machinations of foreign powers, not to the internal and international weaknesses of the pseudo Communist empire.  The empire was only gone temporarily, he concluded.  The emergence of the Russian Federation, like the mythological Phoenix rising from the eternal fire, constitutes a victory, not a defeat, he stated.  Finally, the resurrection of historical Russia is the clearest proof that the sufferings of the Russian nation will be reversed by him.  Be patient and courageous, he intoned, and I will conquer Russia’s enemies and the world.

Concurrently, a succession of American presidents have labored under the assumption that the leaders of the Russian Federation desire to politically democratize and economically modernize their realm.  The common characteristic of their views of Russia has been the utter lack of knowledge and understanding of Russian history, Russian culture and the mentality of the Russian people.  Hence, President Clinton’s “peace dividend,” President George W. Bush’s “I looked the man in the eye” amateurish fallacy, President Obama’s vainglorious belief in his imaginary brain powers, President Trump’s faith in his “art of the deal” ability, and  President Biden’s non-existent experience as well as almost zero knowledge of European and world history, have only contributed to the enhanced geostrategic confusion of the post-Soviet era.

As historians and politicians incessantly remind us, the histories of individual countries, regions and continents are interconnected.  In general, they also note that the more things change the more they remain the same.  Lastly, they bemoan the fact that the ever changing politics of the day usually negatively affect the appreciation of history.  Yet, interconnection does not mean uniformity, advancement does not always signal progress, and politically tainted interpretation and reinterpretation of the past as well as the present do not necessarily result in positive transformation of nations and societies.  Objectively, the histories of different countries that are interconnected have shown, more often than not, distinctly disparate interpretations of real as well as invented traditions, leaving their histories with substantive triviality which prevents these societies and nations from proceeding toward establishing complete democracies.

Russia’s war on Ukraine is an unrelievedly grim tale of both countries’ historical inability to overcome the past collapses of their antediluvian orders.  The resulting political, intellectual, cultural and moral madness always led to extraordinary convolutions.  Specifically, behind the demolition artist Putin there lurks the primitive, misinformed, exploited and wretched masses of the Russian people.  Conversely, behind the increasingly heroic persona of Zelenskyy stands the combined force of the heterogeneous Ukrainian nation that in its overwhelming majority desires to move west from its traditional eastern roots.

Contrary to the superficial and thus erroneous  impression of most politicians and media analysts, Putin has been a living enigma without a rational reason.  Obsessed by his Russian inferiority complex and fear of Western intellectual and cultural superiority, Putin was awestruck by the alacrity of German reunification.  These feelings of citizen Putin were compounded by the chaotic and violent events of the first decade of the newly minted Russian Federation under President Yeltsin.  Thus, when appointed Prime Minister on August 9, 1999, his first act of revenge was his brutal military operation against the independence movement of the Chechen Republic of Ichkeria against the Russian Federation.  For Putin, the two-year war in Chechnya, dubbed the Second Chechen War, was also a crusade to prove that in Putin’s Russian Federation the right of self-determination of peoples and nations will not be tolerated.  More importantly, he showed that the strongest nation in the region has no legal or moral responsibilities to respect international and domestic laws which it signed, such as the Peace Treaty of 1997 after the First Chechen War between 1994-1996.  The 1999 war on Chechnya demonstrated that the mightier nation can murder indiscriminately, steal, rape and lie at will.  The result was deep hatred toward Putin and everything Russian by those whom the former should have respected and treated as equal.  Even more egregiously, Putin’s war against the Chechens was an unambiguous declaration that he does not recognize self-discipline as a guiding principle of any political order, be it domestic or international.  By doing so, Putin made it crystal clear that as president he will be driven by ruthless and indiscriminate violence as well as horrible inhumanity.  More than two decades later, in February 2022, he proved that his infinite barbarism knows no bounds, and that his lack of self-control could become suicidal.

His illegal war on Ukraine is only the first salvo in his relentless and uncompromising quest to establish a new world order.  According to numerous statements by President Putin and his Foreign Minister Lavrov, Russia’s illegal invasion of Ukraine has been designed to put an end to the US-dominated international regime:  “Our special military operation is meant to put an end to the unabashed expansion [of NATO] and the unabashed drive towards full domination by the US and its Western subjects on the world stage,” did the latter intone on Rossiya 24 news channel.  Moreover:  “This domination is built on gross violations of international law and under some rules, which they are now hyping so much and which they make up on a case-by-case basis.”  Finally, he blasted the European Union’s foreign policy commissioner Josep Borrell thus:  “When a diplomatic chief …says a certain conflict can only be resolved through military action…Well, it must be something personal.  He either misspoke or spoke without thinking, making statements that nobody asked him to make.  But it’s an outrageous remark.”  In closing, he assured his interviewer that Russia wants a negotiated peace with Ukraine.

What hypocrisy?  What outrage? What lies?  Starting with the Kremlin’s declared objectives when the illegal invasion begun to “DeNazify” and to “teach Kyiv’s drug edicts” to implement the Minsk agreements signed in 2014 and 2015 respectively, and concluding with the demand that Kyiv recognize the illegal annexation of the Crimea as well as the fraudulent independence of the Donbass republics in Donetsk and Luhansk, the Kremlin has incessantly upped the ante against Ukraine.  Most recently, President Putin has demanded that Kyiv officially declare itself a neutral country that will never join NATO and the European Union.

Clearly, President Putin’s goals are unattainable by peaceful means.  His stated intention to reestablish the Soviet Union and beyond means wars that will rapidly multiply without ends in sight.  Moreover, these wars will become so lengthy, so bloody and so costly, that they will surely destroy Russia and at least the neighboring countries.  Finally, the attacks on the well established principles of international law, humanitarianism and reason, will elevate brute force and unlimited violence to the supreme principle of international relations. What President Putin really demands is the complete barbarization of the world through ubiquitous militarization.  This demand, however, demonstrates that he lacks even a modicum of educated intellect to comprehend the realities of world politics.  Most importantly, he is absolutely oblivious to the fact that wars for the sake of mindless destruction and which never end will lose their political efficacy.  The world cannot allow itself to be led by a barbarian with sub-intelligence to total annihilation.  Shockingly, the Biden administration has chosen from the beginning of the war Obama’s “leading from behind” approach.  Personally, President Biden is mentally unfit to lead anything.  He is a failed president who belongs to a mental institution rather than in the White House.  In the presidency, his shuffling connotes stagnation and even walking backwards.  In politics, this kind of glaring weakness exposes a politician to assault.  Ignoring President Putin’s grand design will result in worldwide catastrophe.  Unless Congress realizes that the world is at a crossroads and forces him to change course, the world will perish.  The United States of America cannot be wrong a second time.  For these reasons, if the United States of America will not lead the world and do not unite against President Putin’s barbarism, the Ukrainian genocide will become the beginning of the end for human civilization on this earth.