“You and I have a rendezvous with destiny” 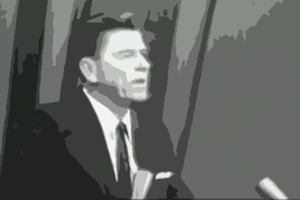 Almost fifty years ago on October 27, 1964, Ronald Reagan delivered a televised address on behalf of the Goldwater Presidential Campaign. So effective was it, it has become known as “The Speech.”

Reagan concludes with these inspiring words, “You and I have a rendezvous with destiny. We’ll preserve for our children this, the last best hope of man on earth, or we’ll sentence them to take the last step into a thousand years of darkness.”

Click here for the full transcript of this seminal address.

Well I think it’s time we ask ourselves if we still know the freedoms that were intended for us by the Founding Fathers. . . .

This is the issue of this election: Whether we believe in our capacity for self-government or whether we abandon the American revolution and confess that a little intellectual elite in a far-distant capitol can plan our lives for us better than we can plan them ourselves. . . .

Well, I, for one, resent it when a representative of the people refers to you and me, the free men and women of this country, as “the masses.” This is a term we haven’t applied to ourselves in America. But beyond that, “the full power of centralized government”—this was the very thing the Founding Fathers sought to minimize. They knew that governments don’t control things. A government can’t control the economy without controlling people. And they know when a government sets out to do that, it must use force and coercion to achieve its purpose. They also knew, those Founding Fathers, that outside of its legitimate functions, government does nothing as well or as economically as the private sector of the economy. . . .

No government ever voluntarily reduces itself in size. So governments’ programs, once launched, never disappear. Actually, a government bureau is the nearest thing to eternal life we’ll ever see on this earth. . . .

Those who would trade our freedom for the soup kitchen of the welfare state have told us they have a utopian solution of peace without victory. They call their policy “accommodation.” And they say if we’ll only avoid any direct confrontation with the enemy, he’ll forget his evil ways and learn to love us. All who oppose them are indicted as warmongers. They say we offer simple answers to complex problems. Well, perhaps there is a simple answer—not an easy answer—but simple: If you and I have the courage to tell our elected officials that we want our national policy based on what we know in our hearts is morally right.

We cannot buy our security, our freedom from the threat of the bomb by committing an immorality so great as saying to a billion human beings now enslaved behind the Iron Curtain, “Give up your dreams of freedom because to save our own skins, we’re willing to make a deal with your slave masters.” Alexander Hamilton said, “A nation which can prefer disgrace to danger is prepared for a master, and deserves one.” Now let’s set the record straight. There’s no argument over the choice between peace and war, but there’s only one guaranteed way you can have peace—and you can have it in the next second—surrender. . . .

You and I know and do not believe that life is so dear and peace so sweet as to be purchased at the price of chains and slavery. If nothing in life is worth dying for, when did this begin—just in the face of this enemy? Or should Moses have told the children of Israel to live in slavery under the pharaohs? Should Christ have refused the cross? Should the patriots at Concord Bridge have thrown down their guns and refused to fire the shot heard ’round the world? The martyrs of history were not fools, and our honored dead who gave their lives to stop the advance of the Nazis didn’t die in vain. Where, then, is the road to peace? Well it’s a simple answer after all.

You and I have the courage to say to our enemies, “There is a price we will not pay.” “There is a point beyond which they must not advance.” And this—this is the meaning in the phrase of Barry Goldwater’s “peace through strength.” Winston Churchill said, “The destiny of man is not measured by material computations. When great forces are on the move in the world, we learn we’re spirits—not animals.” And he said, “There’s something going on in time and space, and beyond time and space, which, whether we like it or not, spells duty.”

You and I have a rendezvous with destiny.

We’ll preserve for our children this, the last best hope of man on earth, or we’ll sentence them to take the last step into a thousand years of darkness.

We will keep in mind and remember that Barry Goldwater has faith in us. He has faith that you and I have the ability and the dignity and the right to make our own decisions and determine our own destiny.

Thank you very much.