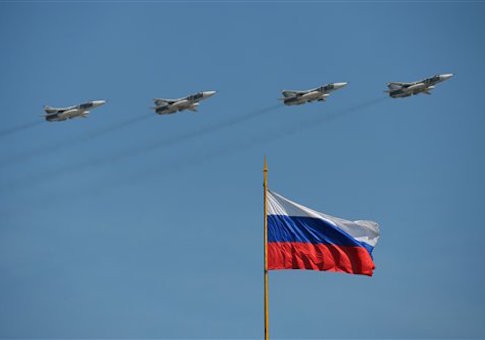 The first buzzing involved two Russian Su-24 jet fighters followed by a single Su-24 and, in a third incident, an IL-38 transport aircraft.

The passes were described by Hernandez, the Eucom spokesman, as ranging from unusually low altitude to low altitude and high speed.

“These incidents are always concerning because they could result in miscalculation or accident,” he said.

Miscalculation is a term used often by the military to describe something that could result in an unintended shootout by military forces.

The Russian aircraft operated without their electronic identifying transponders activated. Transponders on aircraft are monitored closely by air defense officers charged with protecting the ship and identifying hostile and friendly aircraft on radar.

The Russian aircraft also failed to respond to several radio requests from the Porter to halt the overflights.

The latest Russian military provocation over the Black Sea comes as the Trump administration seeks to reset relations with Moscow.

President Trump earlier this month said he respects Russian President Vladimir Putin and seemed to dismiss the former KGB officer’s use of violence against political opponents.

Hernandez did not say how close the Russian jets flew to the Porter. However, he noted that the incident was different from the April 2016 buzzing of the USS Donald Cook. That incident was captured on dramatic video of the low pass near the warship.

Instead, the only Russian bomber incursion during the exercise involved two Tu-95 nuclear-capable bombers that flew close to Japan on Jan. 24.

The buzzing of the Porter by Russian aircraft occurred in international waters of the Black Sea near Romania. The Porter was taking part in a yearly Romanian-led international military exercise called Sea Shield.

The exercise took place from Feb. 1 to Feb. 10, with the at-sea portion lasting two days. In addition to the destroyer, a P-8A maritime patrol aircraft took part.

“We’ve already strengthened our interoperability through the in-port planning phase of Sea Shield 2017, and Porter in particular is looking forward to the operational phase at sea,” said Cmdr. Andria Slough, the Porter’s commanding officer.

“Advanced exercises like Sea Shield provide us with an opportunity to work across all warfare areas, ultimately improving our combined readiness and naval capability with our Black Sea allies and partners,” she added.

The Navy said U.S. participation in the exercise “demonstrates the commitment to deploying leading technology and combat capability in support of allies and partners and collective defense of the Black Sea region.”