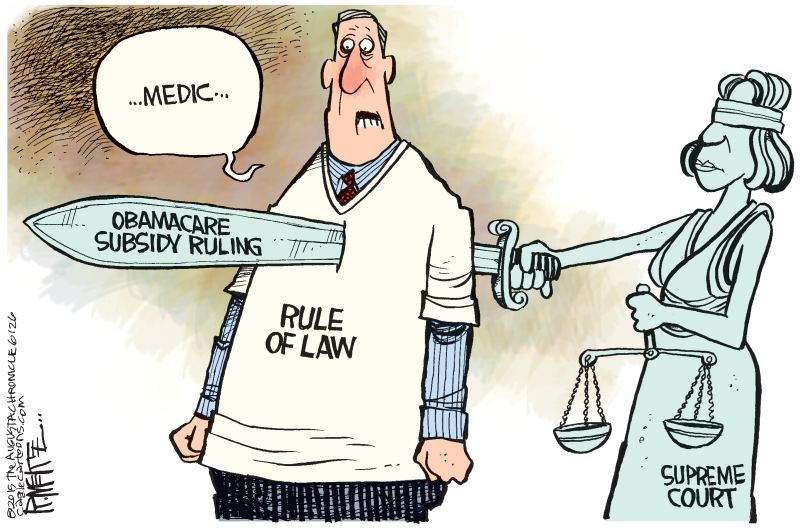 They did it again.

The Supreme Court of the United States effectively rewrote the text of Obamacare to save the legislation.

By a 6-3 majority, the Court upheld the Fourth Circuit’s decision in King v. Burwell and decided that federal subsidies were available on state Obamacare exchanges, even though the text of the so-called Affordable Care Act said that such subsidies were only available on “State” exchanges.

The majority acknowledged that the word “State” was, at best, “ambiguous.” And it rejected the idea that an executive agency, in this case the Internal Revenue Service, could decide the meaning of that term.

Rewriting the law is evidently meant for the courts, not the administration–or Congress.

The majority–led, again, by Chief Justice John Roberts, who infamously interpreted a “penalty” as a tax to uphold Obamacare’s constitutionality in 2012–held that the “context” of the word “State” mattered more than the “most natural reading.”

And the context was that Obamacare had to be saved from itself. After all, Congress could not have meant to pass a bad, self-defeating policy, could it?

The dissent, by Justice Antonin Scalia, was blistering.

If a law was badly formulated, that was not the Court’s problem, he argued. It was up to Congress to rescue the subsidies for Obamacare, not the Justices. And if people did not like it, tough: that was why the Justices were meant to serve life terms. They were meant to be above politics.

Instead, Scalia noted, the Court had adopted a particular political bent.

We should start calling this law SCOTUScare.

Perhaps the Patient Protection and Affordable Care Act will attain the enduring status of the Social Security Act or the Taft-Hartley Act; perhaps not. But this Court’s two decisions on the Act will surely be remembered through the years….And the cases will publish forever the discouraging truth that the Supreme Court of the United States favors some laws over others, and is prepared to do whatever it takes to uphold and assist its favorites.