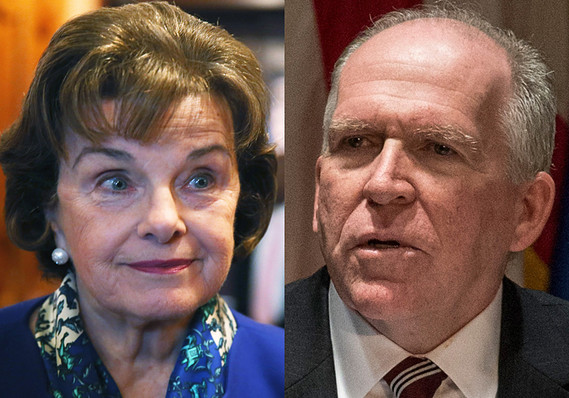 Feinstein and her staff did not interview a single CIA official involved in the interrogation program. Not one. As the senator’s Web page notes: “The committee could not conduct its own interviews because of a simultaneous DOJ investigation into the CIA’s Detention and Interrogation Program.”

That is “nonsense,” say former CIA directors Michael Hayden, George Tenet and Porter Goss, who published a response with former deputy directors John McLaughlin, Albert Calland and Stephen Kappes in the Wall Street Journal last week. They point out that Justice Department investigations were completed two years ago and “never applied to six former CIA directors and deputy directors, all of whom could have added firsthand truth to the study.”

No one on the committee spoke to John Rizzo, former chief legal officer at the CIA, or to Jose Rodriguez, who ran the interrogation program and was cleared of any wrongdoing in 2010. Not only were they not under investigation, both have also written memoirs discussing the program.

The fact that Feinstein is misleading reporters about this should be a major red flag for the media. If she can’t even tell the truth about why she failed to interview any CIA officials for their report, how can anyone trust the honesty of the report itself?

The reason Feinstein and her staff did not interview Hayden, Tenet, Goss, Rizzo, Rodriguez or any other CIA officials is the same reason Rolling Stone did not talk to those it was accusing — because they did not want to hear inconvenient facts that might undermine their predetermined narrative. As a result, Senate Democrats made numerous serious errors that call into question the credibility of their entire report. Just one example: The report claims that President George W. Bush did not know about enhanced interrogations until 2006: “According to CIA records, no CIA officer, up to and including CIA Directors George Tenet and Porter Goss, briefed the president on the specific CIA enhanced interrogation techniques before April 2006. By that time, 38 of the 39 detainees identified as having been subjected to the CIA’s enhanced interrogation techniques had already been subjected to the techniques.”

If they had bothered to ask CIA officials about this, they would have learned, as Michael Hayden told Politico magazine this week, “The president personally approved the waterboarding of Abu Zubaydah [in 2002]. It’s in his book!” Further, Bush received regular updates from the CIA on the intelligence that detainees were providing during his Presidential Daily Brief. As former vice president Dick Cheney put it Sunday on “Meet the Press”: “He authorized it, he approved it. A statement by the Senate Democrats for partisan purposes that the president didn’t know what was going on is just a flat-out lie.”

The Feinstein report is rife with similar, avoidable errors, many of which are documented in the rebuttals prepared by the CIA as well as Senate intelligence committee Republicans (who present multiple examples of “faulty analysis, serious inaccuracies, and misrepresentations of fact”). As Bob Kerrey — a former Democratic member of the Senate intelligence committee who decried “the partisan nature of this report” — explained, serious investigators interested in the truth always conduct interviews because “isolated emails, memos and transcripts can look much different when there is no context or perspective provided by those who sent, received or recorded them.”

Leveling serious charges without getting the other side of the story is unethical — at least that is what the press has been saying when Rolling Stone did it. As Post media critic Erik Wemple put it, publishing such accusations “requires every possible step to reach out and interview [the accused], including e-mails, phone calls, certified letters, FedEx letters, UPS letters and, if all of that fails, a knock on the door. No effort short of all that qualifies as journalism.” Politico columnist Roger Simon said of the Rolling Stone story, “The reporters and editors didn’t ask too many questions. Because they had too good a story,” adding “I don’t know what that is called, but it sure isn’t reporting.” Susan Miller, copy desk chief of USA Today, wrote, “A mesmerizing narrative should not supplant balance and fairness, standards editors should demand of anything they publish.”

Feinstein was so mesmerized by her narrative that she abandoned any acceptable standards of balance or fairness. She started with her conclusion, and then spent six years cherry-picking evidence to back up her claims.

That may be an acceptable standard at Rolling Stone, but it should not be for the U.S. Senate.