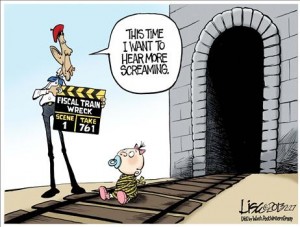 This must be disconcerting to the White House because it has been full-court pressing the issue — suddenly releasing criminals from prison, falsely claiming that teachers are being pink-slipped, holding campaign style events with President Barack Obama personally issuing overblown and false warnings that firemen and policemen and teachers will be pink-slipped, that air traffic will be at greater risk, that waiting times at airports will increase and that meat will not be inspected and may be tainted. The White House even announced that it won’t deploy an aircraft carrier to a hotspot because of sequester budget constraints.

Bob Woodward, the famous and liberal Washington Post journalist who blew the lid off of the Watergate scandal, has called the White House’s behavior “madness.” He is right.

Let’s set aside the insanity and look at the facts.

Those on the Left love to tell us that if government reduces its spending, people will suffer and do without. But the truth is, at some point, when government spending continues to grow on an unsustainable path, people will suffer and do without. Government takes the dollars it spends from current or future Americans, families and businesses. Thus, there is less money for mothers and fathers to spend on their children’s upbringing and educational needs. There is less money for businesses to hire. This is the side of the equation that the Left typically overlooks.

Second, the sequester is an idiotic way to reduce the rate of growth in federal spending. That is true not because the cuts are so drastic or large, but because the reductions are not aimed at waste, fraud or abuse. For example, the cuts at the Pentagon are not aimed at getting rid of the huge growth in its “climate research” (which is also being done by thousands of other entities around the world), or the huge and unattainable growth in civilian employees at the Pentagon. Instead, everything gets a cut. So wasteful, stupid programs that should be eliminated, are only slightly trimmed and vital worthwhile items are also cut back. That is like a family cutting back on asthma medication for their asthmatic child, rather than reducing the HBO budget.

Third, the federal government provides minimal funding for local schools, law enforcement and fire fighting. In fact, in most cases, it is almost zero. So the sequester will not result in mass firings of teachers, police, or firefighters. The Obama Administration is foolishly squandering its credibility spreading misinformation.

Fourth, the Obama Administration suggested the sequester that became law. Obama liked the sequester back in 2011 because it took debt ceiling issues off the table until after the election. Republicans agreed because they thought it would force Obama to finally agree to some modest cuts to the federal budget (actually, cuts to the rate of growth).

The Obama Administration has worked very hard to mislead the American public about who’s idea the sequester was, and about its impact. In fact, Obama himself engaged in outright falsehoods regarding the sequester. But it doesn’t stop there.

Fifth, the Obama administration is viciously attacking anyone in the media who tells the truth about what they’ve done and said. For example, Bob Woodward, has written that the sequester was Obama’s idea and Obama was now trying to move the “goalposts” on the spending cut negotiations. Rather than honestly admitting their overstatements or falsehoods, the White House is now telling journalists that they need to be careful and that they may regret taking the positions they have taken.

There is a tawdry history here. The Obama White House has consistently tried to cow and delegitimize journalists who are viewed as insufficiently supportive of the Obama storyline. Despite promises to be the most open and transparent administration, this White House is the most closed and most adversarial White House since Nixon. In fact, the Obama administration appears to surpass the Nixon Administration in terms of sheer paranoia and a demonstrated desire to control the media and force it to deliver the government approved storyline.

With those five truths in mind, I do not like the sequester. It is a stupid way to cut a budget on several different levels. On the one hand, it is not large enough. We must reduce spending to 2007 levels at a bare minimum. It is not enough to simply slightly reduce the rate of future growth. On the other hand, the sequester cuts the wrong things. It treats all spending the same. So wasteful spending is cut no more than vital spending. That is stupid.

If I were to make cuts in the Pentagon’s budget, I would not reduce spending aimed at making sure that our fighting men and women have the best possible equipment and tools. I would not reduce care for wounded veterans. But I would strip out all the crazy projects that were shoe-horned into the DOD budget during the height of the war on terror because that was a popular budgetary cause at the time and even crazy stuff could slip by without much review. As a result, the civilian workforce at the Pentagon has exploded in the last decade. Likewise, things like additional climate research have been crammed into the Pentagon’s budget when other agencies already do that and hundreds of universities and scientists get government funding to do the same research.

I want a robust military that can defend America and Americans from a wide-variety of threats and dangers. But we should fund real military priorities, not an ever-growing army of civilian employees, primary and secondary military schools that cost $50,000 per child, or non-military research that also happens to be redundant of other federal programs — such as climate science research, and breast and prostate cancer research.

The sequester is bad because it doesn’t make large enough cuts to federal spending and to the extent that it makes cuts at all, it cuts the wrong things. The House has passed two bills that solve at least part of this problem. But the Senate won’t even consider them and President Obama will veto them. Obama demands more tax increases before he’ll agree to stop the sequester and acts as if it is the House Republicans who are playing politics. Woodward was right, Obama is exhibiting a “kind of madness I haven’t seen in a long time.”