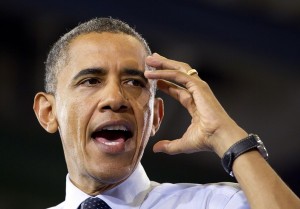 In his Jan. 24, 2011 column E.J. Dionne asks if Pres. Obama should retreat or spend the next two years consolidating the gains Obama has made. My question is what gains has Obama made? Passing a bill that a majority of our country doesn’t want, that was passed before it was written, and one that barely got bi-partisan support is not much of gain. Or is Dionne talking about the gains Obama made in getting Democrats elected to Congress and the state legislatures? The idea that Obama has any gains to consolidate is wishful thinking at best and delusional at worst.

Dionne quotes a poll of Americans who believe Obama is a moderate. Obama is not a moderate. This poll of Obama’s approval ratings, an NBC News-Wall Street Journal poll is not an accurate poll of public opinion. First it was conducted of people who only have a cell phone and do not have a land line. About 20% of all Americans only use a cell phone. Most of the 20% are between the ages of 18 to 29 years old. This age bracket voted for Obama with an unusually high turnout in 2008. These factors make the poll a biased…reflection of what the American public thinks. (For the record I am one of the 20% who only have a cell phone, but I’m not in the 18 to 29 age group.) Second of the respondents 42% of them voted for Obama, 29% voted for McCain, 5% voted for someone else, 5% couldn’t remember if they voted, and 19% didn’t vote in the presidential election of 2008. Is it any wonder that this poll found Americans who believe that Obama is a moderate?

The idea that Obama’s approval ratings are improving is part of what liberal commentators like Dionne want the public to believe. Using a biased poll or saying that there was dissatisfaction with the 111th Congress for not raising taxes is his desperate attempt to portray Obama as a moderate. The media sold Obama as a moderate before the 2008 election but Obama’s actions have shown that the media lied. Obama is a moderate and our country isn’t running a deficit that is over $14,000,000,000,000.

The newly elected majority of Republicans in the House did exactly what they were elected to do, repeal an un-Constitutional bill, the Affordable Care Act. Only liberals would think that the repeal of an un-Constitutional bill with nothing to replace it is a negative action. There is no need to replace the un-Constitutional Affordable Care Act! That it violates our Constitution, will not work as intended, and creates a larger bureaucracy that is larger than the entire British government our Founding Fathers fought our revolution to get rid of are reasons to thank the Republicans not to castigate them.

Our government now has a deficit that is over $14,000,000,000,000. When our deficit is bigger than our income it is time to get the biggest axe we can find and start chopping away at the size of our government. Every single government program needs to be cut to the bone if not totally eliminated!

If Obama wants to battle the GOP to save any government program from drastic cuts he will be committing political suicide. The idea that any cuts in any government can be anything but drastic is not a sign of fiscal responsibility. The route to long-term financial balance, to long-term financial health is to enact deep across the board budget cuts. We need real budgets cuts, where the budget is less than it was the year before, not a Beltway budget cut where the amount of the budget increase is less than the rate of inflation. To achieve long-term financial health it is time for the Democrats to agree with the Republicans to start drastically cutting the budget. When the Democrats agree with the Republicans to cut the budget and reduce the size of our government then, and only then, will there robust growth and job creation.

Job creation will start to happen when the government shrinks! For that to happen America’s manufacturers will have to become competitive again. To compete means lower wages. As unpalatable as lower wages are they bring lower prices which increases demand and that will create jobs. Companies move to Mexico or other countries not because of tax breaks for moving but because of the lower pay workers in those countries get. When anything becomes too expensive the demand for it drops. Whether that is a skilled worker, a gallon of gas, or a new washer and dryer if it costs too much the demand for it drops.

Nor is Social Security off the table from being cut. Social Security is nothing more than a promise to use the taxes of those currently working to pay the benefits promised to the retired. That promise to current and future retirees, the Baby Boomers, is an unfunded IOU of over $106,800,000,000,000. To make good on that IOU the FICA taxes anyone still lucky enough to have a job will have to double if not triple. That means that the FICA (Social Security) tax will go from 12.4% to 37.2% of your paycheck. Then the employees federal, state, and if they have it local taxes will be deducted from their paycheck. That will put almost everyone in the 50 to 70% tax brackets.

Those who work in Washington, D.C. lost contact with reality years, if not decades, ago. The belief that taxes can be raised at will for spending programs designed and created to get members of Congress reelected has got to stop. What we need is bipartisan work to drastically cut spending.

If Obama wants to move to the center, if he wants to get reelected then he had best lead the way in the bipartisan efforts for real budget cuts. If he wants to be a moderate he will have to have the courage to tell the radical left, including the liberal media, that our country can no longer spend money it does not have. He will have to drastically cut the every single government program. Nothing is exempt, nothing is off the table, nothing is too vital not to be cut and when I say nothing I include the budget of the Defense Department. There are no sacred cows anymore. We can’t afford them!