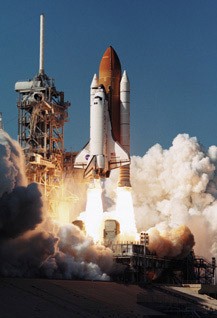 The once great American space program is on life support. We now pay the Russians $65 million per seat to take our astronauts to and from the space station. And the Obama Administration’s unimaginative and amateurish vision for space exploration — even if successful — will not revive the dying program. It merely follows the disturbing pattern of the Solyndra scandal, funneling tax dollars to Obama donors and fundraisers.

With the recent successful test of SpaceX’s low-Earth-orbit vehicle, the space program got some much need positive press, but sadly no results that change the death watch. SpaceX is a long way away — perhaps a decade or more based on the substantial delays to date — from being able to safely carry humans to and from the space station.

However, whether the space station will be in service in a decade is not clear. So we may be paying top dollar for the development something we will never use. In the mean time, we continue to rely on Russia. Even if SpaceX can eventually safely carry astronauts to the space station, it will not constitute a serious space exploration program. The space station is in low-Earth orbit and we cannot explore space or even the moon if we cannot travel beyond low-Earth orbit. The challenges of space exploration require a vastly different capability than SpaceX is trying to develop.

Since President John Kennedy energized the nation with the mission to put a man on the moon, NASA had always been about big ideas in space exploration, not politics. But this changed in 2010. NASA largely abandoned any serious goal to explore space when the White House directed NASA to concentrate on Earth-based projects like researching climate science which simply replicates the research being done by thousands of other institutions, universities and scientists. While NASA has a space exploration program on paper, its vision is unfocused and its funding is raided to support small-idea projects that are not worthy of NASA’s proud tradition.

There has been a lot of baseless talk that SpaceX’s contract is a great example of a market based approach to space and a lot of even sillier talk that it will save taxpayers money. But the SpaceX deal is no more a free market approach to space exploration than the subsidized loans to Solyndra were a free market approach to green energy. And there may be no savings to the taxpayer. (Solyndra was, of course, a solar panel company that received about $500 million in taxpayer subsidized loans despite the fact that it was headed for bankruptcy. Even more troubling, Solyndra insiders were big-time Obama donors.)

During the Bush Administration, NASA picked a few space companies, including SpaceX, to work on replacing the Shuttle’s capacity to bring people and cargo to and from the space station. Sadly, during the Obama Administration, NASA threw hundreds of millions more at these companies without asking them to accomplish anything more.  NASA claims that these companies will “compete” with each other. But with only two trips per year to the space station scheduled over the next decade, it is unclear how these companies can profitably “compete.” This is what will likely happen — the taxpayer will provide massive funding to several companies to build the same thing and in the end there will not be enough work for the companies to compete over.

There is nothing free market about SpaceX’s contract. If it were a free market agreement, SpaceX would spend its own money to develop its product and then compete with other providers to sell its product. But SpaceX’s research and development is largely funded by taxpayers. The real kicker is that if, and when, SpaceX’s development is complete, NASA will not own the technology, SpaceX will own it. What exactly is NASA buying?

When the government buys pens, paper, computers and thousands of other products, it contracts on the open market to get the best price for its needs from among many competitors. The government doesn’t pay for the costs of development for these products. It just buys the finished product. But in some cases, because of the expense, complexity, uncertainty, and unlikely future commercial income stream associated with certain purchases, the government must play a role in the development of new and far-reaching technologies. For example, when purchasing manned flight to the moon, designing the space shuttle, or a high-tech supersonic stealth fighter jet, the marketplace doesn’t have completed products sitting on a store shelf or in a warehouse waiting to be purchased. In these cases, we have a highly developed set of government contracting rules that require accountability and transparency and which are designed to ensure that the government achieves the desired results in a timely fashion and at a reasonable cost. That is how we got to the moon, and built the shuttle, the space station, and most of our world-leading high-tech military technology.

But that is not the process NASA used with SpaceX. Instead, SpaceX collects tax dollars so that it can learn how to build and develop something that other companies were doing a generation ago. It is curious that SpaceX is now receiving so much taxpayer cash given its stunningly thin record of success in space. And it is even more troubling given that SpaceX’s founder and CEO is a big-time Obama donor. This is starting to sound like another Solyndra where friends of the administration get unsustainable sweetheart deals at taxpayer expense.

Sadly, however, the problem with how the Obama Administration is pursuing its uninspiring and unimaginative space program goals goes well beyond picking donors to receive favorable contracts and guaranteed government cash with little accountability. Even if SpaceX accomplishes everything asked of it, it will not get us beyond low-Earth orbit. Simply stated, the Obama administration’s vision for space exploration is essentially to replace the hauling capability of the shuttle — something that was developed more than 30 years ago. Beyond that, real space exploration is not a serious priority.

Sadly, NASA is transitioning from being a highly respected nonpartisan space exploration agency to just another arm of Obama’s political operation — wasting tax dollars on friends, diminishing America’s global leadership in space exploration, and ensuring that if we continue down this path, we will fall behind China, Russia, India, and others. This will have dire implications for our economy and national security. The Administration has been asked to correct course, but so far has refused to act. Hopefully, Congress will step in and rescue us from this amateurish, shortsighted and damaging lack of leadership and vision.