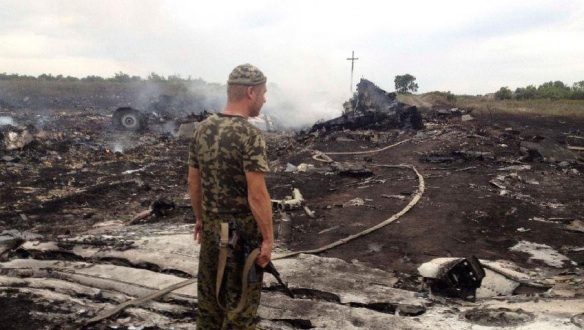 All the currently known evidence points to the culprits being the very forces that Russian President Putin has armed, trained, and encouraged.

Malaysian Airlines flight MH17 departed from Amsterdam to Kuala Lumpur at 11:14 am GMT with 298 people on board, including 15 crew members. At 2:15 GMT the flight lost contact and disappeared from the radar as it flew over Ukrainian airspace. Shortly thereafter, it crashed north of Torez, next to the village of Chomukhine, Luhansk Oblast, some fifty miles northwest of Donetsk, and about twenty-five miles of the Russian border.

At 4:40 pm Kyiv time, approximately twenty minutes after the crash, a telephone call was intercepted by the Ukrainian Security Agency (Ukrainian acronyms SBU) between a Russian military intelligence officer and leading commander of the self-proclaimed Donetsk People’s Republic, whose first name is Igor, but goes by three last names, Bezler, Strekov and Gurkin respectively, to a colonel in the main intelligence department of the general headquarters of the armed forces of the Russian Federation, Vasiliy Geranin. During the conversation Bezler reported that “We have just shot down a plane. Group Minera. It fell down in Yenakievo.” In a second intercepted conversation between two individuals designated as “Major” and “Greek” respectively, the latter states that “It is hundred percent a passenger (civilian) aircraft.” In a third intercepted conversation, a Cossack commander named Nikolay Kozitsin muses about the possibility that “they wanted to bring some spies to us.”

The destruction of the Malaysian Boeing 777 was preceded by the shooting down of a Ukrainian Antonov 26 transport plane on Monday and the downing of a Suchoy 75 fighter jet belonging to the Ukrainian air force on Wednesday. All three aircrafts were flying well above the range of any shoulder-launched or man-portable missile. Indeed, the Malaysian civilian aircraft was cruising at an altitude of thirty three thousand feet. Clearly, all three aircraft were destroyed by either the SA11 or the SA20 variant of the Russian air defense missile system, manufactured by the Almaz-Antey concern. These systems are highly sophisticated and require prolonged education, training and coordination. Since the so-called pro-Russian rebels are mostly uneducated thugs and criminals, the probability that they were able to operate these complex weapon systems is zero.

President Putin’s reaction to this barbaric act was predictable. Following the script of the Soviet Politburo in 1983, when the Kremlin vehemently denied the destruction of the Korean Airlines flight 007 by its own air force, he put the blame squarely and unashamedly on Ukraine. Adding insult to injury, he opined that the sole responsibility for the war in eastern Ukraine lies with the government in Kiev. While blaming the victim and forgetting to mention his overwhelming responsibility for fomenting civil war and instability, he complained about Ukrainian air superiority that has damaged the military position of Russia’s vassals around Donetsk. His primary concern is not for the innocent victims of a barbaric act committed by his military, but for the geopolitical dimensions of his destructive foreign policy. As the Soviet Union before 1990, the current reincarnation of the Evil Empire can only spread ruin and destruction rooted in centuries-old moral corruption.

In Putin’s worldview, there is no regard for human life, universal moral values, the rule of law, adherence to international obligations, and responsible political conduct. Clearly, the root of all problems in and around the territories of the former Soviet Union is Putin’s false sense of Russian sovereignty and, stemming from it, his misguided pride, irrational arrogance, and megalomaniac presumptions. His claim to every inch of land that was ever inhabited by people, deemed by him as Russians, is as preposterous as it is dangerous and absurd. His ultimate objective is a world totally subjugated to the barbaric and uncivilized rule of Russia. That is why the Soviet-style behavior of President Putin is beyond the comprehension of the civilized world and of individuals and nations whose ethos is freedom, moral values, truth, justice, and respect for human right.

The United States of America is exceptional, for its goal is a world in which freedom and peace rule for the benefit of all. The great threats to this noble vision are the rebirth of communism and the spread of terrorism. In every sense, both are the vehicles of destructive, permanent revolutions. The United States’ and its allies’ and friends’ response shall be united and unequivocal. They must speak with one voice to Vladimir Putin and should not argue among themselves about shades of differences. The entire world must be united in its righteous outrage and its firm condemnation of Russia’s foreign policy and its brutal actions. The war on Georgia, the illegal annexation of the Crimea, the promotion of civil war in Ukraine, and the recent heinous act of terrorism against a defenseless civilian aircraft must be condemned and sanctioned. In the 21th century, there is no room for bullies, thugs and terrorists. Let us once again assume our rightful place among the nations of the world and lead mankind toward a peaceful and prosperous future.