Freedom Centers Constitutional and Political Freedom State of the Union: A Shakespearean drama ...

State of the Union: A Shakespearean drama

The President answers his white-shirted enemies 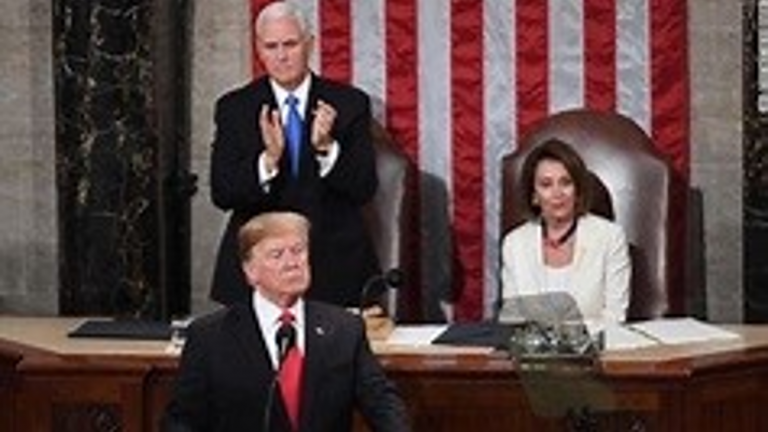 The 2020 State of the Union address had all the elements of a Shakespearean drama. The setting was filled with tension and made for television. The primary picture showed the hero flanked on his right by his loyal acolyte, Vice President Mike Pence, and on the left by his archenemy, the little old lady of the Left, Nancy Pelosi, as he eloquently, at times even poetically, told America what he had accomplished with the responsibility the voters had given him while his enemies had been trying to destroy his presidency.

And it was quite a list! He has enhanced every facet of America’s welfare – from repatriating American manufacturing for both economic and national security reasons, to job creation, trade treaties, rebuilding the military, upgrading veterans’ health care, protecting our borders, to encouraging respect for the law enforcement community, protection of the right to bear arms, to the right to life of the unborn, the rights of parents to choose the education of their own children, to the fight against opioid addiction, human trafficking, and many more  issues.

Half the room went wild – while the other half sat stoically on their hands, grim-faced and cold-hearted. They were represented symbolically by the action of the little old lady of the Left, as she sat in full view of the audience and the camera. Watching her was fascinating. Most of the time, she sat there with a slight scowl on her face, occasionally shaking her head at some statement by the speaker. Her torture had started when the President ignored her out-stretched hand after he handed her a copy of the speech. (One could hardly blame him for refusing to shake the hand which has tried to kill his office, his reputation, the rest of his life.)  He was not going to forgive and forget this sworn enemy.

After that, she steadfastly avoided standing to applaud each remarkable achievement being noted, frequently squirming, sometimes trying to get Mr. Pence’s attention – which was also ignored.

Then came the salutes by Mr. Trump to a series of individuals. First, she hesitated; then she realized that she was not against these heroic people; so, she jumped up and applauded. Thereafter, she could be seen each time trying to decide whether to join the room or not.

One “not” was the President’s attention to a two-year-old child who had been the first survivor of a premature birth at 21 weeks. A poignant moment not shared by Grandmother Pelosi.

In the end, she stood and ceremoniously tore her copy of the speech in half in full view of the camera — and the nation. A fitting end by a hateful woman toward this hated man.

Indeed, the most impressive feature of the entire Democrat party in that hall last night was the tangible hatred demonstrated toward the President and all he stands for — and, by extension, all those people who stand with him.

This attitude was crystalized by the President’s attention to Rush Limbaugh, who was sitting in the gallery next to First Lady, Melanie Trump. Limbaugh announced last Monday that he has been diagnosed with stage 4 lung cancer.

When Mr. Trump announced the presentation to Mr. Limbaugh of the Presidential Medal of Freedom to the popular, but visibly astonished, 69-year-old broadcast pioneer, some of the Democrats started shouting, “No! No!” Their hatred might be understood since the younger ones were raised by liberal parents who considered Rush Limbaugh the archenemy of all that was sacred to them. But there is no denying that he is the most listened-to radio host of all time and the “father” of a whole new genre called “conservative talk show hosts” (of which this writer is one). It was not the time or place to demonstrate against this stricken giant.

In all, the 2020 State of the Union speech by President Donald John Trump was perhaps the most riveting, dramatic and exciting speech of its kind in recent memory, if not in American history.

Postscript: In the ultimate irony, the first Democrat response featured the Governor of Michigan, whose theme was that the Dems get things done, while the Republicans just talk. After 75 minutes of listening to the President give us a list of “promises kept” which may be the longest and most comprehensive list of actions by any president in American history in contrast to the “Do-Nothing” Democrats. She exemplified the fact that the Dems simply cannot seem to hear anything this President says.