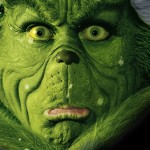 One of the most outrageous examples happened a few years ago. Dan Barker, the Co-president of the Freedom From Religion Foundation (based in Wisconsin) traveled to Olympia, Washington to post an anti-Christmas sign next to a nativity display at the state capitol. For the record, there is also a Menorah on display and a large “Holiday Tree” which is part of a local business’ charitable effort to benefit poor children. Barker dismissed the idea that his sign was merely another religious display. He said, “It is not a religious display. It is an attack on religion.”  END_OF_DOCUMENT_TOKEN_TO_BE_REPLACED