“The Colonists have been branded with the odious names of traitors and rebels only for complaining of their grievances. How long such treatment will or ought to be borne, is submitted.” (November 1772) 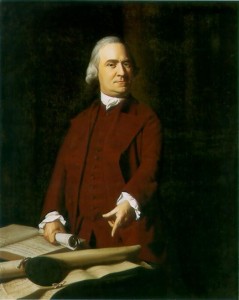 In 1772 Samuel Adams drafted this declaration of the rights of the colonists. Written four years prior to the Declaration of Independence, it outlines the rights colonists believed was their due as men, as Christians, and as subjects of the British Crown. Adams, founding member of the Sons of Liberty, was second cousin of future-President John Adams.

I. Natural Rights of the Colonists as Men.

Among the natural rights of the Colonists are these: First, a right to life; Secondly, to liberty; Thirdly, to property; together with the right to support and defend them in the best manner they can. These are evident branches of, rather than deductions from, the duty of self-preservation, commonly called the first law of nature. END_OF_DOCUMENT_TOKEN_TO_BE_REPLACED