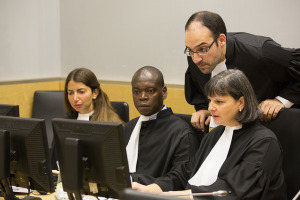 Last week we noted International Criminal Court Prosecutor Fatou Bensouda’s much-hailed rejection of a pre-trial chamber’s request that she reconsider her decision not to pursue a case against Israel regarding the Mavi Marmara raid looked more like a behind the scenes power struggle at the Hague than a selfless act of blind justice from a woman incapable of admitting error or submitting herself to the sort of accountability she would like to impose on others.

Likely as not, Bensouda couldn’t stand being publicly second guessed by a gaggle of robes she expects to do her bidding.

At any rate, this morning comes news of more chaos at the Court, as the Appeals Chamber reverses the decision of its Trial Chamber not to refer Kenya to the ICC’s membership over the nation’s failure to heed prosecution requests in its abandoned, “very, very amateur” prosecution of President Uhuru Kenyatta.

END_OF_DOCUMENT_TOKEN_TO_BE_REPLACED

Standing Up for Israel at the ICC

The European Centre for Law and Justice (ECLJ) has submitted an amicus brief to the Appeals Chamber of the International Criminal Court defending the decision of the Court’s lead prosecutor not to heed a trio of judges’ naked politics-not-law demand that she open an investigation into the ill-fated Israeli raid of the Turkish flotilla, the Mavi Marmara. (Whether Fatou Bensouda did this out of a commitment to justice or to protect her hard-won power/turf is, of course, open to question.)

Read the full brief at this location. Here is a bit of the condensed reasoning from the press release:

[W]e have argued that the ICC does not have jurisdiction over Israel or Israeli forces at all because Israel is not a party to the Rome Statute, the treaty that created the ICC. A treaty (an agreement between two more States), by its very nature, binds only parties that agree to be bound by its terms. Under customary international law, the terms of a treaty cannot be forced on non-parties. This is a basic principle of international law. As such, we have argued that the Rome Statute does not bind Israel and cannot be applied against Israel. Yet, it appears that the politics of the Israeli-Palestinian conflict have influenced the Pre-Trial Chamber’s decision.

Our brief urges the Appeals Chamber to review and decide this critical case appropriately, according to the applicable law, not anti-Israel bias.

More info on the group’s fight against the ever-creeping “lawfare” menace here.

“We will not stand by as our ally is undermined on the world stage,” Jay Sekulow, a chief counsel of the American Center for Law and Justice who has successfully presented an oral argument to the ICC lead prosecutor in the past, writes. “The stakes couldn’t be higher.”