Late one Friday afternoon, the Obama Administration announced its plans to cut the Internet loose from U.S. government oversight, giving control to the Internet Corporation for Assigned Names and Numbers (ICANN), a private corporation created by the U.S. to manage the web. Since then both ICANN and the administration have gone to great pains to explain that the change would have little practical effect, be largely benign, and that the current U.S. role would not be taken over by other governments like China, Russia, Iran, or the European Union. Sadly, however, these assurances are the Internet equivalent of “If you like the health insurance plan you have now, you can keep it. Period.”

Most Americans know the Internet won’t improve if dictators from around the world are given a bigger role in its governance. Many countries — even those not run by dictators — have engaged in censorship, silenced dissent, and selectively shut the Internet down for authoritarian political reasons. END_OF_DOCUMENT_TOKEN_TO_BE_REPLACED 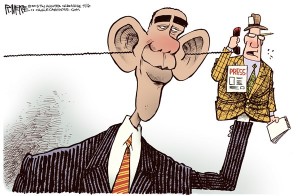 The press-punishing, speech-chilling, and unabashedly overreaching actions by the Obama administration against the Associated Press and Fox News Channel’s James Rosen lay bare the essential dynamic between any president and a press that is always more prone to being lapdogs than watchdogs: the president feeds or punishes them as he sees fit, while chanting a bogus rosary about “national security.” END_OF_DOCUMENT_TOKEN_TO_BE_REPLACED