Poll: More Americans Have a Gun in Home Than Ever Before

A new poll published on Thursday found more Americans report having a gun in their home than ever before.

The Wall Street Journal/NBC News survey of 1,200 adults found 48 percent of Americans said they or somebody else in their household owned a gun. That’s 3 percentage points higher than when the same question was asked last year. It’s 9 percentage points higher than when the question was asked in 2011, the low point of the poll’s findings for self-reported gun ownership.

The United States Census Bureau estimates there are 249,454,440 adults currently living in America. If the Wall Street Journal/NBC News survey is accurate, that equates to 119,738,131 Americans with a gun in their home. END_OF_DOCUMENT_TOKEN_TO_BE_REPLACED 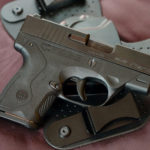 Governor Chris Sununu (R., N.H.) signed the legislation that allows anyone in New Hampshire to legally carry a gun so long as they are legally allowed to possess a gun. The measure removes the permitting process that had previously been required for gun carry.