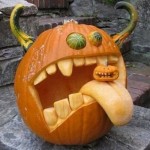 How scary are your jack-o’-lanterns? Scarier than you think, according to the Energy Department, which claims the holiday squash is responsible for unleashing greenhouse gases into the atmosphere.

Most of the 1.3 billion pounds of pumpkins produced in the U.S. end up in the trash, says the Energy Department’s website, becoming part of the “more than 254 million tons of municipal solid waste (MSW) produced in the United States every year.”

Municipal solid waste decomposes into methane, “a harmful greenhouse gas that plays a part in climate change, with more than 20 times the warming effect of carbon dioxide,” Energy says. END_OF_DOCUMENT_TOKEN_TO_BE_REPLACED