Freedom Centers Science and Public Policy The Assault on Science ...

The Assault on Science

Recently, the attorneys general of a number of states have launched an effort to use the RICO anti–​organized-crime statute to prosecute opponents of climate-change alarmism. This is nothing less than an all-out attack on science.

There are several vital issues involved here, involving not only substance, but, even more important, process. Let’s start with the latter.

Science is not a collection of facts; it is a process of discovery. Science, alongside its sister, conscience, is based on the signature Western individualist belief that there is a fundamental property of the human mind that, when presented with sufficient information, is able to distinguish right from wrong, justice from injustice, truth from untruth. Matters of science must therefore be determined by reason, not by force. To attempt to prevail in a scientific dispute through the use of force is equivalent to the use of a gun to prevail in a courtroom, or, for that matter, of rape to prevail in courtship. It is nothing less than a criminal rejection of a basic principle of our civilization.

It is also prima facie evidence that the case requiring such enforcement is severely defective. No valid scientific theory has ever required the use of police powers to prevail. No Ptolemaist was ever burned at the stake by Copernicans, nor did the relativity theorists ever find the need to round up the hard-core Newtonians or Etherite dead-enders. Even such counterintuitive theories as quantum mechanics and the Big Bang have done just fine without the assistance of Gestapo raids directed against their detractors. In the courtroom of science, if you have the facts on your side, you don’t need a gun — and juries would be well advised to distrust the case of those parties who choose to use weapons to silence adversarial witnesses.

The supporters of the new Inquisition say the catastrophe skeptics are wrong, and as they are spreaders of doubt of essential beliefs, their heresy requires suppression for the public good. But, as consideration of the list of successful theories in the preceding paragraph illustrates, most of the important ideas now established in science were at one time heretical, and therefore it is permission, and not suppression, of heresy that is vital to scientific progress.

That said, let us consider the substance of the inquisitors’ complaint, to wit, the undermining by skeptics of the following argument:

1. The Earth is warming.
2. This warming is caused by human industrial activity, which emits CO2.
3. This CO2-driven warming is very harmful to either humanity or wild nature or both.
4. Therefore, policies must be implemented to counter such warming.
5. The best such policies are regressive measures that increase the price of fuel, electricity, food, and other basic goods.

In making the above case, the alarmists have only one demonstrable proposition. This is the first; the Earth is indeed warming, and has been since about 1600. We know this for a fact, not from the doubtful claims of researchers who say that they can measure ongoing global temperature increases averaging 0.01 degree C per year, but from historical accounts, such as those in Dickens, which attest to snowy winters in London in the mid-19th century, or accounts of frost fairs held on the frozen Thames in the age of Cromwell. So the minority of doomsday skeptics who base their case on rejecting proposition No. 1 are indeed on weak ground.

The fallacy of the alarmists’ position is that they jump directly from scientifically demonstrable proposition No. 1 to demonstrably brutal proposition No. 5, without considering the very questionable intervening logic. This is a fallacy equivalent to maintaining that the reality of the theory of evolution, as amply demonstrated by the geologic fossil record, requires adherence to such repugnant political programs as eugenics, Social Darwinism, or National Social Darwinism (i.e., Nazism) — as indeed all these movements actually did. So let’s look at the argument a bit more closely.

Proposition No. 1 is true. Proposition No. 2 might be true, but is not demonstrable. The atmosphere of the Earth has been enriched over the past century from 300 parts per million CO2 to 400 parts per million, a rate which is consistent with human fossil-fuel use, and this could cause a temperature rise in the range of what we see. However, there are other industrial gas emissions that are global cooling agents, and the observed warming began long before human industrial activity was sufficiently large to be a credible agent of climate change. But let’s stipulate No. 2 as being true, regardless.

We then come to Proposition No. 3, which is manifestly false. Indeed, contrary to the claims of the anti-carbon crusaders, both the CO2 enrichment of the atmosphere and the global warming that it may have caused have been greatly beneficial to both humankind and wild nature. Based on the theory of photosynthesis — which is as widely accepted as that of the round Earth — the enrichment of the CO2 content of the atmosphere should accelerate plant growth, and such quickening has indeed been repeatedly measured in many studies, in the lab, in the field, and from orbit. Furthermore, the warming that has occurred over the past century has had the further useful roles of increasing net global rainfall and of lengthening the growing season, as shown, for example, by this map, published by the EPA. 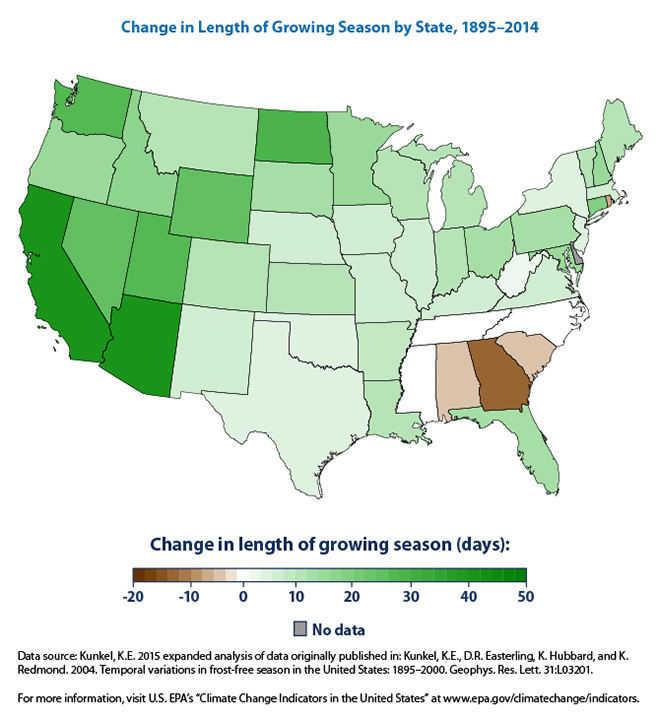 Lacking scientific honesty, the alarmists almost never choose to mention these inconvenient truths. Instead they seek to make doomsday predictions based on the theory that global warming must necessarily cause a disastrous flood. But this prediction is also clearly unsound, as shown by the fact that despite four centuries of global warming, no prominent port city of the early modern era in now underwater. For example, here is a map of Boston, comparing its coastline in 1630 to that today. It can be seen that the Pilgrims’ famous City on a Hill has actually increased its land area since its founding, and while some of this increase is due to landfilling activity, there is no evidence, either in Boston, New York, Philadelphia, Baltimore, Charleston, or any other American colonial city, of a general coastal retreat in the face of an advancing ocean. 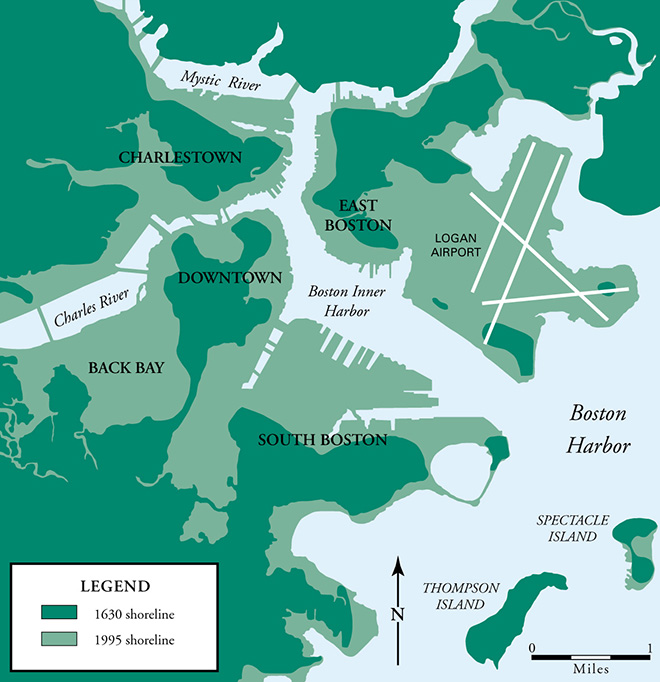 Moving on, if Proposition No. 3 is false, then Proposition No. 4 must be as well. In that case, Proposition No. 5 has no rational basis, unless one were to claim that, despite the falsity of the entire supporting climatist argument, making fossil fuels and their products less available to humanity is a valid goal in and of itself. Let us consider this possibility.

Here is a graph comparing average global per capita income, in inflation-adjusted 2010 dollars, to total human carbon use. It can be seen that average human well-being has risen in direct proposition to carbon utilization, with a tenfold increase, from $900/year to $9,000/year in just the past century. In secular terms, this is the greatest story ever told, but it still has a long way to go. The average American income is $45,000 per year, and we still have some poverty here. To raise the world average to anything like our current level would require multiplying global carbon use several times over. Restricting carbon availability to what it is now, or even worse, rolling it back, would require keeping billions of people in crushing poverty, or returning them to it. Such a policy is not moral. 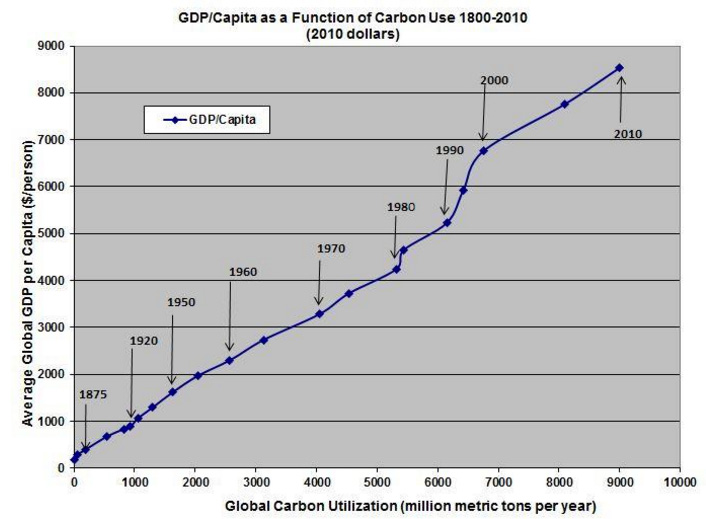 So it is not the doomsday skeptics, but the carbon-benefit deniers who are diverting the public with potentially catastrophic misinformation.

This is not the first time the authority of scientific orthodoxy has been abused for reactionary purposes. As noted above, eugenics, Social Darwinism, and National Social Darwinism all sought justification for their horrid programs in evolutionary theory. But unlike Nazi Germany, in the United States, up until now, such charlatanism has been open to challenge. In the early 20th century, for example, hundreds of thousands of poor southern whites and blacks would die every year from pellagra, or diseases made fatal by weaknesses induced by pellagra. Using enormous compendiums of data, the eugenicist establishment was able to show that in the great majority of cases, pellagra victims had others in their family or ancestry who were also pellagra victims, and that therefore pellagra must be a hereditary disease, whose necessary remedy was to allow those afflicted to die off, thereby improving our national racial stock via natural selection. In 1914, however, Dr. Joseph Goldberger of the U.S. Public Health Service showed experimentally that pellagra was a nutritional-deficiency disease, which could be readily cured by a proper diet including adequate amounts of fruits and vegetables, or alternatively, vitamin pills. These findings provoked the anger of the eugenicist establishment, but while they could slander and demean Goldberger (he was a Jew, after all, and his experimental sample was much smaller than the eugenicists’ vast storehouse of medical records), they could not block his publications, let alone lock him up. The debate of data and counter-data therefore continued, and since he was right, by the 1930s, Goldberger’s pellagra theory won the day, freeing millions of Americans from a horrible disease. But imagine what the outcome might have been had the prosecutors of the day decided to take it upon themselves to defend scientific orthodoxy by silencing the heretical Dr. Goldberger.

As outrageous as it sounds, such is the threat we currently face. The measures proposed by the climate alarmists — carbon taxes (i.e., sales taxes focused on basic goods), cap and trade (a form of carbon tax farming, even more pernicious than direct taxes), and crony capitalism (involving state-enforced direct transfer of funds extracted from the general public to the super-rich via rigged-up energy prices) — are all extremely regressive. Nevertheless, they claim that such brutal policies are necessary, as purportedly demonstrated by “scientific” authority so unimpeachable as to make contradicting it a criminal offense. But this is nonsense: Real science never fears contradiction. Rather it relishes every joust with opponents as a chance to prove its worth on the field of intellectual battle, or honorably salute the victory of a stronger challenger in the never-ending contest to advance the cause of truth. The demand by the climate alarmists that no one be allowed to enter the lists against them is proof not of strength, but of extreme weakness.

— Dr. Robert Zubrin is president of Pioneer Energy of Lakewood, Colo., and the author of The Case for Mars: The Plan to Settle the Red Planet and Why We Must and Merchants of Despair: Radical Environmentalists, Criminal Pseudo-Scientists, and the Fatal Cult of Antihumanism.