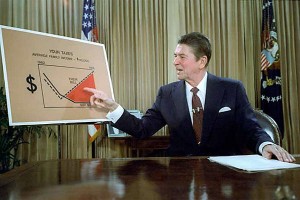 Maybe you don’t like tax day … [because] it reminds you of how high taxes are—and you think that, because of those high taxes, the economy grows more slowly. That would mean fewer jobs and less pay for you—and the country as a whole. It’s not a crazy argument … But the evidence for this point of view turns out to be thinner than you’ve probably heard. Relative to other countries, tax rates in the U.S. are relatively low, even when you throw in local and state taxes and add them to federal levies. Overall, according to the Tax Policy Center and Center on Budget and Policy Priorities … taxes in the U.S. are among the lowest in the developed world. The average for countries in the Organization for Economic Cooperation and Development, an organization of rich countries, is higher. And in countries like Sweden, Norway, and the Netherlands countries, the average is much higher. In those nations, taxes account for more than half of total national income.

That level may sound scary but, as many of us have written before, you could make a good case that the people of Scandinavia and Northern Europe know what they are doing. They are far more secure, thanks not only to national health insurance but also to generous provision of child care and unemployment benefits. And despite the high tax burden, their economies have historically been strong—in part, because the combination of investment and a secure safety net makes people more comfortable with a dynamic, ever-changing economy. The wonks used to call this economic model “flexicurity.”

As conservatives like New York Times columnist Ross Douthat note, you can’t simply import that model to the U.S. wholesale. But the Scandinavian experience is one reason that many economists and policy experts think there’s room for U.S. taxes to rise ….

1) It’s true that the U.S. has a lower tax burden than most developed countries. It’s also the case that the U.S. is much, much richer than most developed countries, in ways that a casual trip to Paris or London or Stockholm can sometimes obscure. The I.M.F.’s numbers have our purchasing-power-adjusted per capita G.D.P. at $53,101, which is slightly lower than oil-rich Norway (and Luxembourg) but more than $10,000 higher than Sweden and more than $15,000 higher than Denmark; most of the rich European economies are clumped together between the mid-thirties (where you’ll find the French) and the low forties (where you’ll find the Germans). Now: This wealth gap doesn’t necessarily prove anything about the link between low taxes and growth, since the U.S. has basically always been richer and (as Cohn notes) many of the social democracies have grown at a very respectable rate, in per capita terms, over the last few generations. But if you flashed back to the 1970s, you would find a number of very smart people who expected northern Europe (and Japan) to achieve more than respectable growth, and do more than just keep up with U.S. growth: They expected, for plausible theoretical reasons, that we would see continued convergence between the American economy and its developed-world competitors. And that, to put it mildly, did not happen; instead, post-Reagan, the social democracies actually slipped back a bit. So without claiming anything dispositive, I would be much more cautious than Cohn about the claim that growth and tax rates are unrelated, and much, much more hesitant about treating major tax increases as basically a free lunch.

2) And speaking of that free lunch … it’s also quite possible that the European economic story would look rather different, and rather less impressive, if American political economy had always looked more Swedish or French, and hadn’t pursued growth and innovation at quite the same frantic, Anglo-Saxon pace. This is, again, a highly contentious topic, but there’s a certain plausibility to the idea that (in the language of Daron Acemoglu and James Robinson) the developed world’s different tax-and-transfer models are actually complementary “flavors,” and that in a world where rich economies all converged on a single “cuddly” model of capitalism everyone — poor Scandinavians as well as rich Americans — would, on a long time horizon, eventually end up worse off. (Here it’s also worth pointing that if these complementarities and spillover effects do exist, the sheer size of the U.S. economy means that “Europeanizing” our tax-and-transfer model would represent a much more high-stakes roll of the global-economic dice than the kind of “bringing a lone outlier closer to the norm” scenario that country-by-country comparisons sometimes evoke.)

3) Then on what you might call the question of implementation, Cohn concedes the very general point that we can’t simply impose Swedish structures on the United States and call it a day, but he doesn’t address the more specific problem suggested by that concession: Namely, that a lot of liberal proposals essentially ask us to assume that American government — the quasi-imperial government of a vast, diverse, immigrant-heavy continent of three hundred million people — can somehow, in some future dispensation, approach the efficiency of welfare states administered on a much smaller scale and for a much more homogenous population. Which is to say, they wave away one of the central problem with existing public outlays in the U.S., which in other contexts they’re happy to highlight — the absence, in core areas like health care and education, of a clear link between increased spending and better outcomes. Or else they acknowledge the link, but assert that the best way to reform our kludgeocracy is to pursue greater efficiency in program design while simultaneously pouring more money into the system overall — using a heaping-full of sugar to make the medicine go down, if you will. (This was the basic theory of Obamacare, and also of more bipartisan reforms like No Child Left Behind.) It isn’t a crazy theory, but I think it’s reasonable to worry that in a system as inefficient and cross-pressured as ours, the sugar simply offsets or counteracts the medicine’s effects. And that possibility makes a strong case for holding the tax burden constant while seeking de-kludge-ification, rather than pre-emptively handing more money to bureaucracies and programs that aren’t exactly being managed with Nordic efficiency, and aren’t showing the most impressive of results.

To the foregoing I’d add one further, non-rebutting point: Namely, that regardless of whether one prefers Scandinavian-style social democracy to a lower-tax, more laissez-faire-ish mixed economy on moral grounds, the case for higher taxes gets stronger to the extent that the U.S. model doesn’t seem to be working on its own terms. By this I mean that all systems involve trade-offs, and our model is no different: American-style capitalism promises higher living standards overall in exchange for higher individual risks; faster growth rates in exchange for greater inequality; lower unemployment rates in exchange for fewer workplace protections; more liberty for innovators and entrepreneurs in exchange for somewhat less solidarity-as-redistribution. But if this promise isn’t being fulfilled, as has been the case in the last decade — if only the rich are seeing income gains, if the pace of growth and innovation are slowing even as inequality gets wider, if workforce participation is actually dropping below the European norm — then it’s inevitable that the model itself will start to bleed support. So at least part of the left-right divide at the moment (visible in the Picketty discussion, the guaranteed-income vogue, and the like) is over whether we should accept this breakdown, this failure of the American promise, as a permanent feature of our political economy — in which case the argument for high taxes does look stronger, because there’s less to lose — or whether we should still be making policy on the assumption that while the 2000s may have been a lost decade for the American dream, a revival of our model’s advantages is still a real, worth-desiring possibility.

Ross Douthat is an Op-Ed columnist for The New York Times.