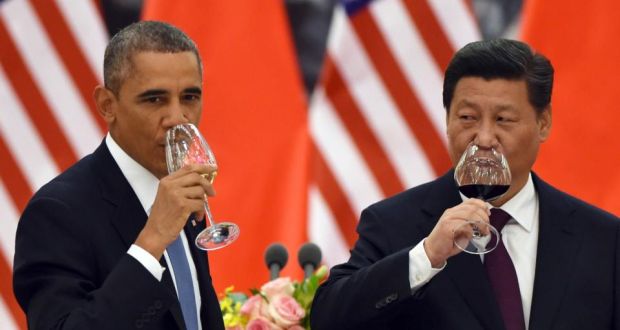 Historic. Such is the ubiquitous description of the climate agreement recently announced in Beijing between Barack Obama and Xi Jinping in which China promised for the first time to cap carbon emissions.

If this were a real breakthrough, I’d be an enthusiastic supporter. I have long advocated for a tangible global agreement to curb carbon. I do remain skeptical about the arrogant, ignorant claim that climate science is “settled,” that it can predict with accuracy future “global warming” effects and that therefore we must cut emissions radically, immediately and unilaterally if necessary, even at potentially ruinous economic and social cost.

I nonetheless believe (and have written since 1988) that pumping increasing amounts of CO2 into the atmosphere cannot be a good thing. We don’t know nearly enough about the planet’s homeostatic mechanisms for dealing with it, but prudence would dictate reducing CO2 emissions when and where we can.

However, anything beyond that, especially the radical unilateralism advocated by climate alarmists, would be not just economic suicide but economic suicide without purpose. It would do nothing to reduce atmospheric CO2 as long as China, India and the other developing nations more than make up for our cuts with their huge and increasing carbon emissions.

China alone is firing up a new coal plant every eight to 10 days. We could close every coal mine in Kentucky and West Virginia and achieve absolutely nothing except devastating Appalachia and, in effect, shipping its economic lifeblood to China.

The only way forward on greenhouse gases is global reduction by global agreement. A pact with China would be a good start.

Unfortunately, the Obama-Xi agreement is nothing of the sort. It is a fraud of Gruberian (as in Jonathan) proportions. Its main plank commits China to begin cutting carbon emissions 16 years from now. On the other hand, the United States, having already cut more carbon emissions than any nation on earth since 2005, must now double its current rate of carbon cutting to meet a new, more restrictive goal by 2025. In return for which, China will keep increasing its carbon emissions year after year throughout that period — and for five years beyond.

If this sounds like the most one-sided deal since Manhattan sold for $24 in 1626, you heard right. It becomes even more absurd when you realize that, according to the Lawrence Berkeley National Laboratory, China was on track to plateau its carbon emissions around 2030 anyway because of a projected slowdown in urbanization, population growth and heavy industry production. We cut, they coast.

Proponents of the Obama-Xi deal will then point to a second provision: China’s promise to produce 20 percent of its energy from non-carbon sources by 2030. But China had already been planning to begin substituting for its immense use of fossil fuels (mainly by using nuclear power) because Chinese cities are being choked to death by their traditional pollutants — sulfur dioxide, nitrogen oxide, mercury compounds, particulates, etc.

These are serious health hazards. CO2 is not. Whatever its atmospheric effects, CO2 does not poison the air. So in return for yet another Chinese transition that has nothing to do with CO2, Obama has committed the United States to drastic CO2 cuts.

Moreover, beyond substance, there is process. Or more accurately, its absence. What’s the structure to sustain and verify the agreement? Where are the benchmarks? What are the enforcement mechanisms? This is just a verbal promise. Nothing more. Sixteen years from now, China is supposed to remind the world of its commitments and begin cutting?

I repeat: I would unequivocally support a real agreement with the Chinese where they cut contemporaneously and commensurately with the United States and where there is built-in reporting and independent verification. Such a bilateral agreement would need to be internationalized by bringing in such rising powers as India, Brazil, Indonesia, etc. This would be a breakthrough.

Climate enthusiasts will say that I refuse to take yes for an answer. Of course I would take yes for an answer. But the Obama-Xi agreement is not yes. It is “check back with me in 16 years.” Aren’t the people advocating this deal the same garment-rending climate apocalypticists who’ve been warning of irreversible planetary changes beginning now, and the supreme imperative of acting immediately?