The Democrats’ Crusade To End The Filibuster Finally Pays Off 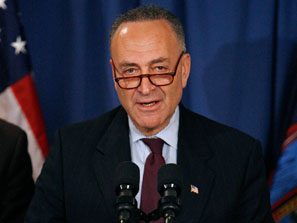 It looks like Senate Democrats have the 41 votes they need to block the nomination of Neil Gorsuch to the Supreme Court. This means majority leader Mitch McConnell is almost surely going to use the nuclear option to confirm him. Which is a shame.

We can only assume this is what Chuck Schumer intended. The minority leader knows full well that, one way or another, Gorsuch would be on the court. Perhaps the nuclear option was fait accompli, but with nothing to show for the 2016 election thus far, Republicans need a tangible victory.

Schumer probably also believes Republicans would nuke the judicial filibuster on the next Supreme Court pick, anyway. He’s probably right. So what downside is there for him in forcing the GOP to put the filibuster out of its misery? The fate of the justices remains unchanged. And, when back in power, Democrats would be free to function without the judicial filibuster. Schumer would almost certainly nuke it, as well. In the meantime, he forces the Republicans to officially kill a procedure that Democrats have been undermining for 15 years, at least.

No one in Washington is innocent. But on a number of occasions, Democrats created hyperpoliticized precedents on judges. Let’s not go back to Bork or Thomas, but after the 2000 election, when George W. Bush nominated eleven appellate court nominees. Two of them, as a gesture of bipartisanship, were liberals. When the Senate unexpectedly flipped to Democrats (because of the defection of Jim Jeffords, who began caucusing with Democrats), the Judiciary Committee did not return the favor, refusing to give hearings to any of the conservative nominees while moving the liberal ones forward.

When the Senate went back to the GOP, Democrats pulled off the first successful partisan filibuster of judicial nomination, targeting Miguel Estrada, a nominee for the D.C. Circuit court. Priscilla Owen, William H. Pryor, Janice Rogers Brown were all later confirmed in “Gang of 14” agreement.*

Ten years later, when similar tactics worked against them, the Democrats changed the Senate rules in 2013 to eliminate the 60-vote procedural threshold on lower court judges. Senate Majority Leader Harry Reid, the man who once argued that weakening the Senate filibuster would “destroy the very checks and balances our Founding Fathers put in place to prevent absolute power by any one branch of government,” was upset that Republicans had adopted the Democrats’ playbook.

It’s worth remembering that when Reid broke the filibuster, he claimed the GOP could have avoided the nuclear option if they’d simply confirmed the seven appointees they’d been blocking. According to Politico, McConnell conceded to those demands to save the filibuster. At the last moment, Reid insisted that Republicans surrender the threat of filibustering any Obama’s appointments in the future. Which is as good as killing it.

We should also note that Reid, when he was confident that Hillary Clinton would be president, bragged about laying the groundwork for doing away with the filibuster for Supreme Court nominees. In a “wide-ranging” interview about his “legacy”—which, in reality, was handing the Senate and Supreme Court to the conservatives—he said:

“I really do believe that I have set the Senate so when I leave, we’re going to be able to get judges done with a majority. It takes only a simple majority anymore. And, it’s clear to me that if the Republicans try to filibuster another circuit court judge, but especially a Supreme Court justice, I’ve told ’em how and I’ve done it, not just talking about it. I did it in changing the rules of the Senate. It’ll have to be done again.”

Obama named two justices to the high court. If it were up to Dems, the GOP president would be able to name none. That’s an untenable position. What kind of political party is going to preserve the filibuster in these conditions? Not one that hopes to keep its majority.

Watching hypocrites make earnest arguments for and against the exact same positions within a few months’ time is the norm. It’s certainly the norm when it comes to the filibuster, on both sides. In a better world, a “gang” of Senators would figure out some deal to save the filibuster on SCOTUS nominees—perhaps trading the Gorsuch nomination for a 10-year agreement to avoid the nuclear option. In today’s environment, though, prudence is punished and sectarianism is

Democrats are free to “obstruct” — as they might have put it only a few months ago — anyone they like. Yet, whereas Republicans’ case to stop Merrick Garland was one that both parties had at one time adopted, the arguments against Gorsuch are preposterous. The most prevalent is to accuse him of following the law rather than rendering judgement based on class, ethnicity, or gender of victim. Forget process, this an argument against the Constitution. The truth is no conservative judge would be good enough. So there was no way to avoid this moment.

The filibuster is—or, I guess it was—used preserve the (small c) conservative disposition of the Senate. A filibuster diffuses political power and compels the majority to offer concessions to the minority—or to keep the status quo. For a while there, most politicians protected the filibuster; not for idealistic reasons, I imagine, but because they understood power was not perpetual and it might be useful for them in the future.

That was until they believed history was theirs. Many liberals—Ezra Klein used to boast about his anti-filibuster position on Twitter bio—campaigned to eliminate this protection when they thought the presidency would never be lost. Then again, the Left has always been more prone to support direct democracy, including campaigning to get rid of the Electoral College long before the results of 2016. Meaningless repetition of the nonexistent “popular vote” is only the latest in this destructive trend. The end of the filibuster is a manifestation of this work. Congrats.