The Difference It Makes

“‘What difference does it make?’ This question is the timeless unspoken question in all political discussion and debate. Or should be.” 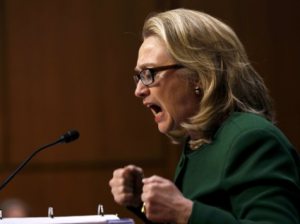 It matters because she only posits two alternatives as to what happened in Benghazi: First, “a protest” of a faux movie, second, “guys out for a walk one night” who decide on the fly to do mischief. She and the Obama administration are still unwilling to acknowledge terror.

It matters because one would need to know the cause of an attack, so as to better plan how to prevent another.

It matters because presidential administrations should neither dissemble nor divert the nation’s focus from the truth about key national policy. Especially regarding national security.

“What difference does it make?” This question is the timeless unspoken question in all political discussion. Or should be.

It is easy to predict that this will not be the last time we hear this question on this issue. It will also be asked regarding other important political questions. The unintended consequence of willful ignorance, or, worse, willful dissembling of the cause(s) of what happens to American policy and foreign relations matters. “What difference” indeed.

Commentary from various sources on what difference it makes:

Carol Platt Liebau at Townhall.com — So “What Difference . . . Does It Make?” 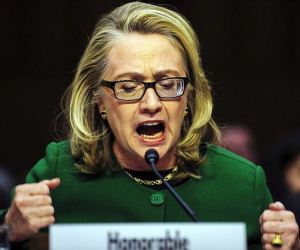 There are a few observations that this exchange prompts:

1. Since the early 90’s, Americans have been well-acquainted with the Clintons’ tenuous relationship with the truth. . . . In Clinton-world, it may make no difference that Americans were systematically misled by their government about the cause and circumstances of a catastrophic security failure and terrorist attack — even when the truth was readily ascertainable (and perhaps known by at least some of those promoting an erroneous version).

2. Clinton’s frustrated question lets slip the familiar liberal contempt both for members of the other party and for the “regular Americans” they represent.  [It was] a stab at savvy “crisis control” in the midst of a presidential campaign. . . . They are fair questions, and her efforts to dodge them by claiming a desire to prevent future attacks are specious. Nothing says a government can’t both prevent similar catastrophes in the future and simultaneously give a full and accurate accounting of what happened in the past. In fact, the latter is a prerequisite of the former.  Surely someone who famously worked for the Watergate committee can understand how Americans might be curious about whether there was deliberate deception at the highest levels of their government.

3. Her question highlights once again the fact that Hillary Clinton is just not a very good politician — and never has been. She is by all accounts a highly-intelligent and hardworking public servant, but no born politician would allow such a soundbite to escape his (or her) lips even by accident. If she does decide to run again for President in 2016, expect to see this clip. It shows a certain lack of empathy and understanding that may well resonate with the public. Even if there were no issues of public concern at stake, the reasons and circumstances under which their loved ones died make a great deal of difference to the families of Ambassador Stevens, former Navy SEAL Glenn Doughery, Air Force veteran Sean Smith, and former Navy SEAL and bronze star winner . . . Tyrone Woods.

Ed Morrissey at Hotair.com — What difference does it make if there were no protests in Benghazi? 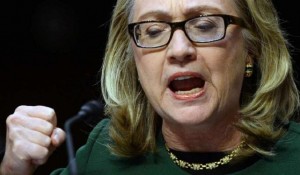 I can think of a few reasons why it matters. First, it mattered enough for the Obama administration to send Susan Rice to five different Sunday talk shows to insist that the sacking was a spontaneous demonstration of anger over a months-old YouTube video, while saying that there was “no evidence” that it was a terrorist attack. . . .

It also matters because Barack Obama at the time had been bragging about crippling al-Qaeda while on the campaign trail. That false narrative made it seem as though State and our intel community couldn’t have possibly known that the sacking would have occurred, and got blindsided by a grassroots reaction to the video. Instead, it turned out to be a planned terrorist action about which the US embassy in Libya had warned State for months, repeatedly requesting more security. . . .

So it matters because of credibility. There doesn’t seem to be any [credibility] at the White House or State on any of these issues, nor answers to questions of what exactly this administration did to prepare for the inevitable outcome of its own policies in Libya and the broader Arab Spring. It matters because those policies are going to get more people killed than just the four Americans in Benghazi last September, and already have.

Commentary at The Inquisitr — Hillary Clinton Benghazi Testimony: ‘What Difference Does It Make?’ 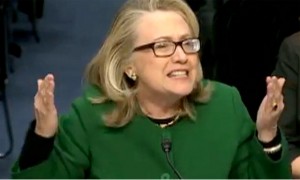 Hillary Clinton [asked] “what difference does it make” for the reasons that the American people were purposefully misled on the Benghazi terrorist attacks. Some people believe the difference lies in whether or not the Benghazi cover up was arranged in order to protect President Obama during his re-election. . . .

As previously reported by The Inquisitr, Charlene Lamb is the State Department official who resigned after the “systemic breakdown” cited by an Accountability Review Board. Hillary Clinton accepted all 29 of its Benghazi recommendations, but the ARB did not point any fingers or place blame on any particular person for why Benghazi was allowed to happen in the first place. . . .

Charlene Lamb is allegedly directly responsible for lowering the number of diplomatic security agents from 34 to just three by first pushing for requests for help to not be made, claiming there were political reasons for this decision. Then, when continued levels of good protection were requested in spite of her demands, she ignored them anyway. What we don’t know yet is who else in the Obama administration or the State Department gave Charlene Lamb the idea that there was “too much political cost” for keeping the security forces at safer levels.

James Taranto at the Wall Street Journal — ‘What Difference . . . Does It Make?’ 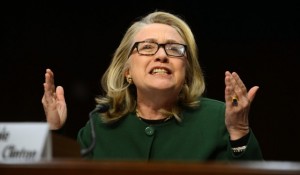 Hillary Clinton is ending her tenure as secretary of state in fiery fashion. “You really get the sense that [Mrs.] Clinton barely managed to restrain herself from dropping an F-bomb there,” remarks New York magazine’s Dan Amira. . . .

Commentary’s Jonathan Tobin [answers the question]: “The answer to her question is clear. An administration that sought, for political purposes, to give the American people the idea that al-Qaeda had been ‘decimated’ and was effectively out of commission had a clear motive during a presidential campaign to mislead the public about Benghazi. The fact that questions are still unanswered about this crime and that Clinton and President Obama seem more interested in burying this story along with the four Americans that died is an outrage that won’t be forgotten.”

Especially if she runs for president in 2016. As we watched this exchange, it occurred to us that Mrs. Clinton was back in a familiar role, and an ironic one for someone who is supposed to be a feminist icon. Once again, she was helping the most powerful man in the world dodge accountability for scandalous behavior. Almost exactly 15 years ago, on Jan. 27, 1998, then-First Lady Clinton went on NBC’s ‘Today’ show amid rumors that her husband had carried on a sexual affair with a lowly subordinate in the Oval Office: “The great story here, for anybody willing to find it and write about it and explain it, is this vast right-wing conspiracy that has been conspiring against my husband since the day he announced for president.” . . .

Amy Davidson in the New Yorker — Hillary Clinton’s Benghazi Testimony: What difference will it make? 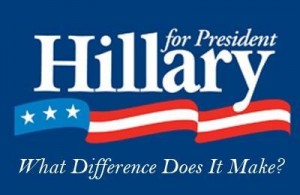 Senator Rand Paul, of Kentucky, took the approach of impeaching her leadership, strongly suggesting that she was a well-meaning showboater who hadn’t done the work she needed to do to keep her staff safe, contributing to the death of four American diplomats in an attack on the consulate last September. “Had I been President at the time, and I found that you did not read the cables from Benghazi, you did not read the cables from Ambassador Stevens—I would have relieved you of your post. I think it’s inexcusable.” . . .

“What difference, at this point, does it make?” . . . The line alone, though, sounds painfully dismissive. The Times’ Lede blog points out that #WhatDifferenceDoesItMake is already a hashtag, and not one used by Hillary fans. Her unfortunate defense might be that the reading of the line depends on what the meaning of “it” is. . . .

If she had not gotten into the fight with Johnson, the memorable moment might have been when she choked up talking about the four diplomats. But by the end she looked like a woman who thought that she was stooping to appear in this venue. The question now is whether that approach suits a 2016 candidate well, or badly. . . .