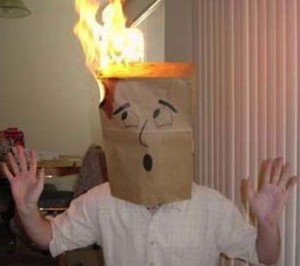 It was offered to CBS News’ Sharyl Attkisson by an anonymous aide involved in the White House’s disastrous response to the attacks in Benghazi, Libya.

Well-intentioned human error rarely gets the credit it deserves. People want to connect the dots, but that’s only possible when you assume that all events were deliberately orchestrated by human will. This is the delusion at the heart of all conspiracy theorists, from Kennedy assassination crackpots to 9/11 “truthers.”

Behind all such delusions is the assumption that government officials we don’t like are omnicompetent and entirely malevolent. The truth is closer to the opposite. They mean well but can’t do very much very well.

It’s been a while since we had a self-styled redeemer president. John F. Kennedy surely dabbled in the myth that experts could solve all of our problems, though much of JFK’s messianic status was imposed on him posthumously by the media and intellectuals. You really have to go back to Franklin D. Roosevelt or Woodrow Wilson to find a president who pushed the salvific powers of politics as much as Barack Obama.

His presidency has been grounded in the fantasy that there’s “nothing we can’t do” through government action if we just put all our faith in it — and, by extension, in him. We are the ones we’ve been waiting for, he tells us, and if we just give over to a post-political spirit, where we put aside our differences, the way America (allegedly) did during other “Sputnik moments” (one of his favorite phrases), we can give “jobs to the jobless,” heal the planet, even “create a kingdom [of heaven] right here on Earth.”

For Obama, the only things separating America from redemption are politics, specifically obstruction from unhinged Republicans and others clinging to outdated and vaguely illegitimate motives. Opposition to gun control is irrational because the “government is us.” Reject warnings “that tyranny is always lurking,” he told the graduating class at Ohio State, because a self-governing people cannot tyrannize themselves.

But, suddenly, when the administration finds itself ensnared by errors of its own making, the curtain is drawn back on the cult of expertise and the fantasy of statist redemption. Early on in the IRS scandal, before the agency’s initial lies were exposed, David Axelrod defended the administration on the grounds that the “government is so vast” the president “can’t know” what’s going on “underneath” him. Of course, it was Obama who once said, “I know more about policies on any particular issue than my policy directors.”

That is, when things are going relatively well. When scandal hits the fan, he goes from the “government is us” to talking of his own agencies the way a czar might dismiss an injustice in some Siberian backwater. The hubris of omnicompetence gives way to “lighten up, we’re idiots.”

Many of his defenders now rush to insist that it’s unfair to hold him to too high a standard. He’s just a man, just a politician. Well, duh.

Meanwhile, Obama insists that he is outraged. And, if sincere, that’s nice. But so what? What the president seems to have never fully understood is that the Founders were smarter than he is or that the American people aren’t as dumb as he thinks we are. His outrage is beside the point.

A free people will have legitimate differences on questions of policy. A government as vast as ours is — never mind as vast Obama wants it to be — is destined to abuse its power, particularly in a climate where a savior-president is incessantly delegitimizing dissent (and journalistic scrutiny). Government officials will behave like idiots sometimes, not because they are individually dumb but because a government that takes on too much will make an idiot out of anyone who thinks there’s no limit to what it can do. That alone is good reason to fear tyranny. Indeed, it would be idiotic not to.

Jonah Goldberg is a syndicated columnist and Editor-at-Large for National Review Online. This article originally appeared in Real Clear Politics.