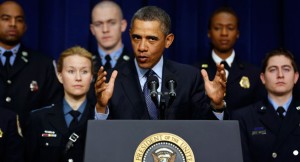 As in: Batten down the hatches — the sequester will cut $85 billion from this year’s $3.6 trillion budget! Or: Head for the storm cellar — spending will be cut 2.3 percent! Or: Washington chain-saw massacre — we must scrape by on 97.7 percent of current spending! Or: Chaos is coming because the sequester will cut a sum $25 billion larger than was just shoveled out the door (supposedly, but not actually) for victims of Hurricane Sandy! Or: Heaven forfend, the sequester will cut 47 percent as much as was spent on the AIG bailout! Or: Famine, pestilence and locusts will come when the sequester causes federal spending over 10 years to plummet from $46 trillion all the way down to $44.8 trillion! Or: Grass will grow in the streets of America’s cities if the domestic agencies whose budgets have increased 17 percent under President Obama must endure a 5 percent cut!

The sequester has forced liberals to clarify their conviction that whatever the government’s size is at any moment, it is the bare minimum necessary to forestall intolerable suffering. At his unintentionally hilarious hysteria session Tuesday, Obama said: The sequester’s “meat-cleaver approach” of “severe,” “arbitrary” and “brutal” cuts will “eviscerate” education, energy and medical research spending. “And already, the threat of these cuts has forced the Navy to delay an aircraft carrier that was supposed to deploy to the Persian Gulf.”

“Forced”? The Navy did indeed cite the sequester when delaying deployment of the USS Truman. In the high-stakes pressure campaign against Iran’s nuclear weapons program, U.S. policy has been to have two carriers in nearby waters. Yet the Navy is saying it cannot find cuts to programs or deployments less essential than the Truman deployment. The Navy’s participation in the political campaign to pressure Congress into unraveling the sequester is crude, obvious and shameful, and it should earn the Navy’s budget especially skeptical scrutiny by Congress.

The Defense Department’s civilian employment has grown 17 percent since 2002. In 2012, defense spending on civilian personnel was 21 percent higher than in 2002. And the Truman must stay in Norfolk? This is, strictly speaking, unbelievable.

Obama, who believes government spends money more constructively than do those who earn it, warns that the sequester’s budgetary nicks, amounting to one-half of 1 percent of gross domestic product, will derail the economy. A similar jeremiad was heard in 1943 when economist Paul Samuelson, whose Keynesian assumptions have trickled down to Obama, said postwar cuts in government would mean “the greatest period of unemployment and industrial dislocation which any economy has ever faced.”

Federal spending did indeed shrink an enormous 40 percent in one year. And the economy boomed.

Because crises are government’s excuse for growing, liberalism’s motto is: Never let a crisis go unfabricated. But its promiscuous production of crises has made them boring.

Remember when, in the 1980s, thousands died from cancers caused by insufficient regulation of the chemical Alar sprayed on apples? No, you don’t because this alarming prediction fizzled. Alar was not, after all, a risk.

Remember when “a major cooling of the climate” was “widely considered inevitable” (New York Times, May 21, 1975) with “extensive Northern Hemisphere glaciation” (Science magazine, Dec. 10, 1976) which must “stand alongside nuclear war as a likely source of wholesale death and misery” (International Wildlife, July 1975)? Remember reports that “the world’s climatologists are agreed” that we must “prepare for the next ice age” (Science Digest, February 1973)? Armadillos were leaving Nebraska, heading south, and heat-loving snails were scampering southward from European forests (Christian Science Monitor, Aug. 27, 1974). Newsweek (April 28, 1975) said meteorologists were “almost unanimous” that cooling would “reduce agricultural productivity.”

Today, while Obama prepares a governmental power grab to combat global warming, sensible Americans, tuckered out with apocalypse fatigue, are yawning through the catastrophe du jour, the sequester. They say: Cry “Havoc!” and let slip the hamsters of sequestration.