Freedom Centers Constitutional and Political Freedom The Most Trusted Name in Healthcare News? ...

The Most Trusted Name in Healthcare News? 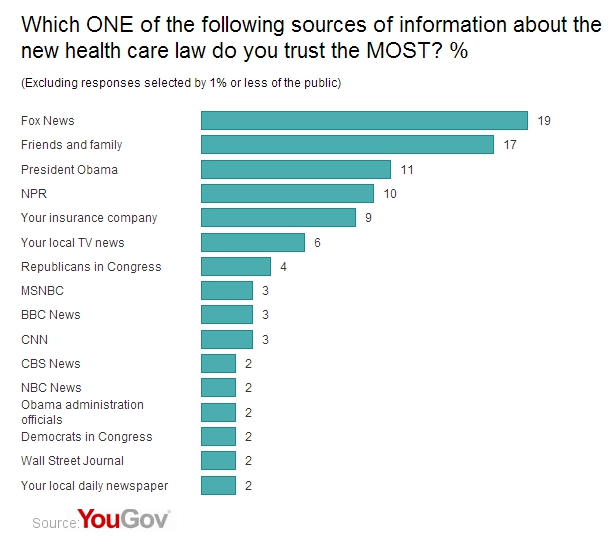 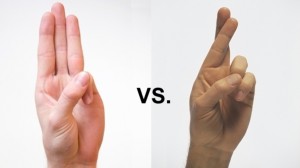 Fox News is the most trusted source of information on the new health care law for 19% of Americans – ahead of President Obama and other major networks.

The fight over President Barack Obama’s health care reform law, the Affordable Care Act (ACA), has been one of the most contentious and bitter battles in domestic politics in recent memory. Media coverage of the issue has been particularly important, with the ins and outs of the passage and enactment of the law often dominating headlines. But information from politicians, government officials and insurance companies has also played a prominent role, with President Obama recently coming under fire after a key health care-related campaign promise – that Americans who liked their existing healthcare insurance plans could keep them – was cast into doubt.

The latest research from YouGov shows that when Americans are asked to pick the one source of information about the new health care law that they trust the most, Fox News Channel (also known as Fox News) tops the list. Most trusted by 19% of Americans, the basic cable news channel narrowly beats out ‘friends and family’ (17%).

President Obama (11%) is the third most trusted source, followed by National Public Radio (10%) and people’s own insurance companies (9%).

Nearly half of Republicans – 45% – say that they trust Fox News the most to provide them with information about the new health care law, followed in a distant second by friends and family with 19%. Democrats, on the other hand, are markedly less likely to say that they trust President Obama the most, with 23% saying he is the best source of information on the law. And even among Democrats Fox News (7%) does surprisingly well, ranking as the fifth most trusted source of news among Democrats.

When Americans are asked how much they trust Fox News, partisan differences are also evident. Republicans (61%) are almost twice as likely to trust its reports on the health care law as Democrats (31%), while Independents are evenly split, with 39% trusting Fox News at least somewhat but 39% not trusting Fox News much at all.

However, while Fox News is more trusted on the healthcare law than all other major cable news channels, it is not as well-trusted as local TV news channels.

45% tend to trust their local TV news on the new law, while only 33% – the lowest figure for any TV source – distrust it. The least-trusted TV news is from Al Jazeera and MSNBC, both of which have the highest net distrust ratings of -26% and -14%, respectively.

This poll was conducted and this article was published by YouGov.com.