The multiple flaws and risks in Hillary Clinton’s email evasions 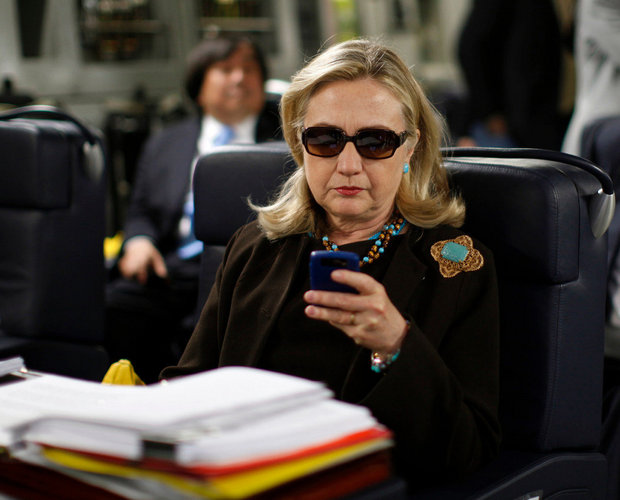 In this Oct. 18, 2011, file photo, then-Secretary of State Hillary Rodham Clinton checks her Blackberry from a desk inside a C-17 military plane upon her departure from Malta, in the Mediterranean Sea, bound for Tripoli, Libya. Her use of a private email server to send all her emails while in office — including ones that may have been classified — has become an issue as she tries for the Democratic nomination in the 2016 presidential race. (Kevin Lamarque, Pool, AP Photo, File, 2011)

To mangle Sir Walter Scott’s famous quote as it might apply to Hillary Clinton’s emails — ‘Oh what a tangled mess we made, when first we practiced to evade.”

Hillary Clinton as U.S. secretary of state from January 2009 to February 2013 chose to shield all her email traffic from snoopy journalists and lawmakers by using a private email server at her Chappaqua, New York home.

How she managed that email was then entirely up to her, even though it was official government policy, including State Department policy — i.e., the policy of the department she led — to preserve emails in an official archive. She did not do so — nor, unsurprisingly, given her example, did most of her underlings who used official state.gov emails, according to a recent State Department inspector general’s report.

Since Clinton mingled personal and official emails, it also was up to her to determine what to turn over when asked for official emails, and also to make sure that what she communicated via email did not include classified material. She has long maintained that none of her email communications involved classified information.

That, it turns out, is a matter of interpretation. The intelligence community’s inspector general has now determined that some of Clinton’s emails — among the more than 30,000 she turned over last December pursuant to a State Department request — contain classified material from intelligence sources. He found four such emails among a limited sampling of 40 he reviewed. That suggests there are a lot more.

A fifth email related to the 2012 Benghazi terrorist assault that left four Americans dead, including the U.S. ambassador to Libya — an email that already has been made public as part of the State Department’s rolling release of Clinton’s emails — also reportedly contains classified information.

Significantly, the intelligence community’s inspector general, I. Charles McCullough III, has determined that the information was classified at the time Clinton sent and/or received it — and thus should not have been on unsecured email at all. Nor should it now, potentially, remain within the bowels of Clinton’s private server (even though she maintains she’s destroyed all the emails) or on a thumb drive purportedly in the possession of her lawyer, David Kendall.

The security implications of this finding have prompted McCullough to refer the matter “to security officials within the Executive Branch” as a “potential compromise of classified information.”

ABOUT OUR EDITORIALS
Editorials express the view of the editorial board of The Plain Dealer and Northeast Ohio Media Group — the senior leadership and editorial-writing staff. As is traditional, editorials are unsigned and intended to be seen as the voice of the newspaper.
• Talk about the topic of this editorial in the comments below.

• Send a letter to the editor, which will be considered for print publication.

• Email general questions or comments about the editorial board to Elizabeth Sullivan, opinion director for the Northeast Ohio Media Group.

A State Department spokesman, Mark Toner, suggested to reporters July 24 that the department does not believe Clinton was sending classified information at the time she was secretary of state — even though the department has been “upgrading” the classification level of hundreds of her emails after review. Supposedly, that reflects subsequent sensitivity — but it stretches credulity to believe that what’s considered secret now wasn’t secret then.

For Clinton, as secretary of state, to have failed to note that material in her emails should have been classified and then to fail to remove it to a secure channel, if true, is a potentially serious security violation.

Bradley Moss, a Washington, D.C., attorney, told McClatchy reporters that this situation “is exactly why use of private emails … is not supposed to be allowed.”

But there’s an even bigger lesson here: the apparent ham-handedness — still — of the U.S. State Department in handling potentially sensitive and secret information and keeping those communications secure at the same time it meets basic responsibilities under federal law to provide information that should be public to the public when it asks.

The Associated Press, irate at foot-dragging over public records requests that go back to Clinton’s tenure at the top of the State Department (when her private emails kept them from reporters’ eyes), filed a lawsuit in March that’s resulted in a federal judge expressing open impatience with State over delays in giving AP basic data, such as Clinton’s schedules and calendar.

At the same time, the State Department has used pressure from that judge to keep releasing Clinton documents as an excuse for why it can’t comply with recent intelligence community requests to do more to make sure that additional secrets aren’t revealed. McCullough is also concerned that State is not using a “top-secret”-rated system to review Clinton’s emails, putting more information at risk of disclosure. State Department officials counter they don’t have the money to upgrade from a “secret” system.

Yes, swirling around all of this is the fact that Clinton is currently the leading Democratic candidate for president in 2016 and Republicans would like nothing better than to wound her candidacy. Partisan politics certainly is at play.

But much more is at stake. The whole episode has its roots not just in Clinton’s multiple failures but also in the failures of the State Department to implement and sustain systems to assure that secrets stay secret and documents that should be made public are provided to the public in a timely way.

That’s beyond troubling. Clinton seeks to become president and commander in chief, but if McCullough’s findings are correct, she was at best inattentive about her handling of intelligence secrets when she was secretary of state even as she worked to shield her activities from public view. If that’s not a disqualification from the White House, it’s hard to imagine what is.