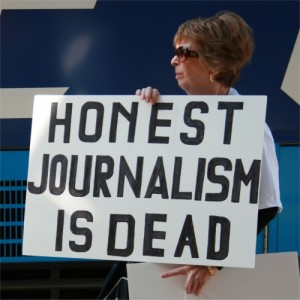 Where is the feeding frenzy on the Libya story?

Where is the Benghazi media feeding frenzy?

I don’t think there’s a conspiracy at work. Rather, I think journalists tend to act on their instincts. And, collectively, the mainstream media’s instincts run liberal.

In 2000, a Democratic operative orchestrated an “October surprise” attack on George W. Bush, revealing that 24 years earlier, he’d been arrested for drunken driving. The media went into a feeding frenzy.

“Is all the 24-hour coverage of Bush’s 24-year-old DUI arrest the product of a liberal media almost drunk on the idea of sinking him, or is it a legitimate, indeed unavoidable news story?” asked Howard Kurtz on his CNN show “Reliable Sources.” The consensus among the guests: It wasn’t a legitimate news story. But the media kept going with it.

One could go on and on. In September 2004, former CBS titan Dan Rather gambled his entire career on a story about Bush’s service in the National Guard. His instincts were so powerful, he didn’t thoroughly check the documents he relied on, which were forgeries.

Oh, there have been conservative feeding frenzies: about Barack Obama’s pastor, John Kerry’s embellishments of his war record, etc. But the mainstream media usually tasks itself with debunking and dispelling such “hysteria.”

Last week, Fox News correspondent Jennifer Griffin reported that sources on the ground in Libya say they pleaded for support during the attack on the Benghazi consulate that led to the deaths of four Americans. They were allegedly told twice to “stand down.” Worse, there are suggestions that significant military resources were available to counterattack, but requests for help were denied.

If true, the White House’s concerted effort to blame the attack on a video crumbles, as do several other fraudulent claims. Yet, last Friday, the president boasted, “The minute I found out what was happening” in Benghazi, he ordered that everything possible be done to protect our personnel. That’s either untrue, or he’s being disobeyed on grave matters.

Yet Fox News is alone in treating the story like it’s a big deal. During the less significant Valerie Plame scandal, reporters camped out on the front lawns of Karl Rove and other Bush White House staff. Did Obama confiscate those journalists’ sleeping bags?

Of the five news shows last Sunday, only “Fox News Sunday” treated this as a major story. On the other four, the issue came up only when Republicans mentioned it. “Meet the Press” host David Gregory shushed a guest who tried to bring up the subject, saying, “Let’s get to Libya a little bit later.” He never did, but he saved plenty of time to dive deep into the question of what Indiana Senate candidate Richard Mourdock’s comments on abortion and rape mean for the Romney campaign.

I’m willing to believe that journalists like Gregory are sincere in their desire to play it straight. But among those who don’t share his instincts, it’s hard to distinguish between conspiracy and groupthink. Indeed, it’s hard to think why one should even bother trying to make that distinction at all.

Jonah Goldberg was the founding editor of National Review Online and is currently editor-at-large of NRO. He is a columnist for The Los Angeles Times.